After a trip to New York in July, my friend and TradeSmith CEO Keith Kaplan shared how he started experiencing aches, chills, and other symptoms of an oncoming sickness.

He turned to his usual cure-all, which is a jump in a cold plunge tub he bought for his basement.

The benefits are supposed to be tremendous — reducing chronic pain, providing immune system support, lowering inflammation — and Keith said he felt almost as good as new the day after his cold plunge.

He did admit that the first few moments of any cold plunge are a shock to the system, followed by pins-and-needles pain, but when you’re done, you come out the other side all the better for it.

And we talked about how that’s a lot like investing… specifically when it comes to dumping your losers.

When you start thinking about selling a stock that isn’t living up to your hopes, you know it’s going to be unpleasant to sell it.

And once you hit the sell button, it can feel like a shock to your system, filled with pain and discomfort.

With 2023 almost upon us, I’m sure there are stocks lurking in your portfolio that need the “cold plunge treatment” to make sure you’re strongly positioned for the new year.

Stocks that you may have bought as a “lottery ticket.”

Or stocks that lured you in with high dividend yields.

Or stocks that originally seemed certain to weather sky-high inflation and economic downturns.

No matter the reasoning, it’s time to prepare yourself for the shock that will come with the “cold plunge” of selling off these stocks. Because just as important as knowing what to buy is knowing what to avoid and get rid of. In Part 1 of my 2023 Investing Preparation series, I’m going to share the first three stocks that shouldn’t be anywhere near your portfolio in 2023.


Stocks That Shouldn’t Be in Any Portfolios, No. 1: AMC Entertainment Holdings Inc. (AMC)

If you’re a retiree who jumped into AMC just to see how the meme stock mania would play out, kick it out of your portfolio as soon as possible.

Movie theaters were already seeing a decline in ticket sales before the pandemic, as there are more options than ever to watch something through streaming services and premium channels.

After all, if I wanted to see “Top Gun: Maverick” in theaters this summer, I could have burned through gas getting to the theater, gone around in circles in the parking lot to find a decent spot, spent $15 on a bag of popcorn and a drink just for myself, and then hoped I wouldn’t have someone sitting behind me who wanted to talk during the whole movie.

Or… I could spend $49.99 for a one-year subscription to Paramount+ and wait only 45 days after the movie’s initial release to watch it from the comfort of my own home.

So while moviegoing habits have already been changing, the lockdowns from COVID-19 sent the decline in ticket sales into overdrive. 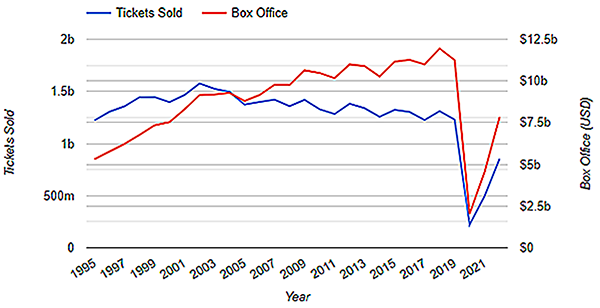 Source: TheNumbers.com
AMC’s financials alone would make me stay away from this stock, as “good news” for the company is when it loses less money than it did a year ago.

In the first quarter of 2022, AMC reported a loss of $337 million, which was good news compared to the $567 million it lost one year earlier.

The sour cherry on top was that AMC Entertainment Holdings reported NEGATIVE free cash flow of $134.8 million. After paying off operating expenses and capital expenditures, AMC doesn’t have money left over to start chipping away at its debt of $5.5 billion.

But to add even more reasons to boot this company from a retiree’s portfolio, AMC is performing gimmicks like selling preferred shares of itself under the ticker symbol APE, a nod to meme-stock investors.

It also purchased a $27.9 million stake in Hycroft Mining Holdings (HYMC), a gold miner that is beleaguered by its own heavy debt load, that also experienced a near brush with bankruptcy, and that adds no fundamental value to AMC.

Looking at Tradesmith’s Volatility Quotient (VQ), AMC is listed at 95%, making it one of the riskiest stocks you could possibly own.

To keep your golden years golden and not lose sleep over a company that will just lose you money, make sure AMC is nowhere near your portfolio.

Stocks That Shouldn’t Be in Any Portfolios, No. 2: Whirlpool Corp. (WHR)

Whirlpool Corp. is known for its Whirlpool and KitchenAid brands, which offer appliances such as refrigerators, washers and dryers, and microwaves.

It’s not the most exciting business in the world, but those products bring in a lot of money: Whirlpool reported $22 billion in sales in 2021, a company record.

The company currently has a nice-sized dividend yield of 5.19% and has made shareholder-friendly moves, approving $2 billion in February 2022 for stock buybacks on top of the $1.5 billion still available in the buyback program at the end of 2021.

On the surface, this would seem to be a good company to own during economic turmoil, as people will always need appliances to make meals and do laundry.

So why would I label this a problem company that you need to get rid of as soon as possible?

The biggest problem is the nature of purchasing appliances.

Yes, everyone needs a refrigerator.

But it’s not a purchase that’s going to be made every year, as the products Whirlpool sells tend to last decades:

What helps fuel new purchases is high demand for new homes, as everything from dishwashers to clothes dryers needs to be installed. Also, folks selling their homes may replace old appliances to make their house more attractive to potential buyers.

If you’ve been following the housing market, you know that demand has cooled and is bordering now on “freezing.”

With 30-year mortgage rates bouncing around between 6.5% and 6.8%, people who previously wanted to buy a home are being priced out and forced to sit on the sidelines.

And the cracks are already starting to show for Whirlpool.

As of this writing, WHR is down nearly 40% this year, and I expect anyone who keeps this stock in their portfolio to feel even more pain ahead.


Stocks That Shouldn’t Be in Any Portfolios, No. 3: Tractor Supply Co. (TSCO)

When you hear the words “retail stores,” images of Walmart Inc. (WMT) or Target Corp. (TGT) may immediately enter your mind, but there’s another big retailer out there that has even more stores than Target: Tractor Supply Co.

Tractor Supply Co. serves a more niche client base, focusing on ranchers and hobby farmers. The company says “customers find everything they need to maintain their farms, ranches, homes, and animals” at its stores, including lawn and garden tools, fencing, chicken coops, animal feed, work clothing, and much more.

But that niche market hasn’t meant a lack of revenue.

Before and after the pandemic, the company has increased how much money it brings in each and every year.


Most recently, Tractor Supply Co. had a strong second quarter, reporting that net sales increased 8.4% year-over-year from $3.6 billion to $3.9 billion.

It also made the shareholder-friendly move of repurchasing $188.2 million worth of stock, and it rewards shareholders with a 1.9% dividend yield.

With all the positive results, this stock may seem like one you’d want to own rather than avoid, but again, we’re looking at issues lurking under the surface that will affect the company’s results moving forward… evaporating your hard-earned money.

Again, even though we can’t make an apples-to-apples comparison between Tractor Supply Co. and Walmart or Target, they are all still retailers dealing with similar issues, such as higher transportation and labor costs.

In February, the company was already looking at ways to cut costs, which interestingly included hiring more people to its financial analysis team to figure out how to save money.

In early 2021, Tractor Supply Co. Chief Financial Officer Kurt Barton told The Wall Street Journal that the company expected costs for goods and transportation to increase by 2% to 3% that year.

The costs increased by 9% during the fourth quarter.

And the company still doesn’t seem to have a game plan for addressing the issue.

There is only so much of those costs that the company can pass on to consumers, and it can’t keep bringing up inflation and transportation costs as issues — it needs to find a workaround.

Revenue for the year is on pace to exceed 2021 numbers, but the revenue growth isn’t going to keep up with the blistering percentage increases from the past two years.

TSCO is already down 16.26% this year, so make sure it’s not anywhere near your portfolio to avoid the further pain that likely lies ahead.

I’ll follow up soon with two more companies you’ll want to make sure are not in your portfolio heading into the new year.