What do they all have in common?

The first commonality is that three different companies that produce those products or offer those services all have beaten-down stock prices.

The second is that when you take a closer look, all of those companies have some positive things going for them that could make them diamonds in the rough.

To kick it off, let’s take a look at a stock I NEVER thought I’d consider…

When I was growing up, you couldn’t say the word “technology” without referring to IBM.

This company owned the market for mainframes (computers primarily used by large organizations for things like processing transactions and data) for the better part of two decades.

And then it all changed.

IBM failed to recognize the importance of computers heading beyond corporate offices and into the homes of Americans through the birth of personal computing. Profits started to slide; the company reported a $4.97 billion loss in 1992, which at the time was the biggest loss in American corporate history.

In April 1993, Louis Gerstner Jr. stepped in and was credited with getting the company back on its feet, but in more recent times, the stock price has been a massive laggard not only in the tech world, but also compared to the S&P 500.

So, why would I be interested in a stock with such a lackluster history? We need to look at the current situation as well as what’s on the horizon.

IBM is benefiting from strong demand for its hybrid cloud and artificial intelligence solutions, which is leading to growth in both its software and consulting business. This is also helped by the company’s acquisition of Red Hat in 2019, which IBM touted as a move that would position it as a “leading hybrid cloud provider.”

Additionally, investments in blockchain and quantum computing have put IBM at the forefront of current technology trends.

IBM is also one of the few technology stocks in TradeSmith’s Green Zone. And according to our proprietary data, it’s one of the highest-conviction stocks in the sector.

Let’s take a look at why.

First and foremost, this stock offers a dividend yield of 4.75%.

So not only does IBM have stock-price appreciation potential because of its growth opportunities in the tech sector, but it pays a nice-sized dividend to boot.

With free cash flow, a company can buy back shares, make acquisitions, invest in growth initiatives, and pay out higher dividends, among other things.

All in all, this is a value play in the beaten-down tech sector with some serious heft. I think most folks are still stuck thinking about where IBM has been and not where it could be going.

When you pick up your prescription or a bottle of aspirin at the store, do you ever wonder how it got there?

And one of the largest players in the group is McKesson Corp. In 2020, the company shared that it delivers one-third of all pharmaceuticals used in North America.

For those who aren’t familiar, McKesson distributes branded and generic drugs along with other health care products around the world. Additionally, the company has expanded into prescription technology and medical-surgical solutions.

This stock caught my eye because it happens to be one of the strongest bullish trends in health care I’ve seen in quite a while. 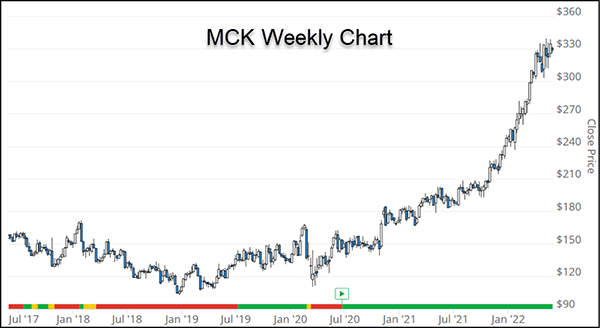 The weekly chart above shows the Health Indicator at the bottom. McKesson has managed to stay in the Green Zone since the pandemic lows, an anomaly among health care stocks.

Now, from a valuation standpoint, McKesson isn’t as attractive as IBM. The dividend yield of 0.57% isn’t anything to write home about.

But the company still generated nearly $3.9 billion in free cash flow over the past 12 months. And the company has been buying back shares at a steady pace for the last decade.

So although this isn’t the cheapest stock out there, it still falls into my diamond-in-the-rough category.

For those of you who aren’t familiar with this company because you don’t have small children trying to drag you into one of its stores, Build-A-Bear Workshop sells teddy bears and other stuffed animals and characters.

The company built a loyal following through its interactive stores where patrons can design their own unique stuffed animal. 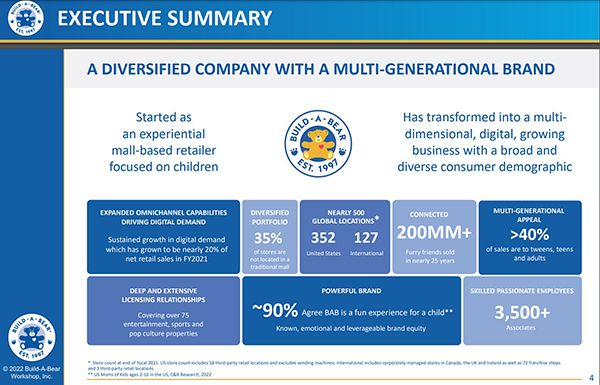 Source: Build-A-Bear Workshop Inc. Presentation
A business model doesn’t get much simpler than that.

For the better part of the last decade, revenues declined slowly each year.

The pandemic also took a major bite out of sales.

Yet the company bounced back in the last 12 months with revenues and margins higher than they’ve ever been.

So, is there still meat left on the bone?

Considering that quarterly revenues continue to climb, I think so.

Last quarter’s sales were 28.4% higher year-over-year at $117 million, a record first-quarter revenue figure for the company.

And while the company doesn’t pay a dividend or buy back shares, it only has about 16 million shares outstanding.

Stocks with low floats like this are often susceptible to short squeezes, where increases in the stock’s share price create a buying frenzy as short sellers close out their positions.

Similar to McKesson’s stock, shares of Build-A-Bear have also remained in the Green Zone since January 2021.

Not too shabby, if you ask me.

Believe it or not, there are a lot more stocks out there with strong trends, decent fundamentals, and Green Zone status.

Those are all things we can look for to help shape our investment decisions.

I keep hammering on this, but even with sky-high inflation and fears of a recession on the horizon, there are still ways to profit when you follow a plan and don’t let emotions get the best of you.

In fact, we recently shared a famous example of an investor who let emotions get the best of them and how to avoid what they did.

You can find it here.