When inflation reached a 40-year high in March, it was clear that the Federal Reserve would be reaching into its limited tool kit and do whatever it could to slow down inflation.

And more recently, statements fresh from the committee suggest that the Fed is ready and willing to push the economy into a recession through higher rates if necessary.

Thankfully, a few data points imply this may not be necessary.

In the last few weeks, I’ve come across three signs inflation might finally be slowing.

Today, I’m going to walk through each sign and explain what I see as the implications for each.

While existing home sales are more indicative of the broader trends, new home sales can act as a leading indicator in terms of both volume and inventory.

Source: U.S. Census Bureau
On the left-hand side, you can see the number of new houses sold along with the inventory available.

That’s the lowest number of new houses sold since 2019, and it puts us squarely back in line with historical averages. 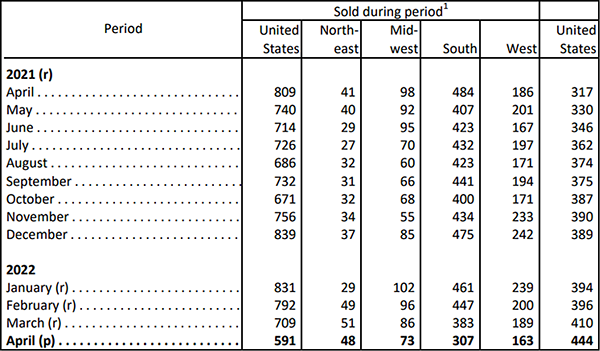 Source: U.S. Census Bureau
This table above provides the raw sales data of the number of units sold during each period, with the exception of the far-right column.

The April figures across the bottom highlight just how low the sales pace was. That pushed inventory up, which isn’t necessarily a bad thing. Higher inventory puts pressure on sales prices, which is ultimately what the Fed wants.

In fact, I want to see inventories expand for a little bit. That would dampen demand for new home construction and remodeling, which would lower demand for commodity products like lumber and steel.


Speaking of lumber and steel…

2. The Prices of Several Commodities Plummeted

In 2020, our first indication that heavy inflation was on the horizon came from lumber.

Source: TradingView
In the chart above, you can see the rise in 2020 that pushed the price of lumber per 1,000 board feet over $800 before it retreated.

While many thought that might have been a fluke, lumber again soared in 2021 to more than double that price.

Although the price backed down, it jumped again in early 2022.

Now it rests around $567 per 1,000 board feet, close to the normal historical range.

But could this be a fluke as well?

Other commodity prices suggest not.

Recently, the price of hot rolled steel cratered after seeing a rise in early 2022, similar to lumber. 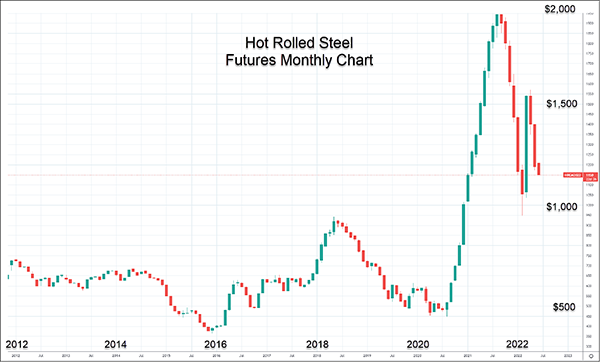 Source: TradingView
While steel prices remain well above historic levels, there’s reason to believe this downward trend could be real.

Aside from decreased housing construction, Argus Media Group noted that Amazon pulled back from warehouse construction and expansion, and it could have an impact on steelmakers. “The company now is working to cut back on its warehouse expenditures after overbuilding, after Amazon spent approximately $18 billion on fulfillment center warehouses in the 12 months leading to 31 March. Some steelmakers have recently made downstream investments in businesses that produce products for such warehouses,” the report from Argus Media Group stated.

Aside from all the issues mentioned earlier, the X factor in this mess is China. COVID-19 lockdowns closed factories, dampening industrial demand for the past few months.

Now, with cases falling and lockdowns subsiding, demand for steel should increase. However, we don’t know how much inventory currently sits in warehouses and on factory floors.

Plus, if U.S. aggregate demand falls, it could curtail Chinese exports. 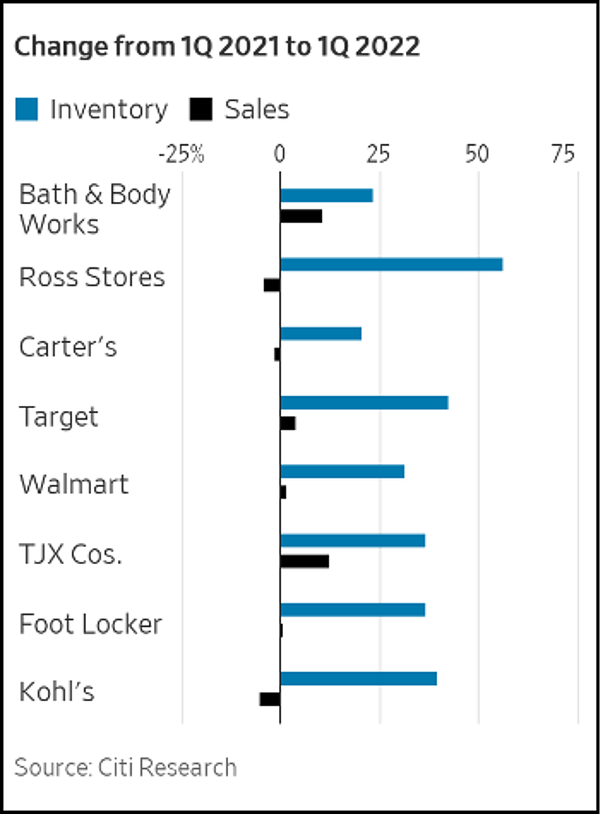 But the issue of retailers having to discount prices to move excessive amounts of unsold merchandise appears to be more about timing than insufficient demand.

As noted in the Wall Street Journal article, supply chain snarls put products on the shelves after the demand for those products passed. Think of Kohl’s (KSS) ordering a bunch of fleece hoodies to sell in the winter and the shipments being delayed by months, leaving the company with too much heavy clothing to sell in the spring when the weather is starting to warm up.

The delay in receiving inventory has left retailers with excess stock they have to discount to move, which hurts even more during a time like this because the cost to get those goods could have been higher than normal.

The good news for retailers is that freight rates appear to be on the decline.

While truck shipment bid prices haven’t dropped much, ocean freight prices have, which can cut down on overall costs for retailers.

Fears of a recession are still lingering, but the good news is that lower inflation readings should temper the Fed’s need to raise interest rates.

That’s great news for growth stocks, like tech companies, which have seen shares decimated in the last few months.

We’ll know more in the coming months, so stay diligent.

Polish up your watchlists, analyze your portfolio to see if you are overleveraged in certain positions, and consider using options strategies that can minimize risk and maximize reward, and you’ll be in a great position to handle anything the market throws at you.

Speaking of which, I would love to hear from you about the strategies you are using and the moves you are making in these current market conditions.

Drop me a note and let me know.

We’re Not in the Millionaire-Making Meme-Stock Days, But It’s Not All Doom and Gloom