Last month, I wrote to you about the so-called January Barometer. In a nutshell, this indicator says: “As January goes, so goes the rest of the year.”

This seasonal tendency for the stock market to either rise or fall in the first month of the year has an uncanny ability to predict stock returns for the rest of the year.

And as you probably know by now, this year’s January Barometer results are not good news for stocks in 2022. But as a counterpoint, investor sentiment just reached such a bearish extreme last week that it’s actually bullish!

Here are the details. 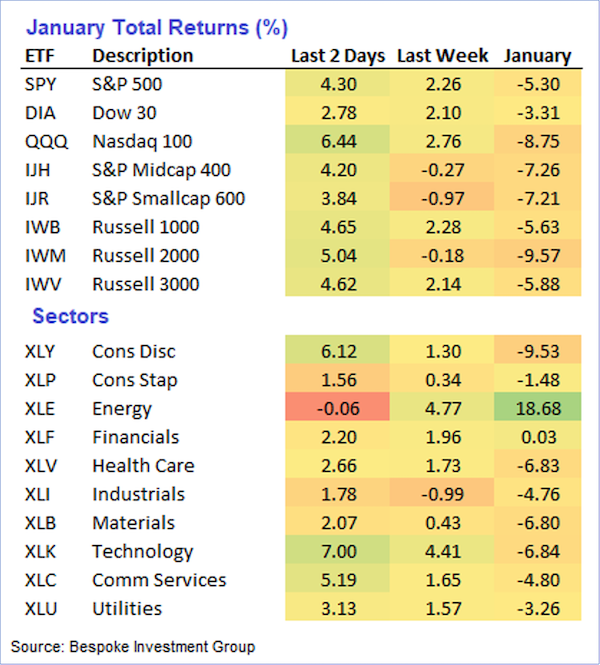 The S&P 500 (SPX) rallied 2.3% last week, but not enough to save the index from a 5.3% January decline. It was the worst monthly performance for SPX since the COVID crash in March 2020.

It also made the “Bottom 5” list of worst January returns, going all the way back to 1980.

Moving on, the Nasdaq 100 (NDX) performed even worse: down 8.75% last month. And going from bad to worse, the Russell 2000 (IWM) small-caps dropped 9.6% in January. In fact, IWM is the first notable index in our Markets dashboard to fall into the Red Zone, which it did last week.

Not much good (other than energy), just bad and ugly performances last month, as you can see in the table above.

Now let’s revisit SPX to see what a poor January showing has to say about the likely direction for stocks over the rest of this year. Here are the stats since 1980 from DataTrek Research:

Bottom line is, when stocks drop in January (typically a positive month), watch out.

We should all be prepared for both lower stock returns and higher volatility this year. And that has been the main theme of my recent TradeSmith Daily commentaries.

There is also a positive in the current stock market outlook; namely, sentiment stinks right now. And from a contrarian point of view, that’s bullish.

The chart below shows the latest reading from the American Association of Individual Investors (AAII) market sentiment survey. It’s a poll that’s been conducted weekly since 1987 to measure whether retail investors’ six-month outlook is bullish or bearish. 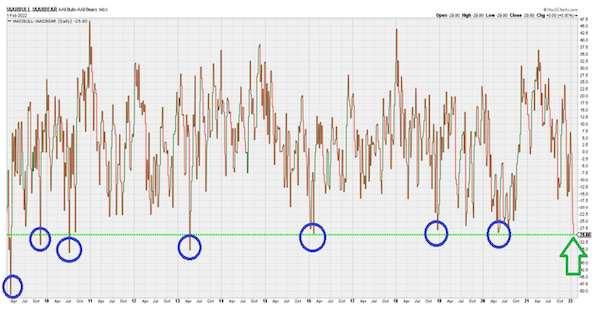 You can see when retail investor sentiment drops to extremely bearish levels at the points circled in blue. Current sentiment, at the green arrow, just reached the lowest point since 2013 (fourth circle from the left). And it’s not far from the extreme low near the market bottom in the 2009 financial crisis.

In fact, nearly every time an extreme low in retail investor sentiment was triggered, it marked a great buying opportunity for stocks.

It may seem counterintuitive, but often the best time to buy stocks is when most investors are running scared. And we are there right now following the recent market correction.

Of course, there is no guarantee this sentiment indicator will work as advertised this time around. But as Warren Buffett once said, it pays to “be greedy when others are fearful.”


Fortunately, we don’t have to guess whether the market correction is over. We can simply let our trusty TradeSmith Market Health indicators guide us.

At the end of last week, several important indexes on our Market Outlook page were in the Yellow Zone, which is a caution signal for those stocks.

But what a difference a few days of upside price action can make.

As of Wednesday, NDX, MID, and SML all have moved back into the Green Zone. However, IWM remains in the Red Zone and should be avoided for now.

That’s a positive sign of improving stock market health, which could mean the recent correction is over. We shall see. But I’ll be watching these indicators closely for more improvement, and you should too.