What do you do when a traditional “safe haven” investment loses money?

That’s what people are asking themselves as U.S. government bonds just finished their worst quarter (down 5.6%) since record-keeping began in 1973.

Flip through the headlines from CNBC to Bloomberg and you’re bound to find multiple stories claiming the death of the bond market. The cases made in those stories have valid reasoning, and in the years to come, I fully expect the price of U.S. Treasuries to plunge as yields rise.

However, that doesn’t mean I expect this to happen immediately, and I believe there are ways to make short-term profits…

There is good reason to believe that U.S. Treasuries could rally for several months, climbing the “wall of worry.”

Keep in mind that this thesis is a short-term trade, not a long-term outlook or investment.

Let me lay out my contrarian viewpoint and let you decide for yourself.


Contrarian Point No. 1: Too Many Bears

Misattributed to Warren Buffett, the following memorable quote was delivered by Baron Rothschild in the 19th century:


“Buy when there’s blood in the streets, even if the blood is your own.”
Sentiment is so incredibly bearish for U.S. Treasury bonds, I can’t help but believe we’ll see a snap back in the other direction.

Take a look at the following chart of the TLT ETF, which holds U.S. Treasury Bonds with 20-plus years until maturity. 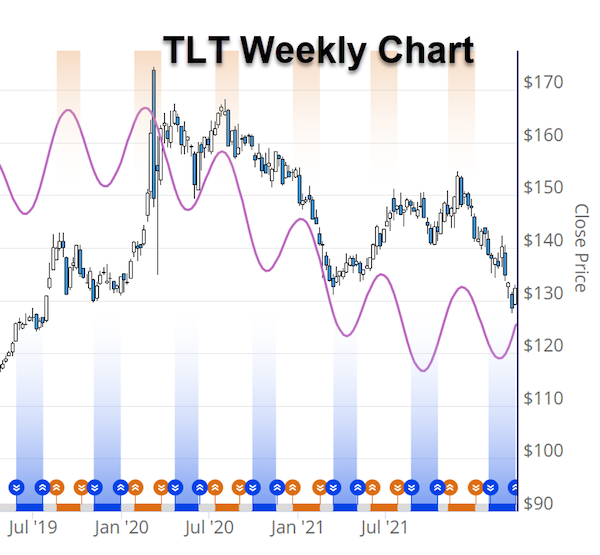 First, the purple line draws out various cycles in the price movement of TLT, using our proprietary algorithm.

That ties into the blue and orange sections in the chart above. Our system divides the chart into different segments, highlighting peaks and valleys within the cycles.

These elements form what’s known as cycle analysis. Cycles forecast when we might see a turn in a stock or the market.

In this analysis of the TLT, which coincides with the price of long-term U.S. Treasury debt prices, we just concluded a valley portion of the cycle, as denoted by the blue circle with the upward-pointing arrows.

This also coincides with long-term support at $130 in the TLT ETF. 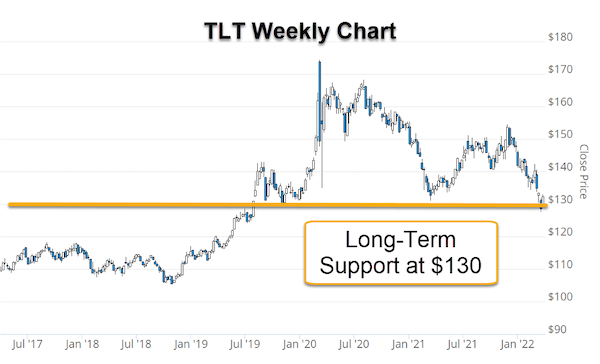 Source: TradeSmith Finance
How do we know that $130 acts as price support? When we look back in time, we see that once the TLT rose above that level, it came back down and tested that level but never dropped below it for very long.

When two technical indicators point to a possible reversal, we need to pay attention.

But that’s not the only reason U.S. Treasuries might rally in the near future.

Contrarian Point No. 2: Best on the Block

Now, let me ask you, would you buy a 10-year government bond from Germany that yields 0.5%? No?

Here’s a list of 27 countries with lower yields on their 10-year debt than the U.S.

All of these play into the push and pull of supply and demand on the price of government debt.

Yet it’s hard to believe that an average investor would look at this list and think it better to invest in comparable debt from Spain, France, or the U.K.

One of the key drivers in each country, much like in the U.S., is the central bank.

Central banks for each country operate independently, with their own directives and goals.

And just like the Federal Reserve, these central banks can and do manipulate the supply and demand of their own debt to drive rates higher or lower.

Speaking of the Federal Reserve, we come to the last reason the U.S. debt price may find a temporary bottom.

Right now, everyone is worried the Fed will raise rates too much and too fast, sending the economy into a recession in an effort to fight inflation.

But there’s reason to believe that inflation may begin to peak soon.

For example, energy prices have hit multi-year highs. And we’re now at the point of “demand destruction,” where prices get so high that consumer demand begins to dwindle.

Lowering demand this way is by no means ideal. But it may remove some of the reasons the Fed planned to raise interest rates.

There are also signs that even the modest rate increases we’ve seen could destroy demand for housing, one of the key growth sectors for the economy.

Mortgages for home purchases have begun to slow markedly as well.

As one of the biggest drivers of inflation, slowing home demand can and will certainly reduce the need for higher interest rates in the near term.

The two best instruments for trading long-term U.S. Treasury debt are the TLT and the TBT ETFs.

The TLT tracks the prices of a basket of U.S. Treasuries with 20-plus years left to maturity.

The TBT tracks the inverse prices of a basket of U.S. Treasuries with 20-plus years left to maturity.

Basically, the TLT is long 20-plus-year U.S. Treasury prices, while the TBT is short that same basket.

In the near term, if you accept the contrarian view, I like buying call options on the TLT as a way to trade this idea.

That defines the maximum amount I could possibly lose up front while giving me leveraged exposure to the upside should the TLT rise.

So, what’s your outlook for U.S. Treasuries and interest rates? Do you think the Fed will continue to raise rates aggressively or pull back?

Email me and let me know your thoughts.