Charles H. Dow, journalist, founder, and first editor of The Wall Street Journal, didn’t create Dow Theory all at once.

Instead, he slipped it in over 255 editorials written in The Wall Street Journal.

At its core, Dow Theory has six tenets.

It’s that fourth tenant that, I believe, needs to be updated.

You see, back in his day, industrials and transportation companies ruled the economy.

Consequently, Dow didn’t believe a bull market in industrials could occur unless the railway averages rallied as well — usually first.

In the 1800s, when manufacturers earned more, they tended to produce more. When they produced more, they shipped more.

So if investors wanted signs of manufacturing health, they could turn to shipping companies for confirmation.

However, that seems a bit out of date today.

I propose we use the following three sectors instead: transports, financials, and technology.

Let me explain why and show how you can use them to assess market health.

A Different Look at Transports

Even within the past 25 years, manufacturing has become a smaller part of our economy. 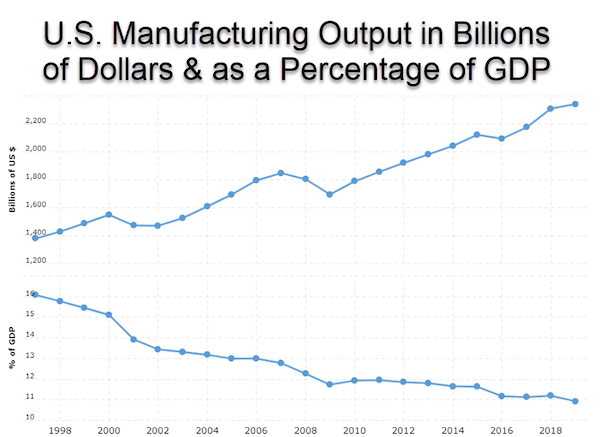 Source: Macrotrends
But we don’t consume fewer goods, do we?

Instead, the U.S. economy shifted to a service-based economy.

We provide various services to the world and import goods.

So transportation stocks are still relevant, just in a different way.

They give us a gauge of the health of the consumer, which is critical to markets. When we order more goods, one of two things happens: they ship or they go on back order.

Even with ports clogged, TradeSmith Finance lists the Dow Jones Transportation ETF (IYT) as in the Green Zone, though in a side-trend.

When you combine this technical analysis with economic data such as consumer spending, which went gangbusters this holiday season, you get a sense that markets are in great shape.

But that’s how things appear at the moment. What about down the road?

When companies and consumers want to spend on big projects like housing or business expansion, they turn to banks.

Loan-interest profits increase when interest rates go up and when the total loans outstanding increase.

Financial transactions, such as loan processing fees, increase as the demand for loans rises.

So when financial stocks rise, it’s typically an indication of higher economic activity. That’s especially true with regional banks, which are more geared toward making loans than larger financial institutions.

Looking at the Select Sector Financials ETF (XLF), not only does TradeSmith Finance show it as technically healthy in the Green Zone, but it has one of the highest percentages (95.52%) of healthy stocks in the Green Zone among all the sectors.

Similar to the transports, when we look at the technicals of the financial sector against the backdrop of strong housing and construction demand, we get a better sense of just how healthy the overall economy is.

There’s one last sector where we need to look, as it’s been a key growth engine for more than a decade.

If you could have invested in five stocks 10 years ago, which would you choose?

More than likely, you would choose technology stocks like Apple (AAPL) and Amazon (AMZN).

Technology stocks weren’t just intangible investments we held in our portfolios. They were investments in things we interacted with every day.

Here’s the thing. If you look at each industry’s contribution as a percentage of GDP, it might not be clear how important technology really is.

Source: Statista/Bureau of Economic Analysis
But here’s the interesting part.

A study from the Interactive Advertising Bureau (IAB) said that the internet economy grew seven times faster than the U.S. economy during the past four years and actually accounts for 12% of U.S. GDP.

Yet that only tells part of the story.

Take Tesla (TSLA), for example. The company is classified as a consumer cyclical auto manufacturer.

Amazon (AMZN) is classified as a consumer cyclical internet retailer.

I don’t know about you, but both of these act more like tech stocks to me. 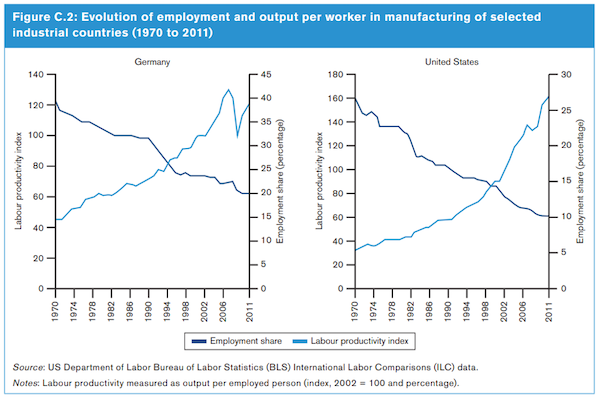 The graph above illustrates that productivity gains are not simply driven by technology; they’re accelerating.

That’s why technology stocks are critical not just to the U.S. but to the global economy.

And since they make up a huge chunk of the S&P 500 and Nasdaq 100 indexes, they’re critical to market performance.

Now, the technology sector is currently taking a bit of a breather.

When we dig into the health of each company in the Select Sector Technology ETF (XLK), we see the following:

What Conclusions Can We Draw?

We know that consumer demand is extremely healthy. And transportation stocks reflect this.

We also know that people want to borrow and build. And financial stocks reflect this.

But what does it mean when technology stocks don’t align?

Think about what’s happening right now. Supply chains are stuck because demand is too high and supply has become unreliable.

So businesses are spending money to build additional capacity, rather than improve their technology.

That doesn’t mean all technology stocks are seeing a rough patch. But it explains why semiconductor stocks, as measured by the VanEck Semiconductor ETF (SMH), are through the roof, while social media companies that rely on advertising revenue, such as Meta Platforms, Inc. (FB), Twitter (TWTR), and Snapchat (SNAP), aren’t performing as well.

By combining these three key sectors with our economic data and analysis of the news, we can paint a picture to explain not just what’s going on now, but also what we can expect in the coming months.

But if we could dig even deeper, which sub-sectors or industries do you think are leading indicators for the markets and economy? Let me know here. I can’t reply to every message, but I do read them all.