Imitation is the sincerest form of flattery, and when Amazon.com Inc. (AMZN) imitates a company, that company knows it must be doing something right.

The company in question is a fellow e-commerce company, but it focuses on small- to medium-sized businesses, a market that LikeFolio’s Vice President of Research Megan Brantley believes Amazon may have been ignoring.

Amazon is attempting to make up for that oversight by launching “Buy with Prime,” a feature that will allow merchants to sell outside Amazon’s marketplace but still use its payment and delivery services, giving businesses a more direct way to connect with consumers.

But as an imitator, not an originator, of this idea, Amazon lacks the first-mover advantage. And the company that claims that distinction has already become the biggest e-commerce software provider in the United States.


This company provides merchants with the ability to build their own online store without any coding knowledge, allowing them to get up and running quickly and connect with potential buyers all over the world.


On top of that, Megan’s research found a 12% YoY increase in consumer purchase intent mentions (when a person mentions on social media that they either intend to buy or recently bought a product/service).

Yet, as you can see from the green purchase intent mentions line and the white stock price performance line, there is divergence.

Like many tech stocks, this company’s stock was punished over the last year, but the increase in purchase intent mentions could indicate that this is a case of the stock being oversold.

So, what we have here is:

And in less than seven minutes, Megan can tell you everything you need to know about this company. 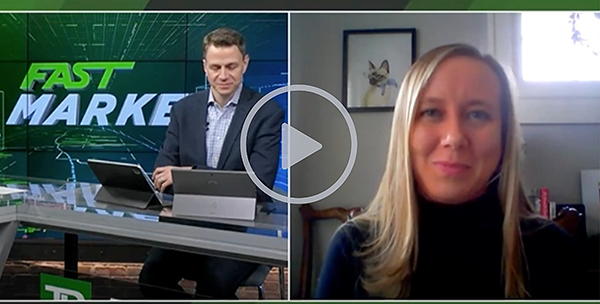 Bitcoin Has Gained 30% in 2023, but the Better Opportunity Lies in This Investable Sector