During a two-day session next week, Federal Reserve policymakers will consider the first central bank rate increase in two years — a move that could kick off the first credit-tightening campaign since the one that ran from June 2004 to June 2006.

This comes at a time when:

For America’s central bankers, the expected credit-tightening campaign is a balancing act, way up on the high wire: Move too aggressively to tame inflation, and the Fed runs the risk of tipping over the stock market and dumping the U.S. economy into recession; move too tepidly, and inflation takes hold, like a virulent infection that nothing seems to cure.

You can’t control what the Fed does.

But you can take control of your own situation, a stance that (let’s face it) “feels better” — increasing the likelihood that you’ll avoid the panicky moves that are the investing equivalent of a whack in the head.

And one move you can make right now — a move that forces you to be engaged and look for opportunities — is to create a watchlist of promising stocks that you’d like to own.

We’re going to use TradeSmith’s tools to help you do just that.

The consensus among analysts is that the first hike will be a quarter point (25 basis points), and the Fed has already signaled as much.

Yes, it could be even higher, but that’s not likely. Larger rate boosts usually come toward the end of a tightening cycle. Bank of America has projected as many as seven hikes this year, and Morgan Stanley is predicting six.

It makes sense: The unusually high levels of inflation, potential fallout from turmoil in Ukraine, and strengthening employment combine to warrant a full campaign of interest rate increases.

Over time, that can be tough on stock prices in general. But there are beneficiaries.

One sector to look at is Financials. It includes companies like banks, insurance firms, and brokerages, which typically benefit with expanding profits as rates move higher.

If these aren’t already part of your investment mix, I would consider starting a watchlist of leading stocks within those categories, such as:

Let’s look at Bank of America in deeper detail.

Banking on a Bounce Back

After a run of 16 months in the Green Zone, Bank of America dipped into the Yellow Zone on March 4. Exposure to the global economy makes BAC susceptible to geopolitical events, and analysts say BAC traded lower on concerns that sanctions from the Russia-Ukraine conflict would hit the banking giant hard.

Currently, BAC is in the cautionary Yellow Zone in a side-trend, but it’s only trading $3.32 (-7.5%) off where it was at the beginning of the year. A rate hike could influence the trend positively.

The Volatility Quotient (VQ) registers a medium level of risk at 27.73%, suggesting there’s room to run in either direction. Plus, our timing indicators specify that the stock is in a valley, which is a bullish signal on its own. Coupled with the potential benefits of higher rates, BAC could come roaring back. 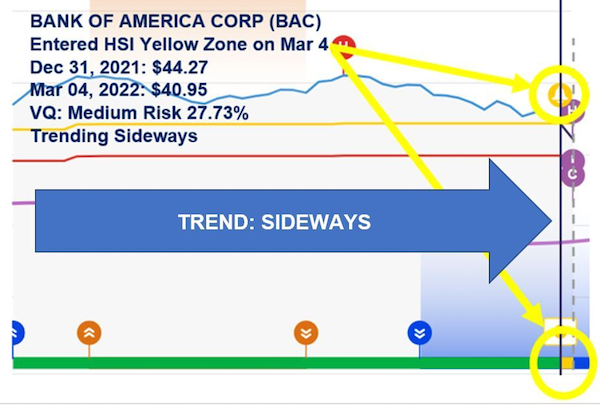 Homing in on Other Candidates

Financial stocks aren’t the only potential beneficiaries from the Fed’s inflation-fighting campaign.

A strong economy with lots of job openings helps fuel an inflationary surge. And it gives consumers the ability to splurge on home improvements, new cars, and new clothes.

That means it’s worth checking out the Consumer Discretionary sector for stocks to watch, including:

And finally, check out the Industrials sector for stocks on the move. Especially consider companies in the heating, ventilation, and air-conditioning (HVAC) business.

You may already have a basket of stocks you want to keep a close eye on during any changes to the federal funds rate. Outside of a few categories I’ve already mentioned, higher rates tend to bring many stock values down as less money enters the market.

At TradeSmith, we have the tools to help you manage the risks to your portfolio so you have a chance at keeping more of what you earn.

So tell me, what do you think? Will the Fed raise the federal funds rate, and if so, by how much, and for how long? Click here to let me know.

To Help Fight Off Inflation, This BUD’s for You

Contrarian Investing Made Easy (1 Tool to Use)