Happy New Year! Like most investors, you’re probably wondering how the stock market is destined to perform in the year ahead.

After all, the S&P 500 put up big numbers last year, rising (for its third positive year in a row) 26.9%. Will 2022 be the fourth consecutive year that stocks experience double-digit gains? Or will this year see a reversal of fortune to the downside?

To get a sneak peek at the answer, keep a watchful eye on how well stocks perform this week. The pivotal first week of January is often an accurate barometer for how the stock market performs over the full year.

The January Barometer is a market-forecasting indicator developed by Yale Hirsch, creator of the “Stock Trader’s Almanac,” in 1972. His research found that the direction the S&P 500 takes in January is a reliable predictor of full-year results with 85.7% accuracy.

Specifically, there are two parts to the January Barometer.

First, the S&P’s performance over the first five trading days of January is thought of as a reliable “Early Warning System” for the likely direction stocks will take during the first month of the year.

And second, the stock market’s return in January as a whole is a good predictor of the entire year’s results.

Since 1950, there have been 46 years in which the first five days of the new year posted positive returns; in 38 of those years, the S&P 500 went on to post full-year gains for an 82.6% accuracy rate. And the average gain for the benchmark index was well above average at 14.3%.

The entire month of January is an even more accurate predictor of full-year gains.

When the S&P 500 posted positive results in January, stocks went on to register positive gains 85.7% of the time. Plus, the index posted 17.6% average gains in those years!

Keep in mind, however, that the January Barometer and the Early Warning System are not infallible.

For instance, the January Barometer has posted some “false negative” readings over the years. In 13 out of the 27 years when stocks dropped in January, the stock market still ended higher for the full year, often with substantial gains.

And while the January Barometer has been right much more often than it has been wrong, there have been big misses in 10 of the past 71 years, leading to negative full-year results. But that still makes for a pretty darn good batting average.

In fact, only twice since 1950 have stocks suffered a decline of more than 10% for the full year after seeing positive returns in the month of January (in 1966 and 2001).

It’s interesting to note that the Early Warning System did accurately predict the positive performance of the market in each of the last two years (with the first five days up +1.4% in 2020 and +1.8% in 2021) even though the month of January was down.

Still, even in years when both January and full-year returns are positive, the S&P has suffered a median drawdown of about 9% at some point during the year.

The bottom line is that the January Barometer and the Early Warning System are right more often than they are wrong. And both have a solid track record of forecasting full-year results for the S&P 500. But, they are not always reliable market timing tools.

I’ll be watching the stock market’s results this week and over the course of January. But I’ll be paying even more attention to our exclusive TradeSmith Finance indicators of overall stock market health. 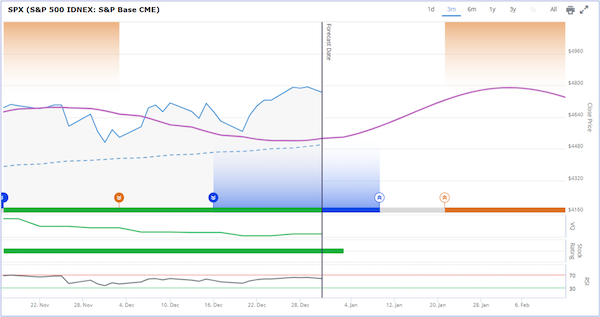 As you can see in the chart above, the S&P 500 Index remains in the Green Zone with an uptrend, and our timing model shows an upswing continuing this month with a potential peak sometime in February.

Meanwhile, our proprietary Health Distribution for the S&P 500 shows that 78.8% of stocks in the index are in the Green Zone and in a healthy state. 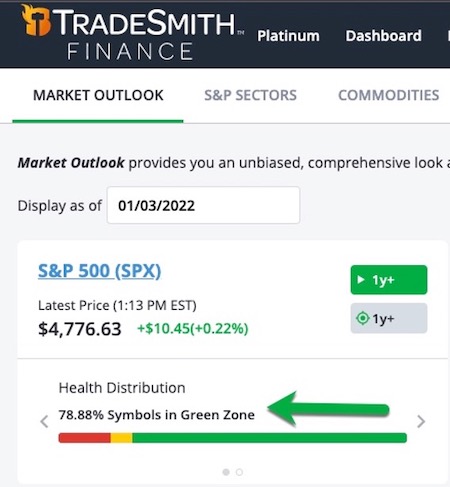 The January Barometer and the Early Warning System both have a solid track record of forecasting the stock market’s direction. But for my money, I have even more confidence in our TradeSmith Finance market indicators.