Editor’s Note: Today we’re bringing you a guest editorial from TradeSmith Senior Analyst Mike Burnick. We think you’ll appreciate his research and insights. Keith will return tomorrow with more thoughts on the market.
Russia is on the outs. After its unprovoked invasion of neighboring Ukraine in February, Moscow has been widely vilified and ostracized by most nations in the global community.

On top of that, Russian stocks have been booted out of the widely followed MSCI Emerging Markets (EM) Index. And therein lies an opportunity for other emerging markets that stand to benefit from cash flows out of Russia and into their own stock markets.

Just to recap, Moscow closed its main domestic stock exchange for an extended period after its invasion of Ukraine. As a result, dozens of Russian stocks listed on the London Stock Exchange and globally were suspended from trading.

At this point an overwhelming majority of global investors declared that the Russian stock market was simply “uninvestable,” according to Bloomberg.

That’s a seismic shift for global investors, since trillions of dollars in assets are benchmarked to these indexes. And as always, there are winners and losers as a result of such a disruption.


The biggest losers are global investors who got stuck with Russian stocks in their portfolios that they could not sell. Norway’s $1.3 trillion sovereign wealth fund, for example, witnessed the value of its Russian stock holdings plunge more than 90%.

Asset managers looking to unload these stocks were basically trapped with no way to sell, since trading in them had been suspended.

The big winners, on the other hand, are other emerging market nations that picked up the slack after Russia’s equity allocation fell to zero in the emerging market indexes.

About 2.3% of the MSCI EM Index was previously indexed to Russian stocks. That may not sound like much, but the MSCI Emerging Markets ETF (EEM) alone has about $29 billion in assets.

So this one ETF was forced to reallocate nearly $700 million of investor capital.

Now multiply that by all the other mutual funds, ETFs, and other assets tracking emerging markets, and it adds up to big money. In fact, the combined market cap of all emerging stock markets is $32.5 trillion!

One big beneficiary could be India. That nation is the third-largest component of the MSCI EM Index, weighing in at 12.3% of the index. By some estimates, upwards of $600 million in capital could move into Indian stocks, according to Edelweiss Alternative Research.

Another interesting fact about emerging markets is that many of these nations are resource-rich. So if you’re bullish on commodities long-term, as I am, most emerging markets stand to benefit more from higher commodity prices than developed markets like the U.S. and Europe.

And if you are an index fund investor who would like greater exposure to inflation-protected sectors and stocks, then the MSCI EM Index is a better investment choice than the S&P 500 Index.


The MSCI EM Index has 16.7% of its total assets invested across the energy, materials, and real estate sectors. That is nearly twice the allocation to these sectors that you will find in the SPDR S&P 500 ETF (SPY). 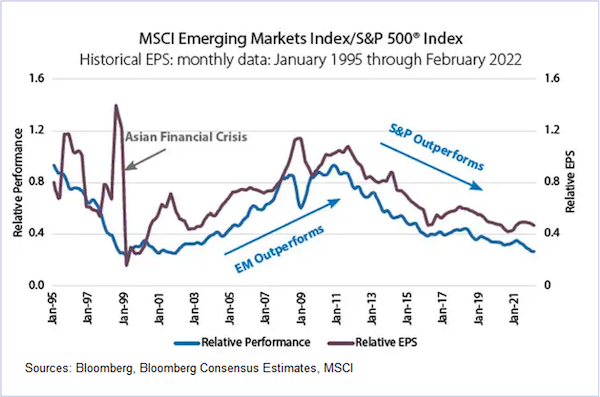 Plus, as you can see in the chart above, emerging markets have underperformed the S&P 500 for the past decade. As a result, EM stocks are much cheaper today than stocks in the S&P 500. And these relative performance trends tend to play out over many years, or even a decade or more.

The last time emerging markets consistently outperformed the S&P 500 for many years was during the last commodity bull market from 2000 to 2008. And right now, emerging market stocks look overdue to repeat that outperformance in the years ahead.