Everyone who knows me has repeatedly heard me describe The Walt Disney Co. (DIS) as perhaps my favorite company on the planet.

But in recent months, they’ve also heard me say that it wasn’t the right time to buy the stock.

The COVID-19 pandemic clobbered the company’s theme park business. And — like other studios — the House of Mouse saw its movie business get its ears pinned back.

But if the recent headlines are any indication, the movie business is roaring back. And that bodes well for three entertainment stocks we’re watching — including Disney.


Cashing In on a Cartoon Villain

Over the Independence Day holiday weekend, “Minions: The Rise of Gru” — released by the Illumination/Universal unit of Comcast Corp. (CMCSA) — smashed box office records and hauled in more than $125 million in its four-day debut.

That means that this flick — the fifth movie in the “Despicable Me/Minions” franchise — is already a bona fide blockbuster.

Comcast, Paramount Global (PARAA), Disney and other entertainment players are finally emerging from the pandemic graveyard. Folks are stampeding back to the theaters for the $7 popcorn, supersized drinks, and immersive surround-sound experience.

What a difference a year makes.

In 2021, there were only three movies that generated more than $200 million domestically; “The Rise of Gru” is the sixth movie to pass that threshold this year. (It’s already exceeded $400 million worldwide.)

One of the highlights of the summer blockbuster season was undoubtedly Paramount’s Memorial Day release of “Top Gun: Maverick,” which has already amassed more than $1 billion worldwide.

Blockbuster opening ticket sales aren’t just about bragging rights. Big movies like “Top Gun,” “Jurassic World Dominion,” and “The Batman” are the rising tide that lifts all boats. What I mean is, they bring success to more than just the movie studio. Record-breaking ticket sales drive theater profits — and help reward companies that trust Hollywood execs enough to tie their businesses to a film through affiliate promotions.

“The Rise of Gru” is a perfect example. It’s reported that the marketing push behind this film was a coordinated effort involving multiple companies globally — with a price tag of more than $285 million.

This is where the blockbuster playbook, perfected by Disney, comes into play.

When it’s a given that a film is a hit, Disney cuts deals to license character likenesses to other products. Those characters find their way to theme parks, so folks can “relive the magic” — and grab some souvenirs to maybe take a bit of that experience home with them.

With the Minions franchise, Comcast has embraced Disney’s blueprint. There are oceans of banana-colored stuffed Minions as far as the eye can see in any toy department right now.

Plus, you can visit a Universal Studios theme park and go totally yellow-blind from all the Minion-themed rides, such as Despicable Me Minions Mayhem — plus the shops, souvenirs, and live characters.

All this energy is bound to show up in the stock price.

Casting a critical eye toward Comcast Inc. reveals that CMCSA entered the Red Zone back on Dec. 9, 2021, after an impressive year-long climb beginning with an Early Entry Signal on Aug. 25, 2020, and extending through Sept. 2 of last year — for a gain of 45%.

The Smart Moving Average on CMCSA has been in a downtrend since the beginning of the year. But the stock is only considered a medium-risk opportunity, with a Volatility Quotient (VQ) of 21.28%.

Our timing indicators suggest that this stock will be moving out of a valley and begin rising very soon. According to CNN Business, 31 analysts reviewed CMCSA and projected a median target of $53, which would represent a gain of about 33% over the next 12 months.

Their highest estimates have CMCSA achieving a $70 target, or a potential gain of more than 75% for the same period. Consumers packing the theaters for “The Rise of Gru” over the July 4 holiday could be a contributing factor. 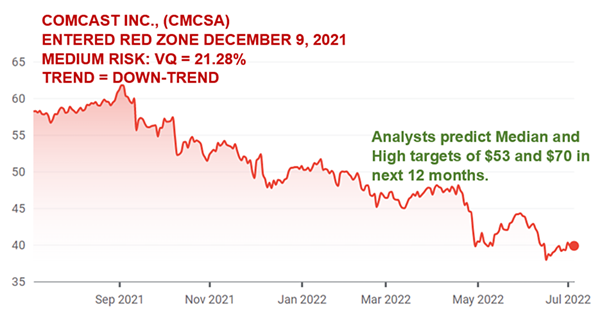 Paramount: Game for a Dogfight

Paramount’s “Top Gun: Maverick” put moviegoers in afterburner mode with its powerful debut, breaking the Memorial Day weekend box-office record by racking up $156 million in sales in the U.S. and Canadian markets alone.

However, those impressive numbers weren’t enough to pull Paramount Global (PARAA) out of the Red Zone, which it entered on March 26, 2021. This was after an Early Entry Signal delivered a peak gain of 224% on March 15, just 11 days prior.

The Smart Moving Average has been in a sideways trend for the past five months. Paramount shares are seen as highly volatile with a VQ of 41.11%.

CNN is reporting that 29 analysts offering 12-month forecasts for PARAA gave target prices that ranged from a low of $23, to a median of $33.50, to a high of $60. The median target would represent a roughly 20% gain from current price levels, while the high would translate to a gain of about 120%.

While our indicators don’t currently appear favorable for PARAA, any company that generates a billion-dollar winner is worth monitoring.

All Roads Lead to the “Happiest Place on Earth”

Disney, the company that perfected the model of movie promotion tie-ins and brand-building merchandising, is sitting pretty with “Doctor Strange in the Multiverse of Madness.”

This second film in the Doctor Strange franchise enjoyed the 11th-biggest domestic opening of all time and is the second-highest-grossing movie of the year. How’s that for bragging rights?

Yet DIS is still in the Red Zone, which it entered on Nov. 18, 2021. The stock has been trending downward for the past five months and exhibits a medium-risk VQ of 25.51%. 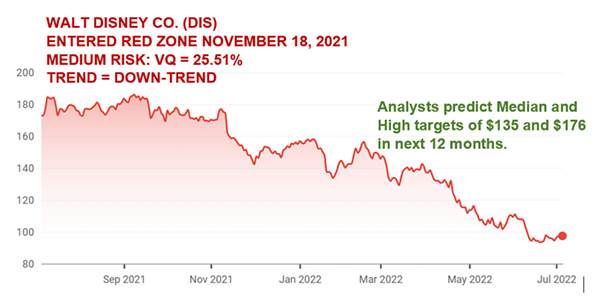 All three stocks are currently in the Red Zone, which means they should be avoided. Yet in every case, analysts have suggested that these stocks could be headed for potentially substantial gains.

You’ll want to put these stocks on a watch list, because if analysts are right, we could see dramatic moves — moves that ignite them out of the “no-buy” Red Zone and into the Green Zone.