Even smart people make dumb mistakes, especially when it comes to money…

And nothing exemplifies this better than the infamous saga of Melvin Capital, the once-successful investment firm headed up by Wall Street superstar Gabe Plotkin that’s now closing its doors for good.

On June 1, it officially stopped collecting management fees and began liquidating billions of dollars in assets to return to its members as it prepares to shutter the entire operation.

The current economic slump was the nail in the coffin for Melvin Capital – but it was the GameStop (GME) short-squeeze debacle in 2021 where everything went sideways.

See, Plotkin made the fatal mistake of betting heavily against GME – and by the end of January 2021, Melvin Capital had lost more than 50% of its value.

What Plotkin didn’t expect was a group of Redditors by the name of r/WallStreetBets pulling a short-squeeze play that would shake Wall Street to its core.

They pumped money into GME, buying the stock and pumping up the price. As the price rose, the short sellers had to cover their bets. That meant even more frenzied buying as they scrambled to cover calls — shooting the price ever higher.

Melvin Capital lost so much money (we’re talking estimates of $20 billion or more) that it required an infusion of cash just to stay afloat. Citadel stepped in and loaned $2 billion, and then Point72 Asset Management kicked in another $750 million.

In the end, Melvin Capital’s losses were just too severe.

But as tragic as the Melvin Capital-GameStop story was, its aftermath brought to light a dangerous phenomenon that investors need to be aware of to avoid falling into the same trap…

Like ghosts on Wall Street, these phantom shares don’t exist. Yet they appear to…

And in a time when inflation is eating away at hard-earned money, the lure of big returns all at once is tempting.

But here’s the thing about the GameStop debacle. Even for all the rah-rah posturing and “sticking it to the big evil hedge funds” talk, most of the investors pumping up the stock made very little money. And less sophisticated retail investors who fell for the hype got hosed big time.

The problem was they simply held on too long…

As you can see in the chart below, GME had one big run, then a lot of little runs after. But the trend clearly shows that the stock was on a downward trajectory – almost from day one – and in the end, the price of the stock fell back to earth.

Today, I want to show you how phantom shares work so you can avoid making the same mistake as those folks who lost to GameStop.

Because there’s another “meme” stock gaining attention that might be harboring ghosts – and it’s one you need to be cautious of.

Let me show you what I mean.


The Dangers of Phantom Shares, Explained

At one point, nearly 140% of GameStop’s public float (shares not held by corporate insiders) were sold short.

That means 40% of the shares sold to someone didn’t exist.

They were phantom shares.

In short selling, you anticipate the price of the stock going down, so you “borrow,” or at least “locate” in good faith, the shares to cover your transaction should the stock price rise (and you’re forced to buy stock to hand over).

This is perfectly legal.

Naked short selling, on the other hand, occurs when you move swiftly to take advantage of what you believe to be certain price declines, and your broker or banker foregoes the requirement of borrowing or locating the stock first.

In the event the stock does the unthinkable and moves against you by increasing in value, you’re on the hook for the difference between the price at which you agreed to sell it and the current market price.

However, sometimes, you’re unable to locate the shares you need to complete the transaction, and the buyer receives an “entitlement” instead. This is referred to as a “failure to deliver,” or FTD.

The buyer isn’t aware and may trade the entitlement just like a real stock. But it is, in fact, a phantom stock.

In the case of GameStop, evidence suggests short sellers profited off the sales of 40% more stock than actually existed… that is, before the devil came to collect.

Naked short selling is NOT legal – not since 2008.

Because a certain degree of intent has to be proven, it’s difficult to police, but its effects are easy to spot. Because “failures to deliver” generate massive numbers of phantom shares in their wake.

Phantom shares push down the value of real shares by increasing the supply and therefore diluting the market. This, in turn, hamstrings the company’s ability to access money.

To put the scale of this problem into perspective, consider this: According to the Securities and Exchange Commission (SEC), in the first two weeks of July 2019, a full 914,261,864 shares valued at $17 billion failed to deliver.

How Average Investors Become the Victims

Profiting from the sale of stocks you don’t own, don’t control, can’t access, and fail to deliver to the buyer has been compared to embezzling. And as you can imagine, it’s a game almost exclusively played by Wall Street’s elite — the big banks and wealthy hedge funds.

But it’s the Main Street investors – the folks like you and me – who are “squeezed” in the end. They fall for the hype of sticking it to the big evil hedge funds and revel in their demise, all while their own accounts are being drained as the stock value plummets back from the stratosphere.

That’s often what occurs when you jump on board the bandwagon of meme stocks supported by subreddit groups and the like with the hopes of a quick score.

If you go in without an exit strategy, you’ll likely get burned.

The Next GameStop Is Queued Up for a Fall

There’s another stock that’s undergoing the activist investor short squeeze… and if you’re not careful, you could be taken in.

Check out how these two charts line up:

The chart on the left should be familiar — it’s of GME — while the one on the right is of AMC Entertainment Holdings (AMC), the movie theater chain.

You’ll notice some eerie similarities. They both begin with an impressive, dramatic run-up in price, then immediately start a downward trek to the present.

This trend is actually more pronounced in the AMC chart.

Below is another view of the two stocks that tracks their trajectories over the course of a year. Notice that even though their price points are different, they still follow a similar path, to the point of coalescing at the beginning of 2022. 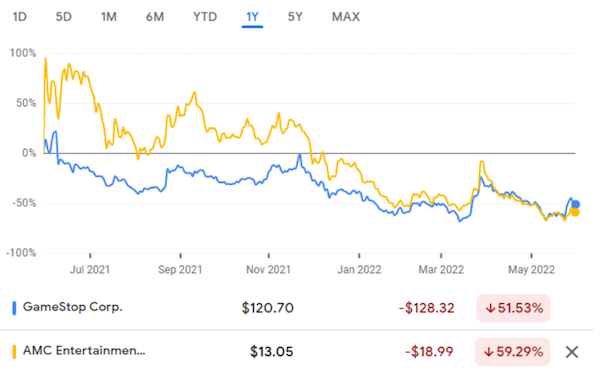 Source: Google Finance
AMC has its own Reddit following acting to hype up the stock. They call themselves the AMC Apes, and their “official” AMC stock subreddit r/AMCstock has over 468,000 members. But before you buy into their hype, you’ll be interested to know there are nearly 2.8 million phantom shares already associated with this stock.

It’s a good bet that the same mistakes made by everyday investors in GME are about to be made again with AMC.

So let’s look at AMC through the lens of TradeSmith’s algorithms.


AMC: Is It Worth the Risk?

Just three months after entering the Green Zone, due to outside market forces that had nothing to do with the stock’s inherent value, it soared nearly 500% to $62.55 by mid-June.

But what goes up must come down — especially if it is artificially pumped up.

Before the first round of high fives could be completed, just one month later, on July 14, 2021, the stock lost nearly half of its inflated value. Since then, it’s been on a bumpy ride down toward its current price point.

At the end of last year, AMC exited the Green Zone and entered the Yellow Zone, where it currently resides in a sideways trend.

The cinema stock has lost 55% since the beginning of 2022 and displays a sky-high risk, with a Volatility Quotient (VQ) of 95%. That number is rather surprising for something other than a risky crypto venture or a speculative mining, tech, or pharmaceutical stock.

Between our proprietary TradeSmith tools and the lessons learned from GameStop, everything is pointing to this being a stock to avoid rather than a diamond in the rough.

3 Diamonds in the Rough

Three Reasons to Ignore the Drumbeat of Doom

Investing Assumptions Separate You From Your Hard-Earned Money