No matter the economic conditions, the retail industry has always found a way to make sure it’s still selling products and getting paid.

After the Great Depression, cash-strapped shoppers could use layaway, where the buyer would pay in installments and receive the item after paying off the total balance.

In addition to not having to fork over a bunch of cash all at once, customers didn’t have to worry about the item being out of stock, as their initial deposit ensured that it would be set aside for them.

Decades later, credit cards became the preferred instrument for making purchases without parting with all of your money up front, although some charge large interest fees.

But times are changing yet again, with buy now, pay later (BNPL) services exploding in popularity.

BNPL combines the ideas of layaway and credit cards into a potentially more appealing alternative. Unlike with layaway, a customer who uses a buy now, pay later plan doesn’t have to pay for the item in full to take it home; they only need to make the initial deposit.

Generally, if paid off within a short time frame, BNPL plans don’t charge any fees or additional interest payments like credit cards do. Instead of having to pay off the item in a month, customers can pay in installments spread out across a few months.

According to Adobe Analytics, from Nov. 19 through Nov. 25, BNPL orders jumped 78%, and revenue from BNPL spiked 81%.

While most popular with the Gen Z crowd, BNPL is projected to see a rise in use from millennials, Gen X, and baby boomers as well. 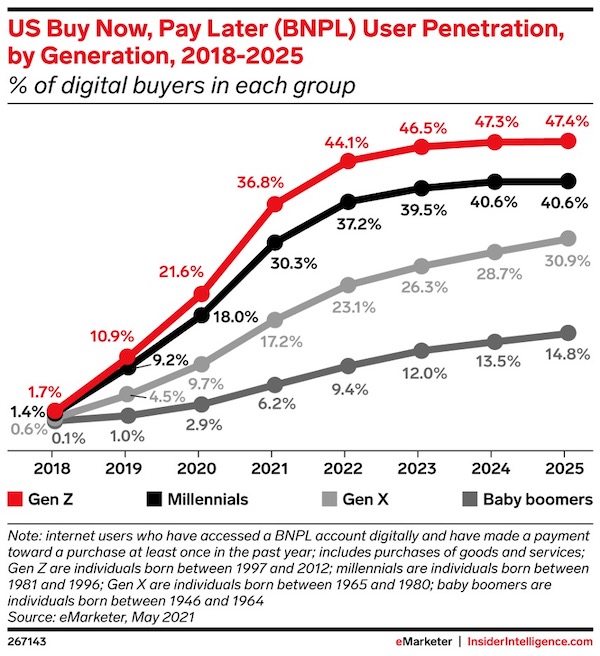 It’s clearly increasing in popularity, and it’s expected to be an industry worth $3.98 trillion by 2030.

And at TradeSmith, we recognize that as an investable clue.

Today, we’ll look at the investable BNPL options out there, run them through our tools and systems, and see how they come out on the other side.

In spring 2023, Apple Inc. (AAPL) will roll out its own BNPL service, Apple Pay Later, in a partnership with Goldman Sachs Group Inc. (GS).

Apple Pay Later will allow users to split purchases into four equal payments due every two weeks, with the first payment due at the time of the sale. Purchases are rumored to be capped at $1,000, and shoppers won’t be charged interest. 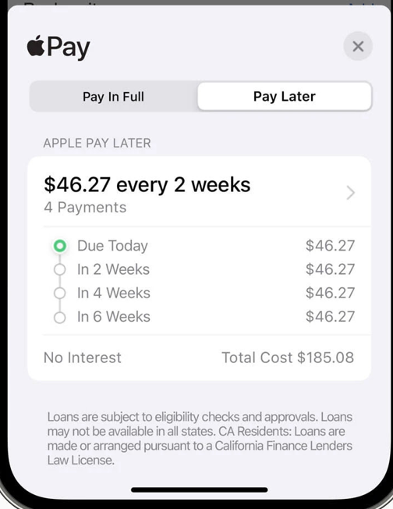 Source: PhoneArena.com
It was projected in 2019 that Apple could earn up to $1 billion in annual revenue from its Apple Card in three to five years. This new offering in the Apple financial universe could add on to that total.

While that’s just a drop in the bucket compared to the $394 billion in revenue Apple earned in its 2021 fiscal year, we still wanted to keep you informed with Apple’s push into BNPL.

AAPL is currently in our Yellow Zone, has a medium-risk Volatility Quotient of 28.36%, and has “Negative” Insider Buying sentiment.

Insider Buying is a new TradeSmith indicator that measures how much company execs are buying and selling their own stock. It’s a handy tool for measuring their confidence in the company — and for forecasting the stock’s performance.

Insiders have sold $82.3 million worth of Apple stock in Q4, a 248% increase from the previous quarter.

But Apple is far from being the only BNPL player on the block. Let’s see how other popular providers of the service compare.

Sezzle Inc. (SEZNL) – Minneapolis-based Sezzle provides shoppers the benefit of paying for their purchases in four equal, interest-free installments over a six-week period. It’s accepted by mega-retailer Target Corp. (TGT) and over 47,000 other merchants.

Splitit Ltd. (STTTF) – Splitit is a BNPL platform connecting card networks, merchants, and consumers by offering “installments as a service.” It was recognized as the 114th fastest-growing company in North America by the Deloitte Technology Fast 500. It also serves as Shopify’s BNPL provider of choice.

The BNPL industry is expected to be worth $3.9 trillion in less than eight years, but our tools and systems are saying it may still be too early to set yourself up for this opportunity.

Apple serves as a more stable and established company in the space, but its revenue from BNPL services may be miniscule compared to its overall revenue from other services and products.

The other companies we listed in the space are in either the Yellow or Red Zone, and our VQ says they’re about as risky as you can get when making an investment.

In addition, the Consumer Financial Protection Bureau opened an inquiry into BNPL lenders in January, wanting them to report loans to credit-rating agencies so that lenders can have a more accurate picture of how much debt an individual has accrued.

For the time being, this may be an increasingly popular way to pay for items, but it appears too early and too risky to be an investor in the space.