Energy was the best-performing sector last year, up 53.3%.

That pushed energy prices, including the price of crude oil, which briefly traded in negative territory in 2020, to some of their highest levels in years.

I don’t expect that to change anytime soon.

Across the board, commodity prices are surging, whether for lumber or steel, coal or gas.

Even our TradeSmith Finance sector health indicators put energy as the best-looking sector, only slightly behind financials.

However, not all commodities are created equal.

And there’s one in particular that has a ton of runway: coal.

You might be wondering why this fossil fuel has any value when so many of us are pushing toward a renewable-energy future.

Yes, that is true. But it won’t happen overnight.

In the meantime, there’s plenty of money to be made. I’ll explain why and then show you a stock that directly benefits from this thesis.

Solar panels are great except at night, which is when electricity demand is highest.

Wind turbines are awesome except when the air is still.

In our quest to deliver clean energy around the world, we still lack a key component of the equation: energy storage.

Yes, Tesla (TSLA) is building its new battery farms. But they aren’t commercially available or viable yet.

Hydroelectric dams are extremely efficient but only work in certain geographies.

Power generated by wind, solar, and geothermal is a “use it or lose it” proposition. It isn’t feasible to generate enough renewable energy to feed our consumption needs.

Even nuclear power requires backups, since we can’t easily scale nuclear output up and down.

Instead, we rely on fossil fuel energy that can be throttled up or down to fill in the gaps.

This is something that few people realize and understand.

There are also the non-energy products we create from fossil fuels, such as petroleum, that make our everyday lives easier.

Despite its bad rap, coal is the cheapest fossil fuel per million British thermal units (Btu, a measure of energy) out there.

Source: Statista
IAccording to the U.S. Energy Information Administration, in 2020, 9.3% of U.S. electricity came from coal. While coal as a percentage of total energy consumption in the U.S. is expected to decline, total coal consumption is actually expected to increase.

And that’s a global trend.

Source: IEA
While it may be obvious, it’s worthwhile to point out the incredible amount of infrastructure already in place to mine and use coal.

That may seem like a bit of a cop-out. But when you compare the costs of two energy sources, and one requires capital investment while the other is practically turnkey, it makes a huge economic difference.

Digging a Bit Deeper into Coal

People forget there are two types of coal out there, thermal and metallurgical.

Thermal coal is used for power generation. This is dirtier coal that produces carbon emissions.

Metallurgical coal is used for steelmaking and is a vital ingredient for making different types of metals. And that particular usage isn’t likely to be replaced by renewable energy even if the power grid goes 100% green.

My point in showing you all this is to say that despite incredible amounts of investment and growth in renewable energy, we aren’t leaving coal anytime soon.

That’s what creates the profit potential in the interim.


Where I See Opportunity

These days, there aren’t too many coal companies left in the markets.

However, that doesn’t mean there aren’t opportunities out there.

While coal prices have pulled back off their fall 2021 highs, the price per ton is still more than 50% higher than it was in 2020. 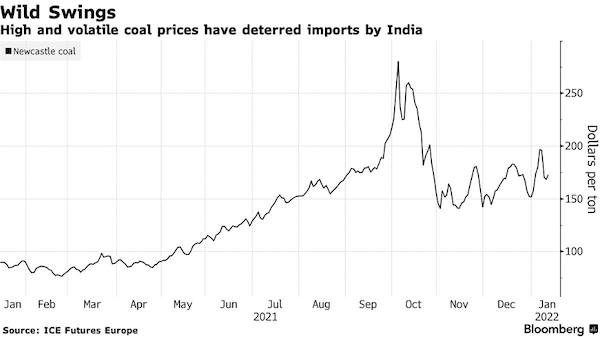 And by low, I mean REALLY low.

Source: EIA
It’s been 40 years since inventory has been this low.

And when I look around the world, with a potential coal export ban from Indonesia to China cutting coal mining capacity, I see plenty of reasons for prices to stay elevated.

So when I dug through TradeSmith Finance for an investment, one name climbed to the top: Arch Resources (ARCH).

One of the largest coal companies in the U.S., Arch operates nine mines in the major coal basins of the country.

Yes, metallurgical coal is that much more expensive.

Essentially, if the company earned the same amount of cash for the next four years, it could buy back all its stock.

But if that wasn’t enough, the momentum indicators from TradeSmith Finance look pretty sweet.

Since our entry alert back in December 2020, the stock has soared more than 131%. Yet it still has a nice uptrend and has been in the Green Zone for more than nine months.

Now, you may not want to jump in up here near the highs, and I wouldn’t blame you.

But do yourself a favor. If you agree with my thesis, which isn’t about to change anytime soon, then pop Arch Resources onto your watchlist and keep an eye on it.

Coal isn’t the only fossil fuel commodity underappreciated by markets. We’ve seen oil prices surge dramatically in the past year.

But how much further can they go? Let me know your thoughts. While I can’t respond to every email, I do read them all.