No one is onboarding folks to the world of cryptocurrencies better than Coinbase Global Inc. (COIN).

A May survey conducted by The Ascent found that Coinbase was the most commonly used exchange by Americans to buy and sell cryptocurrencies, with 56% of respondents saying they had used Coinbase in 2022.

And no other exchange came close.

Only 27% of respondents said they had used Binance, the next biggest competitor. Coinbase has become the go-to “on-ramp” for crypto investors because it’s based in the U.S., offers a user-friendly experience complete with educational resources, and has a relatively large list of coins available to trade.

Of course, there’s no hiding that this has been a rough year for crypto investors, as the price of Bitcoin (BTC) has dropped nearly 60% and interest has faded in the new asset class.

But even though the crypto market is young, there is still a well of data that can serve as a guide.


Coinbase says there have been four major cycles since 2009, with the rise and fall of the price of BTC during these cycles lasting up to four years. The green lines in the chart below represent when the price reached a peak, and the red lines represent a trough. The BTC price declined from that peak by 94% in Cycle 1, 85% in Cycle 2, 84% in Cycle 3, and 74% in Cycle 4 so far. 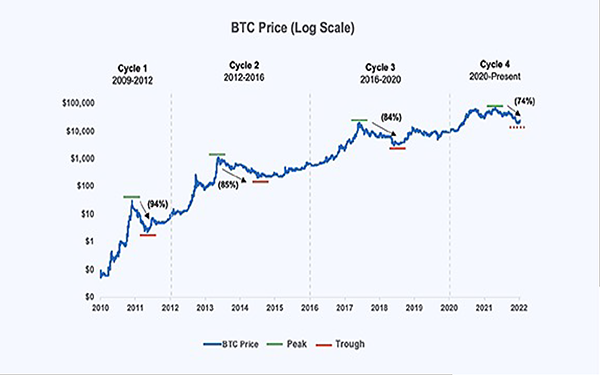 “During these down markets, we remain focused on building great products, while we typically see more casual competitors step back. Each crypto cycle has landed higher than the previous one, due to innovations built during the down turns,” the company said in its shareholder letter.

The company is working on boosting the value of its service now so that when the market does come roaring back, it can attract more new users and offer services that keep current members happy while increasing the amount of investing and trading they want to do on the platform.

Also, on Aug. 4, Coinbase announced a partnership with BlackRock Inc. (BLK), which is the largest asset manager in the world with more than $10 trillion under management. The partnership will allow Blackrock clients access to bitcoin trading services.

It’s just another validation for cryptos to be considered assets when the largest asset manager in the world offers crypto trading services to its clients.

And my friend and co-founder of LikeFolio, Andy Swan, recently shared data on consumer mentions of purchasing and/or investing in cryptocurrencies, as well as data on people talking about downloading the Coinbase app, depositing money on Coinbase, and buying cryptocurrencies through the Coinbase platform.


With Coinbase set to release earnings on Nov. 3 after the market closes, I want to make sure you hear what Andy has to say.