Whether you realize it or not, you’re about to live through one of the most consequential moments in the history of cryptocurrency…

Something that’s creating huge, potentially life-changing opportunities for those who have the right person to guide them through it…

Something known as “The Merge.”

The Merge is the culmination of eight-plus years of research and development coming to fruition for the world’s second-largest cryptocurrency, Ethereum (ETH).

It’s an upgrade that will ignite a shake-up in the crypto market and elevate Ethereum to the best risk-reward investment of 2022.

And with just days left before The Merge, you’re now faced with a choice. You can act on this opportunity now and set yourself up for potentially life-changing rewards, or you can play it safe — let this opportunity slip by, do nothing, and risk a lifetime of regret.

You might be thinking to yourself that crypto is “dead” or just a “fad.” Believe me, I’ve heard it before.


Welcome to The Merge

At this very moment, all around the world, there are warehouses full of computers working overtime, expending massive amounts of energy, with the sole purpose of mining ETH.

A single transaction drains enough energy to power the average U.S. household for a week.

Over the course of 365 days, we’re talking enough energy to power the entire country of Chile… And enough to cause major blackouts in Kazakhstan earlier this year after an influx of cryptocurrency mining operations overloaded the country’s power grid.

But that changes this week with The Merge.

In practical terms, The Merge is an upgrade that will replace Ethereum’s out-of-control, energy-consuming mining operation with a more efficient system that spreads the network load across the millions of individuals who hold ETH.

The important thing to understand here is that this one momentous move will slash Ethereum’s energy consumption by 99.95% virtually overnight.

And investors are ecstatic.

Just google “ethereum merge” and check out the custom countdown clock Google’s own engineers built into its search results: 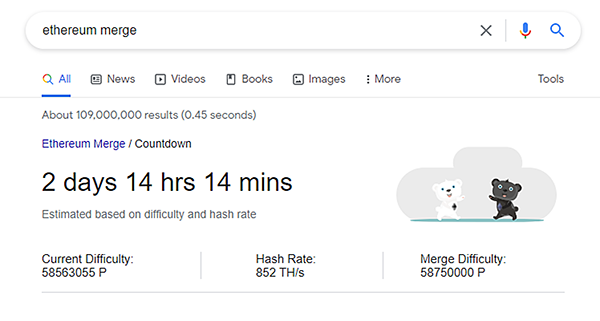 Even with the overall market trending down, excitement leading up to The Merge has pushed the price of ETH up 60%-plus over the last 60 days. Compare that to Bitcoin’s 12% gain over the same period. And those gains are a drop in the bucket compared to what’s ahead.

Because there’s something else set to drive the price of Ethereum beyond anything we’ve seen to this day — a slow-burn catalyst that’s been brewing in the background for several years that The Merge will ignite into a full-blown flame.

It comes down to simple supply and demand.

See, one thing that differentiates a cryptocurrency like Ethereum from other traditional currencies like the U.S. dollar is how tokens are supplied.

Rather than issuing new tokens whenever they’re needed, cryptos like Bitcoin and Ethereum have built-in mechanisms that control the supply and maintain their value.

Capping the supply increases demand, which has in turn proven to be a massive price catalyst for Bitcoin. After the 2016 halving, the price of Bitcoin soared all the way from $647 to $19,800 in 526 days.

Take a look at how each of these halving events has historically led to a new peak within about 1.5 years:

Impressive, right? And that’s nothing compared to what we could see with The Merge, which will have a much more dramatic effect on the supply than any of those Bitcoin halvings.

Post-Merge, the number of new ETH entering circulation will be reduced by 90%. We’re talking about a supply shock equivalent to three Bitcoin halvings at once — a “triple-halving” that could send ETH to a new all-time high over the next couple of years.

That makes Ethereum look like one heck of a bargain at its current price of $1,750.

And time is running out…


The Clock Is Ticking

After a successful dry run in August, The Merge is on track for some time between today and Sept. 15.

58750000000000000000000 is the total terminal difficulty (TTD) threshold Ethereum’s network needs to reach to trigger The Merge. It represents the last mined ETH that will ever be validated and added to the blockchain. 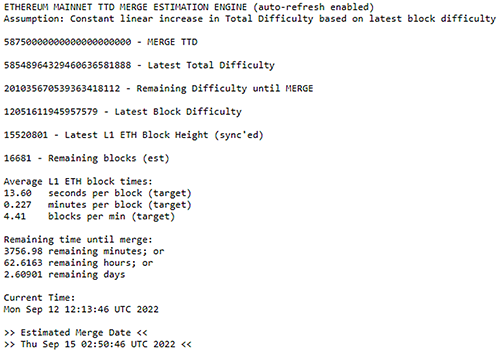 That long number means the clock is ticking — and you have a decision to make.

It’s a no-brainer for me. With such an obvious runway in front of Ethereum, there’s quite simply never been a better time to own ETH.

I’d even recommend buying Ethereum over Bitcoin for those of you who are new to crypto investing. That’s how much I believe in the opportunity.

My colleague, TradeSmith CEO Keith Kaplan, recently highlighted Coinbase Global Inc. (COIN) as an investment opportunity for folks who are “crypto curious.” And Coinbase is actually a great way for first-time crypto investors to buy ETH. You can download the Coinbase app on your phone and set up an account in a matter of minutes.

Beyond that, ETH is available on just about every other major crypto exchange — Binance or Gemini — the choice is yours.

Just make sure you don’t miss out on this incredible opportunity, or you’ll surely regret it in a few years’ time.