2022 is off to a terrible start for stocks. I warned TradeSmith Daily readers back in mid-January that “as January goes, so goes the rest of the year.”

And true to form, stocks have been going consistently lower since. Typically, January is one of the best months of the year to be invested in stocks. Since 1980, when the S&P 500 Index is up in January, stocks end the year higher 84% of the time. But when January is down, watch out.

When the first month of the year posts positive gains, as it usually does, the S&P goes on to robust average full-year gains of 15.5%.

But when stocks decline in January, as they did this year with the S&P down 5.3%, the index goes on to post much weaker average gains of only 3.3% for the entire year.

Then February picked up right where January left off, with more stock losses. The S&P 500 dropped another 3.1% last month. And the tech-heavy Nasdaq 100 Index was hit even harder to start the year, falling more than 12% throughout January and February.


The relentless selling in Nasdaq stocks dropped the index into the Red Zone, according to our TradeSmith market health indicators. It joins the Russell 2000 Index of small caps in that dubious distinction. Plus, the S&P 500 Index itself has slipped into the Yellow Zone, meaning move with caution. It sits more than halfway to its Health Indicator Stop Loss.

More than 50% of individual Nasdaq 100 stocks are also stopped out and in the Red Zone, while just over 25% of Nasdaq stocks are in the Green Zone and still on a buy signal.

This means you will want to avoid Nasdaq-listed stocks right now. And if you own any in your portfolio, you may want to check their current health status using our tools and consider selling any that fall into the Red Zone.

It’s clear the stock market is not a pretty picture right now. But bullish investors got a lift late last week when stocks staged a strong rebound. Will it last, or are we likely to see more madness in March for the markets?

For a possible answer, we can turn to our trusted market timing cycle indicators shown below for the S&P 500. 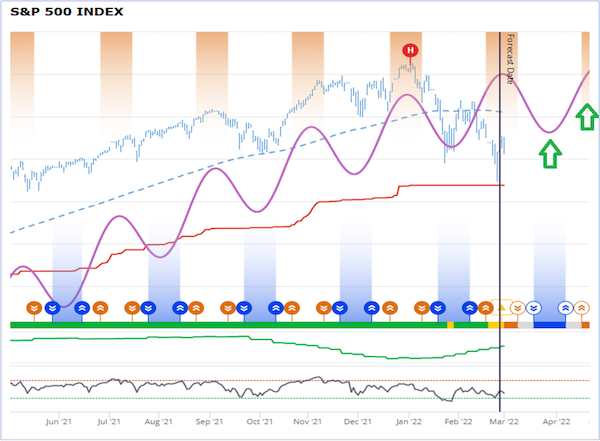 As you can see, our cycle indicator accurately predicted the big drop in January, plus the brief rebound early last month before stocks rolled over again.

Now the indicator is forecasting a near-term valley and a possible peak mid-month, which may lead to another relief rally into April. To back up this forecast with more evidence, we can turn to seasonal stock market trends.

In other words, we can look at how stocks have responded in the past under similar circumstances to what we’ve seen in January and February.

In turns out that it’s rare historically for stocks to decline in both January and February, according to analysts at DataTrek research. A back-to-back drawdown for the S&P in the first two months of the year has happened only nine times in the last 40 years.

So what typically happens next in March? Turns out, the answer is bullish.

Since 1980, the S&P 500 has been up two-thirds of the time in March following back-to-back declines in January and February. Excluding the pandemic-induced decline in early 2020, stocks posted gains of 3.6% in March on average during those years.


So typically stocks do recover some of their January and February losses during the month of March.

Whether or not the bottom is in for stocks, relief rallies take place all the time. That’s true even when stocks may have more downside in the months ahead.

If you are considering selling some stocks, particularly those that have fallen into the Red Zone, a possible rally this month could give you a good opportunity to do so.

If you are more bullish and looking to add new positions after the recent decline, now might be a good time to do that as well. TradeSmith members can easily screen for new buy opportunities in a variety of ways. A good checklist to follow might include:

Yesterday, I ran a quick screener using the factors above on S&P 500 stocks and came up with plenty of stocks that fit the bill. Many top stocks ranked by Health were from the Consumer Staples and Utilities sectors. But there were also several stocks that made the cut in the Energy and Financials sectors.

You should err on the side of caution right now, but you can see there are always some buying opportunities to be found, even in down-trending markets. And our TradeSmith tools can help identify them.