With the school year ending and summer kicking off on June 21, the talk around Team TradeSmith has already zeroed in on how folks are going to spend their hot-weather months.

And there are a flurry of options.

In just under an hour from our Baltimore headquarters, you can travel to Annapolis (Maryland’s state capital) and visit the U.S. Naval Academy, or take chartered tours around the scenic Chesapeake Bay.

Travel a bit more than an hour and you can be in Jefferson, Maryland, and get in touch with nature by hiking an alluring slice of the Appalachian Trail.

Drive a little more than three hours and you’ll experience the sandy beaches and Atlantic breezes of Ocean City, Maryland.

Good stuff, to be sure.

And I heard a lot about staffers’ summer plans during a major strategy session we held at our corporate offices in downtown Baltimore on Friday.

Maybe it’s the bearish tenor of the market (or perhaps it’s just that, as an entrepreneur, this is how I’m wired to see things). But as I listened to some of these vacation plans, I realized I was viewing them through a risk/reward lens — the same way I analyze investments.

The more popular the destination, the more you’re going to pay.

And the less prepared you are, the more painful the failures can be.

Head out onto one of those Chesapeake Bay cruises and forget to bring a hat, sunglasses, or sunblock, and you’ll end up with a nasty sunburn and a sun-glare migraine.

Strike out on the Appalachian Trail and forget to wear hiking boots and protective clothing, and you could end up with poison ivy and a wrenched or broken ankle.

Hit the beaches of Ocean City and swim out too far or ignore lifeguard warnings of an undertow, and you risk getting swept away.

When it comes to failing to plan, there are very real parallels between vacationing and investing and trading.

Particularly in a market as bearish as the one we’re seeing right now, lack of preparation can lead to financial headaches, fractured portfolios — or having your wealth swept away entirely.

We don’t want that to happen to you.

So I’ve identified three dangers to watch for to keep yourself safe.


Danger No. 1: Not Being Prepared for Prolonged Volatility

In Monday’s TradeSmith Daily, I explained how even though volatility was at historically high levels, traders weren’t expecting it to drop anytime soon and that we need to get comfortable with the idea that volatility is with us for the foreseeable future.

To reiterate an important point from Monday, markets will eventually find a bottom.

Most of the time, that coincides with capitulation in stocks, the VIX, and the VVIX.

That’s when everything makes a high-volume reversal, as shown in the chart below. 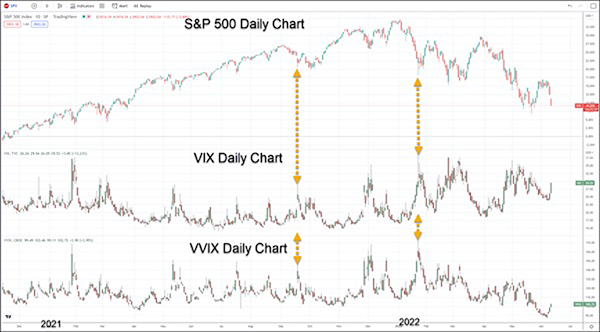 Source: TradingView
The yellow arrows highlight two times this occurred, but you can see it on many other occasions as well. In order for markets to find a bottom, we will likely need to see option demand on the VIX itself spike.

However, most folks are tempted in playing guessing games, trying to wing it until volatility slows and things become more stable, and that can lead to poor decisions and being underprepared.

Circling back to what was said earlier, we as traders and investors need to accept the idea that volatility could be here for the foreseeable future — and avoid making moves in the hope (or wish) that this whipsawing lessens.

Danger No. 2: Acting as if Oil Prices Will Keep Climbing Forever

Speaking of risky behavior, it appears as though traders expect oil to go up forever.

That seems pretty unlikely given the Federal Reserve’s current stance. In the early 1980s, the Fed hiked interest rates to extreme levels in an effort to break inflation largely driven by oil prices.

Oil prices can, and likely will, trend higher in the short term. But as anyone who has invested over the last decade will tell you, you don’t fight the Fed.

So how do I know that traders are unabashedly bullish on oil?

By looking at the CBOE Crude Oil Volatility Index (OVX).

The OVX estimates the expected 30-day volatility of crude oil.

And as you’ll see below, while it’s elevated, it’s not near extreme levels. 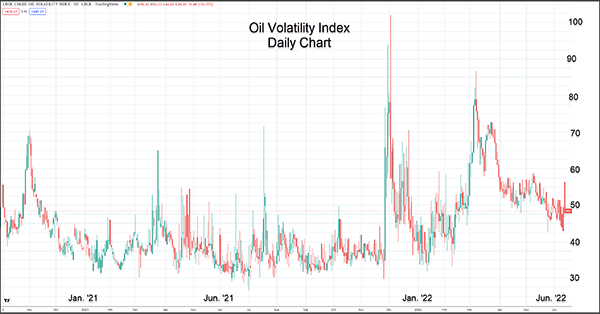 Source: TradingView
If you look at December 2021, you’ll see how oil volatility spiked past 100. That’s a signal of traders buying protection against a drop in oil.

Right now, there is none of that. The reading isn’t historically low, but it isn’t that high, either.

Again, this tells me that markets carry more risk than meets the eye.

The war in Ukraine could end overnight, sending oil plummeting, and all those traders with long oil positions would get annihilated.

I expect speculators will try to push oil through its highs one last time to squeeze everyone betting against oil, then exit their long positions.

That’s when the oil volatility index should spike. Otherwise, we could be in for oil that costs more than gold.

ETFs like the United States Oil ETF (USO) might go up in the short term, but be careful. Once oil volatility starts to jump, that is the signal to get ready to cut and run.


Danger No. 3: Relying on Big Tech to Save You

Many investors believe that hiding in stocks like Apple Inc. (AAPL) and Amazon.com Inc. (AMZN) will save them right now.

I guess I can’t fault their thinking.

After all, over the last decade, with any decline in tech stocks, most people could “buy the dip” and end up making money.

That’s a dangerous assumption to make right now. Investors can’t rely on throwing their money at Big Tech and expect to be saved.

In this environment, investors and traders must be careful about where we are sending our hard-earned dollars.

My friend and colleague Senior Analyst Mike Burnick calls growth companies “Pay Me Later Stocks.” But current market conditions say we need to be in “Pay Me Now Stocks.”

You can’t leave your cash invested in “maybe-we’ll-eventually-turn-a-profit” companies.

You need to invest in real businesses — those that have real sales and profits, that have cash hoards and generate real free cash flow (FCF). These are the companies that can “pay you now” with boosted dividends, stock buybacks, and quicker share bouncebacks when the market recovers.

These companies should also have a protective “economic moat” — including “secret sauce” core competencies or stalwart brand names — that will enable them to survive the lean times and flourish when the bullish ones return.

No Need to Panic

Don’t interpret today’s missive as a referendum on gloom and doom. Far from it.

There are trades to be made during bear-market rallies — though those must be executed with caution.

And sell-offs create bargains — especially with “forever stocks,” or cash-flow leaders that are becoming almost too good to pass up.

In fact, when our tools start sending out Green Zone “Buy” signals, there’s one stock in particular that Mike Burnick believes could be the “buy of a lifetime.”