The Federal Open Market Committee meeting last week was widely anticipated by investors. Markets were craving more clarity about the Fed’s plans to raise interest rates and reduce the size of its balance sheet.

They didn’t get it.

The Fed didn’t actually DO anything last week. It wasn’t expected to. It’s what the Fed didn’t say that triggered the downside move in stocks.

Powell made it clear that the Fed’s priority is to bring down inflation. How the committee plans to do it and how long that may take is still a big mystery, leaving investors in the dark. Powell only insisted the Fed needs to be “nimble” with its policy, which doesn’t tell investors much.

What we do know is the Fed is likely to start hiking rates as soon as its next meeting in March. And the Fed plans to start reducing its balance sheet of nearly $9 trillion worth of Treasury and mortgage-backed securities sometime after rates start to rise.


The curveball was the Fed’s lack of clarity about the potential size, timing, and duration of interest rate hikes. Also, there were no details from the Fed about how fast or slow it plans to shrink its balance sheet.

That means a $9 trillion impact on financial markets is lurking somewhere in the shadows. These lingering unknowns are a big reason why stock and bond markets have been roiled recently. 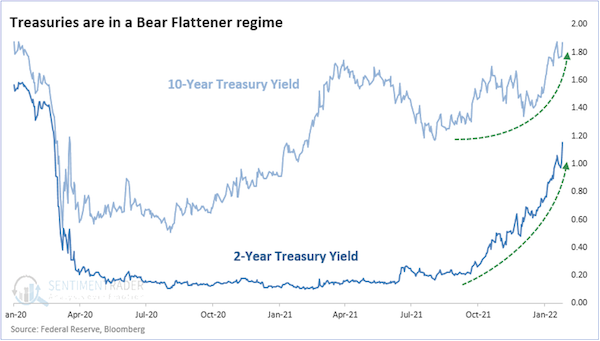 In the chart above, you can see that yields on both 10-year U.S. Treasuries and 2-year Treasury notes have moved substantially higher. The trouble is, yields on the 2s have moved up much more than on the 10s. In Wall Street speak this is called a bearish flattening yield curve.

It simply means that the yield spread, or the difference between 2s and 10s, has narrowed, or flattened, by a lot and quickly. That is typically seen as a negative for the economy and stock market.

That’s because down on Main Street, where real people save and borrow, money is getting more expensive for consumers and businesses.

Plus, the Fed is planning to make money even more expensive in the months ahead. And we don’t know how soon or how much more expensive.

So should investors worry that Fed interest rate hikes could send stock prices even lower? Not really, if history is a reliable guide.


This isn’t the first time the Fed will have launched a series of interest rate hikes. And it won’t be the last. But if you take a closer look at how stocks performed during previous rate hike cycles, it shows much more good news for stocks than bad.

In fact, since 1950 there have been 12 other Fed rate hike cycles, as shown in the chart below. And in the past, stocks posted average yearly gains of 9.4% even as interest rates rose. 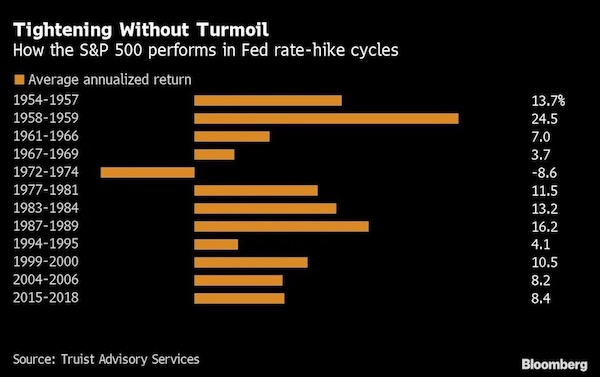 The only big exception was during the early 1970s when inflation was becoming a problem. From 1972 to 1974, the Fed tightened rates quickly to combat inflation. And stocks dropped 8.6% per year in that period.

But all of the other rate hike cycles over the past 70 years saw stocks continue to move higher. Some gains were much bigger than others, but stocks generally shook off higher interest rates and kept rising.

Historically, the stock market does tend to dip in the first few months after the Fed starts to raise interest rates.

That dip can last a bit longer and be deeper if the Fed moves aggressively in hiking interest rates. On the other hand, if the Fed moves more slowly to increase rates, stocks tend to bounce back sooner and perform much better over the next year or so.

The Fed hasn’t tipped its hand just yet about when and how much it plans to raise rates. But as this plays out in the months ahead, keep a watchful eye on how soon, how often, and how much they hike rates for clues about how stocks should react.