If the Federal Reserve can fight inflation by raising interest rates, that 12-pack of soda you’re now paying $7 for should drop back to $4 as prices for the raw materials to make those cans get cheaper. I emphasized “should” for a reason, which I’ll explain in just a minute.

When you buy a Coke, you’re getting it in an aluminum can (ignore plastic for now).

Think about the components that go into it:

As a commodity, aluminum is priced on the open exchange.

This chart shows the price of aluminum climbing from below $1 per pound in 2020 to almost $2 per pound by early 2022. 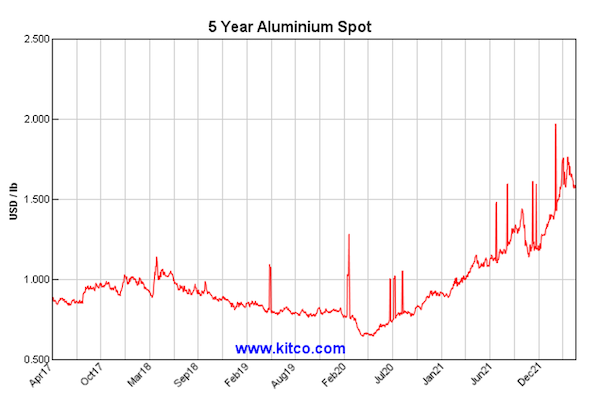 Source: Kitco.com
Along with most other input costs, aluminum prices forced Coca-Cola (KO) to raise prices for consumers.


Looking ahead, we know that the Federal Reserve and other central banks plan on raising rates until inflation comes under control.

Historically, this leads to a recession, where demand falls below supply.

That lowers the prices of commodities.

Here’s where things get interesting.

Let’s say aluminum prices decline and it’s less expensive for Coca-Cola to make a can of soda.

Coca-Cola could lower its prices, passing the cut in aluminum costs on to consumers like it passed the increase in aluminum prices, but is there an incentive to do so?

Think about it. Most people don’t change their soda-drinking habits based on the price of Coke or Pepsi. This makes demand relatively inelastic, meaning it doesn’t change with the price.

So while companies like Alcoa Corp. (AA) and other commodity producers see their profits decline, I expect margins to actually increase for some consumer goods and consumer discretionary companies — such as Coca-Cola, PepsiCo (PEP), Home Depot (HD), and Kraft Heinz (KHC) — because there isn’t an incentive to lower prices.

If the majority of people are now accustomed to paying $6 to $7 for a 12-pack of soda and are willing to do so, why would Coca-Cola ask for less money?

In order to pull off a successful trade based on this thesis, we need to have a few things happen.

First, the economy needs to go into a recession.

TradeSmith Finance can help us identify when this has happened through our market health indicators on broad market indexes such as the S&P 500 and Nasdaq 100.

Second, the price of commodities needs to decline. You can look at the price of crude oil, or the price of ETFs such as XLE for the energy sector, XOP for oil and gas drilling, or DBA for agriculture.

Declines in the beneficiaries of oil and other commodities should precipitate a drop in input costs.

Third, and most importantly, we need to set up a watchlist of stocks like Coca-Cola where lower commodity costs pad the bottom line and demand is relatively elastic.

You can think about basic consumer goods and food products. I’d list finished construction product companies as well. Even if housing demand declines, which it will, we still have an enormous backlog of commercial and public works projects left to fill.

Many of you know that I’m a big fan of options.

And because of implied volatility, options are a great way to act on this investing idea.

For those who aren’t familiar with the concept, implied volatility measures the demand for options.

Strategies like cash-secured puts and put credit spreads are great ways to take advantage of the higher-than-usual option prices. Plus, when implied volatility declines, it benefits your positions.

We also want to make sure to use timing indicators to help us pick the most advantageous moments to enter trades and reduce our downside risk. That’s where a combination of our TradeSmith Finance chart analysis tools and options trading strategies can create powerful trades.

I want to know what you think about my thesis. Email me and let me know how you expect inflation to play out for companies like Coca-Cola and Home Depot.

While I can’t respond to everyone individually, I promise to read every email.

To Help Fight Off Inflation, This BUD’s for You

Contrarian Investing Made Easy (1 Tool to Use)