Early Thursday, news broke that Russia had launched an attack against neighboring Ukraine. U.S. stock futures sold off hard premarket. Investors were skittish already with the S&P 500 down more than 10% to start 2022.

Technology stocks especially have been in the crosshairs for sellers due to the threat of rising interest rates. This is reflected by the tech-heavy Nasdaq 100 Index falling an even steeper 17% year-to-date.

In fact, TradeSmith members know that the Nasdaq 100 Index (NDX) closed below its Health Indicator Stop Loss and entered the Red Zone last week. This happened even before Thursday’s wild ride for markets.

Plus, the NDX Health Distribution indicator shows that more than 40% of the component stocks within the index were already in the Red Zone. So, Wednesday evening after market close, the downtrend triggered our proprietary Bearseye signal.

And that set the stage for what happened when news of war broke out.


It was no surprise that futures prices showed that stocks were set to fall hard right from the opening bell Thursday, but then something strange happened.

Both the S&P 500 and Nasdaq gapped down about 3% at the open; stocks hit their low point during the first half hour of trading. And it was all upside from there.

The good news is that Thursday’s price action was a rare and spectacular reversal of fortune to the upside for stocks. It could mark at least a temporary bottom for the market. The bad news is that such large reversals often happen during larger stock market declines. 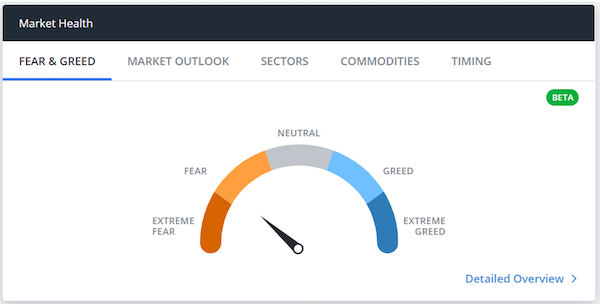 You can see in our Fear & Greed indicator above that investor sentiment is very fearful right now, on the border of extreme fear. Such readings in the past have signaled a bottom for the stock market.

So, if we are at or near a market bottom right now, it could be a great opportunity to buy stocks for a potential rebound. This leads me to a unique TradeSmith tool we developed after years of testing and analysis: Kinetic VQ.

The Kinetic VQ is based on our proprietary Volatility Quotient (VQ) indicator, which measures the normal volatility that any stock or exchange-traded fund (ETF) has over a one- to three-year period.

In developing our Kinetic VQ indicator, we followed the physics concept of kinetic energy. Kinetic energy is the energy present in every moving object. It is built up because of the movement of the object.

Think of a roller coaster. Specifically, the thrilling (or terrifying) moment as the coaster reaches a peak. It has zero kinetic energy for just a split second when it hits the top. But when it goes into free fall coming down the other side of the track, the increase in the speed of the coaster builds a tremendous amount of kinetic energy.

It’s the same for stocks. As they decline, kinetic energy builds up. When they bottom and start to rise again, that built-up kinetic energy can help fuel a powerful rebound in the stock price.

When a stock’s current VQ is well above its normal historical VQ and the stock moves into a fresh uptrend, it acts as additional energy — just like the roller coaster as it soars upward again.

That energy can propel a stock price much higher as the VQ returns to its normal levels; that’s why we call it Kinetic VQ.

The indicator works like this: For a stock to generate its own kinetic energy (Kinetic VQ), it needs four key factors.

When we tested our Kinetic VQ indicator, we looked at the history of 936 stocks going back to 1991. Overall, there were 829 stocks that met the Kinetic VQ factors.

Below, you can see the results, using our proprietary TradeSmith health alerts as our exit strategy. The average gain per trade — including both winning and losing trades — was 47.5%. 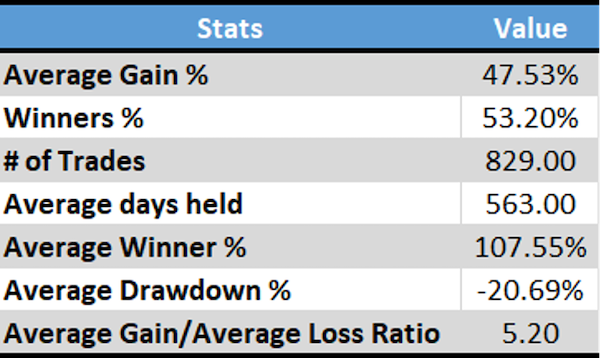 Even better, the average winner gained more than 107% over an average holding period of 563 trading days — just over two years of holding the stock.


TradeSmith members can access our Screener tool under the “Opportunities” tab on TradeSmith Finance. You can search for stocks that meet our Kinetic VQ formula to find potential rebound opportunities. Plus, you can sort the list of stocks by other factors of your choosing, including market capitalization, dividend yield, price-to-earnings (P/E) ratio, and sector.

This can be an especially powerful tool after a market decline and once stocks start to turn back to the upside, as they appeared to do last Thursday.

Right after the market’s dramatic turn at the end of last week, I ran the Kinetic VQ filter, sorting by market cap to find the big, high-volume stocks that could be poised for a big rebound.

The list showed me several blue chips that have pulled back in price but may be poised for a big rebound if stocks are indeed at or near a bottom.

The list includes several energy stocks like Exxon Mobil (XOM) and Chevron (CVX). Several defensive health care stocks also made the cut, including Eli Lilly (LLY) and Walgreens (WBA). The list of Kinetic VQ stocks is a great starting point for more research to see if some would be a good fit in your own portfolio.

Also, keep in mind that stocks with a strong Kinetic VQ have higher-than-average volatility. So you might want to think carefully about building an entire portfolio based on this strategy alone — because these stocks may be more volatile than we would normally expect.

In an oversold stock market like we have right now, you can use our Ideas by TradeSmith Kinetic VQ screener, coupled with healthy stocks that are in the Green Zone, to find potential trades that could be ready for a substantial rebound higher in price.