With any job, there are benefits you can value with a specific dollar amount.

Your salary, for one…

But there are other benefits that you can’t so easily assign a dollar value to because they’re intangible, and maybe even priceless.


In my job as CEO of TradeSmith – a role that involves a lot of traveling, networking, and speaking at major investing events – one of those “priceless” benefits is the array of investing experts I get to rub shoulders with.

I’m talking about cutting-edge thinkers, advanced system developers, and investment pros that hedge funds and other big institutions come to for advice.

He almost has too many accolades to mention, but know that this guy was made a partner at Cantor Fitzgerald at just 26 years old and would go on to create a three-tiered tracking system that sniffs out the multibillion-dollar transactions he spent 12 years of his life executing for the one-percenters – the richest of the rich.

And he doesn’t have to wait months after holding reports are filed to see what is going on because his “smart system” detects those moves in real-time – and uses those insights to ID the best moneymaking opportunities at that moment.

I’ve always been driven to understand what makes things work, and that natural curiosity extends to the people I meet and the influences that propelled them to success.

With Jason Bodner, one of those important influences was a specific investment book that he believes every investor should read.

Darvas fled from Hungary in 1943 when he was just 23 and formed a dancing team with his half-sister that performed across Europe and the United States. During his off hours – when he wasn’t dancing – Darvas spent as much as eight hours at a time reading about investing and how to make money from the stock market.

He would go on to develop a trading system – one that’s now known as the Darvas Box – that made him more than $2 million in 18 months.

I don’t want to give too much away, but Darvas believed that his method revealed signs of legal insider trading before a company publicly released favorable (and stock-price-igniting) news.


Knowing Jason and the system he has set up to spot unusual investing activity – especially when “Big Money” is flowing in and out of stocks – I instantly understood how this book helped shape his market beliefs and helped make him the investing success he’s become today.

A quick Google search under the “Shopping” tab, and you’ll see that this book is widely available. 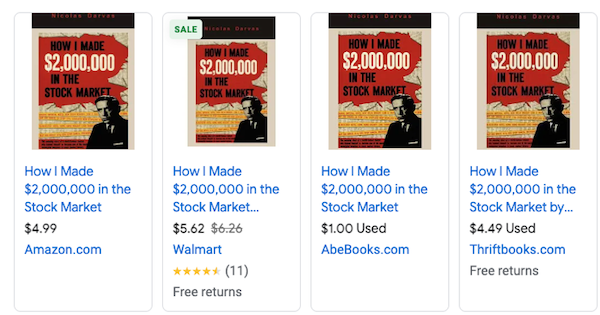 So, if you’re looking for that next book on your reading list, I would put this at the top. It has been one of the biggest influences on one of the smartest guys in finance.

After all, in spite of a sticker price as low as $4.99, it’s clear the real value of this book is incalculable.