Warren Buffett is now the world’s fifth-wealthiest person thanks to his investing skills, but he has another talent that is overlooked: making complex topics simple to understand.

One of the ways he does this is through storytelling and metaphors.

For example, in his 1997 annual Berkshire Hathaway Inc. (BRK.A) letter to shareholders, Buffett shared Hall of Fame slugger Ted Williams’ approach to batting and how it related to the investing philosophy for Berkshire Hathaway.


“In his book ‘The Science of Hitting,’ Ted explains that he carved the strike zone into 77 cells, each the size of a baseball. Swinging only at balls in his ‘best’ cell, he knew, would allow him to bat .400; reaching for balls in his ‘worst’ spot, the low outside corner of the strike zone, would reduce him to .230. In other words, waiting for the fat pitch would mean a trip to the Hall of Fame; swinging indiscriminately would mean a ticket to the minors.”
This is a perfect example of how, now more than ever, we as investors and traders need to swing at the best pitches and not indiscriminately swing at every ball that crosses our plate.

Earlier this week, I shared stocks to avoid that, in Buffett’s terms, would mean a trip to the minors.

Today, we are looking at three “fat pitch” stocks that can send us to the Hall of Fame.

Exxon Mobil is what’s known as an integrated oil and gas company.

That means it does exploration and production (upstream), transportation (midstream), and refinement and marketing (downstream).

Since each part of the oil and gas supply chain profits and suffers from different external influences, an integrated company spreads that risk through a diversified business model.

Plus, this diversification makes the company stronger overall.

With a rich history of quality performance, Exxon Mobil isn’t one of those companies that’s likely to double overnight. Yet it’s a blue-chip value stalwart that pays a healthy dividend.

The balance sheet’s eye-popping $47.7 billion in debt can be a bit jarring. However, there are several things to keep in mind.

First, as an oil and gas company, Exxon Mobil operates a large amount of capital equipment, which is valued at $216.55 billion, according to the balance sheet.

Taken together, the company generates huge amounts of cash that have grown with the rising price of oil and natural gas.

Now, it’s possible that higher rates could crimp demand for energy, driving down the price of crude sharply. So this is one company whose technicals I definitely want to pay attention to. 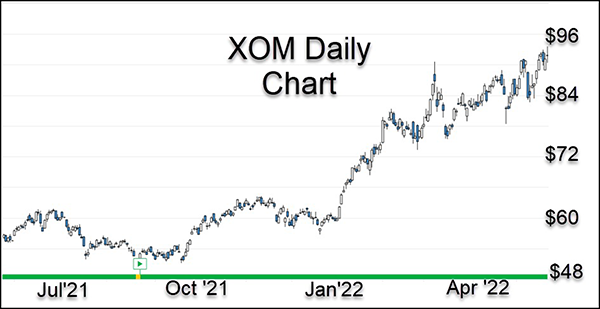 As the daily price chart for the stock illustrates, the bullish uptrend is still intact.

And at the bottom, you’ll notice that our Health Indicator currently puts the shares in the Green Zone.

The Bottom Line: Even if commodity prices pull back significantly, Exxon Mobil provides a stable business that generates oodles of cash. The company pays a healthy dividend and isn’t as volatile as some others in the energy space.

Semiconductors are in short supply.

But that hasn’t stopped the industry from taking it on the chin during the recent pullback.

Year-to-date, the VanEck Semiconductor ETF (SMH) is down more than 25%.

Yet, despite many other stocks in the sector trading in the Red Zone, Micron Technologies has managed to hold up in the Yellow Zone.

Micron occupies the computer memory category of the semiconductor segment, with its two main products DRAM and NAND.

Without getting heavily into the technical details, this type of memory helps computer systems store and access information quickly.

Like Exxon Mobil, Micron dishes out heavy amounts of cash.

In the last 12 months, operating cash flow hit a whopping $15 billion, and free cash flow came in at a lower but still respectable $4.86 billion.

The company carries very little debt with $7.67 billion, and with billions of dollars in physical capital (things like equipment) that the company uses to run its business, I’d say liabilities aren’t much of a concern.

This puts the company in a perfect position to invest in growth and facilities sorely needed to expand capacity and reduce reliance on overseas supply chains.

The Bottom Line: Demand for DRAM and NAND memory is expected to remain high for years. Despite current supply chain challenges, Micron has managed to achieve incredible margins and generate huge amounts of cash. With little debt, the company is in a prime position to reinvest in itself to both grow capacity and put it closer to customers.

You would think that financial stocks would perform better in a higher-rate environment.

Yet almost half the stocks in the Financial Select Sector SPDR Fund (XLF) trade in the Red Zone, with few in the Green Zone.

However, once markets begin to look past a possible recession, financials are set up for one heck of a pop.

Regions Financial is the largest regional bank in the U.S. and, despite the pressure on financials, trades in the Green Zone.

This is different from some of the larger money centers like JP Morgan Chase & Co. (JPM) or Citigroup Inc. (C), which participate in capital markets and trading in addition to traditional finance.

That means that a larger proportion of Regions Financial’s business is sensitive to higher interest rates.

And since rates are expected to rise, that’s a boon for the company’s bottom line.

In the latest Q1 earnings presentation, management highlighted how rising rates would improve the company’s net interest margin (the money it makes on deposits). 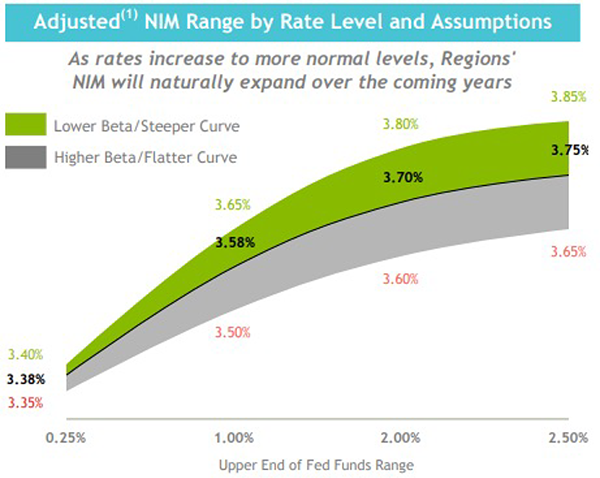 Source: Q1 Corporate Presentation
Now, there are risks out there for Regions Financial, such as fewer people taking out mortgages in an overheated housing market.

But what I like about this company is how it continues to grow deposits, which in turn grow loans and profits. For the first three months of the year, Regions Financial anticipated that $5 billion to $10 billion of nonoperational corporate deposits would leave its balance sheet; the expectation was that companies would try to find better returns on their money.

Instead, the average deposits for the bank climbed to a record $138.7 billion.

Additionally, management does a great job of keeping quality assets on the balance sheet and bad debt to a minimum.

That’s why the company has managed a three-year annualized dividend growth of 12.22%. I expect dividend payout growth to continue along with healthy share buybacks to boost investor value over the next decade.

The Bottom Line: Despite waning demand for home mortgages, businesses are clamoring for loans to fund infrastructure, manufacturing, and agriculture projects. Plus, as interest rates climb, customers are more likely to hold their money in savings accounts at banks. This raises the deposit levels, allowing banks to issue more loans and generate more income.

All of these companies have several things in common.

Second, none of them are burned by heavy debt loads.

Lastly, all three companies have demonstrated consistent growth in the past several years despite a rocky market and economy.

I believe these are the keys for any company to survive and thrive in the coming years.