Let’s face it. Some companies are run better than others.

But there’s a problem.

Semiconductors notoriously hit boom and bust cycles. No matter which of these companies you own, those busts will drag down your returns.

That’s why you should consider pairs trading.

Investors can hedge sector or industry risk by buying one company and betting against another.

I know this probably sounds cumbersome and more work than it’s worth, but it’s relatively simple to understand and evaluate.

Today, I’m going to show you how.

With a pairs trade, you want to remove sector or industry risk. To do this, you buy one stock (go long) and sell another (go short).

Since both AMD and INTC are prone to the swings in the sales prices of microchips, both stocks should rise and fall along with these cycles.

When the boom cycle hits, both stocks will rise. However, the price appreciation you make on AMD (going long) is offset by the losses you incur on INTC (going short).

Conversely, during a bust cycle, your losses in AMD are offset by the profit you make off price drops in INTC.

Over time, you expect that AMD will either appreciate more or drop less than INTC, creating a profit off of the difference in the performance between the two.

Take a look at the comparative performance of each stock over the last decade. 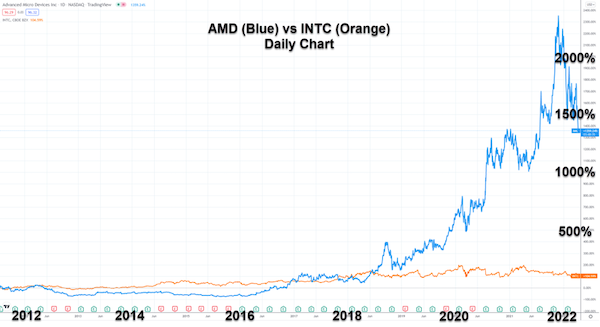 That all changed in 2017 as AMD’s business took off while delays in product launches set INTC back multiple times.

I want to look at that period in a bit more detail. 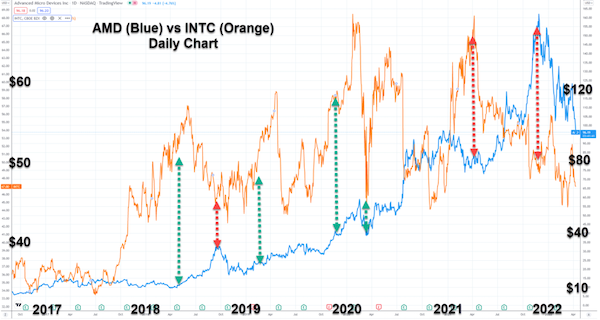 While they both tended to rise and fall together, their start and end points were very different. In 2017, INTC traded around $37, while AMD traded at $15.

This chart shows that though the cycles often impact the prices of both stocks in the same direction, AMD saw larger percentage gains overall.

Creating a pairs trade that buys AMD and sells INTC short reduces the volatility in your returns by limiting the impact of the industry cycles.

How to Create an Effective Pairs Trade

The most straightforward way to create a pairs trade is to buy one stock and short another.

However, most investors are leery of short-selling any stocks, and rightfully so.

Instead, I prefer to use options strategies.

For example, let’s say I wanted to create a pairs trade with INTC and AMD.

Then I could buy one deep-in-the-money put option for INTC, say at the $30 strike price, that expires in one year.

By going deep in the money, I ensure that the price of the option’s delta is as close to -1 as I can get.

Since each option controls 100 shares of stock, and the stock currently trades at $47, I’m effectively betting against 100 x $47 = $4,700 worth of INTC stock to match my investment in AMD.

Why am I using the $47 as opposed to the $30 strike price for this calculation? Because the price of the option will already include the $47 – $30 = $17 of intrinsic value (the value of an option if I exercised it immediately).

Now, I can also use other options strategies such as credit spreads to try to earn income through this process.

You can create pairs trades out of any two assets. However, there are a few guidelines to keep in mind:

Pairs trades also work with ETFs on broader market indexes such as the SPY for the S&P 500 and the QQQ for the Nasdaq 100.

Looking across the markets, where do you see a juicy pairs trade worth investigating?

Email me your ideas.