As I have pointed out previously in TradeSmith Daily, accelerating inflation and what the Federal Reserve will do about it are easily the biggest challenges facing the markets right now.

Yes, supply chain bottlenecks are partly to blame for inflation, but they’re only a small part of the story. Structural forces are also feeding inflation, mainly because there is just too much easy money sloshing around in the global economy right now.

And as long as producer costs are accelerating at a faster pace than consumer prices, businesses will have no choice but to pass along price increases to us, or risk plunging profit margins.

This can easily create a vicious upward price spiral that is self-reinforcing. And at this rate, it won’t be long before we revisit 1970s-style inflation numbers, i.e., 12% to 13%. This is a sea change for financial markets, especially the bond market.

The last 40 years witnessed steadily falling interest rates and low inflation. But that was then. The decades to come are likely to produce the exact opposite: steadily rising yields, which means falling bond prices. That dynamic can be a huge drag on stock prices, too, as it was in the 1970s.

The main problem, as well as the solution, is the Fed.


The Fed greatly expanded its balance sheet — essentially printing money — for years through a process called quantitative easing (QE). It started in the aftermath of the housing bust and financial crisis 15 years ago. And while the economy recovered, the Fed never really stopped printing money for long. 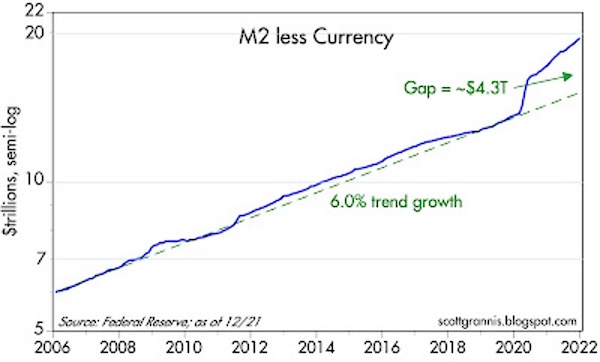 Then along came the pandemic. The Fed’s response was to push money printing into overdrive. Since 2020, the Fed injected more than $4 trillion in extra money into the financial system. The M2 money supply (a measure of the money supply that includes cash, checking deposits, savings deposits, money market securities, and other convertible deposits) is growing at a turbocharged rate, despite the pandemic, as you can see in the chart above.

The inevitable result has been soaring inflation, a problem of the Fed’s own making. The only feasible solution is to swiftly raise interest rates and, even more importantly, reduce the bloated money supply. But the Fed is hopelessly behind the curve in addressing this.

Sure, the Fed has been talking tough about inflation lately, but it hasn’t actually done anything about it yet.

The federal funds rate remains near zero today. And the Fed is still shoveling more easy money into the financial system. It continues to buy Treasury and mortgage-backed securities to the tune of tens of billions per month. That’s on top of a staggering sum of nearly $9 trillion in asset purchases already on the Fed balance sheet. 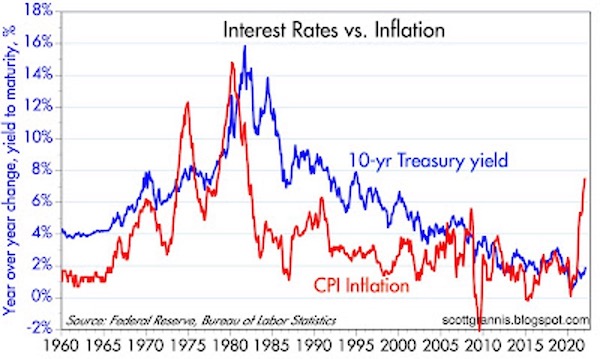 In the chart above, you can see just how far behind the inflation curve the Fed finds itself today.

Consumer prices are rising 7.5% a year, and producer prices are up 9.7%. Meanwhile, the benchmark 10-year Treasury pays just 2% in yield, which translates into a negative real yield of -5.5% per year, once you subtract inflation.

In other words, investors who hold Treasury securities are losing money every day. No wonder bond prices keep falling. And the truth is, the actual rate of inflation may be far higher than the government tally.

This inflationary climate is tailor-made for higher commodity prices, just like it was in the 1970s and early ’80s. In fact, we could be just at the start of a major new supercycle for commodities today, and for the companies that produce them.

The Goldman Sachs Commodity Index (SPGSCI) is up 16% this year, while the S&P 500 Index is down 10%. Commodity stocks, too, are outperforming the stock market. The SPDR S&P Metals & Mining ETF (XME) is up nearly 10% already this year. And I suspect mining stocks have much more upside ahead.

One excellent way to profit from this is to own mining stocks, especially precious metals miners. In fact, the last time commodities outperformed the stock market, from 2000 to 2011, the NYSE Arca Gold BUGS Index (HUI) of mining stocks soared an astonishing 1,337.5%!

And I think it’s very likely that investors will see a repeat performance of that over the next 10 years.


Gold has historically outperformed other stocks whenever the Fed starts to raise interest rates, which it most certainly will do next month. Gold stocks, which have upside leverage to gold prices, tend to significantly outperform. 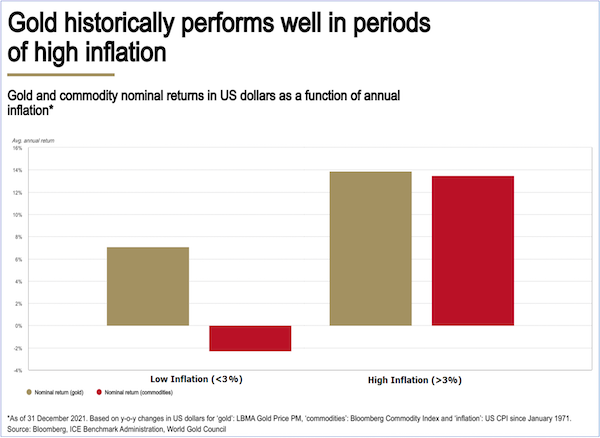 In years when inflation was above 3%, as it is now by a wide and growing margin, gold prices increased nearly 14% per year on average. That is almost double the 7% annual return for gold when inflation is below 3%.

In other words, gold is a great hedge against the twin threats of higher interest rates and inflation that investors face right now.

Gold mining stocks, meanwhile, have a proven history of outperforming gold prices. Because of their operating leverage, the miners typically rise much more in percentage terms than the price of gold itself. Higher gold prices result in much faster increases in profit margins and cash flow for the mining stocks.

After many years of declining prices, gold bottomed near $1,050 per ounce in 2015. Since then, gold jumped 80% in value through the end of 2020, as you can see above. But gold mining stocks have soared 180% higher since then, more than double the gain from gold itself.

The Fed created the inflation problem with too much easy money for too long. And the Fed has been slow to apply the only real solution, higher interest rates. This means that gold prices are likely headed even higher in the years to come as inflation becomes sticky. Gold mining stocks will almost certainly outperform to the upside, based on historical precedent.

Turn The Fed’s Rate Hike Into a Moneymaking Plan