The bull run is over for technology and growth stocks. (Later in this piece, we’ll tell you what to own instead.)

Consumer tech, software as a service, social media, cloud plays, gig economy stocks, digital payments — all of these areas and more like them have performed brilliantly over the past decade-plus.

They won’t perform brilliantly moving forward, though. They are the investment opportunities of the decade we left behind, not the one we are heading into. If you insist on buying technology and growth in the coming years, you will probably tread water at best, and it is far more likely you’ll be subjected to pain.

To understand why, we can look at Microsoft (MSFT), one of the all-time-great companies and an all-around great investment over the past nine years.

Microsoft is a world-beating technology juggernaut. It is run by a fiercely capable and strategically brilliant CEO, Satya Nadella. Its future in cloud services and many other areas looks bright. And yet, MSFT will most likely be a lousy investment in the coming years.

If you buy in today, you will almost certainly lose money on the stock in five years’ time, or languish in nominal terms and lose money after inflation.

Before we dig into why, it’s important to note that companies and industries can fall out of favor for long stretches at a time, sometimes a decade or more. This is what happened to Microsoft after its dot-com bubble peak in the late 1990s.


People forget that the dot-com era of the late 1990s was not just about internet stocks. It also led to unprecedented levels of overvaluation in more traditional blue-chip names, most prominently Microsoft (MSFT) and Coca-Cola (KO).

Generation Z arrived on the scene in 1997. If you had put Microsoft or Coca-Cola stock into a Gen Z baby’s college fund, that same kid could’ve been driving a car before they broke even.

What caused these iconic blue chips to stall for so long? Did the business suddenly go bad?

No, the trouble was crazy valuations. Both KO and MSFT saw mind-blowing valuation run-ups in the late 1990s, to the point where Bill Gates was briefly worth $100 billion in July 1999.

When companies reach extreme valuations at the peak of a cycle, they can spend years — or even whole decades — working off the excesses of that extreme.

Fighting Valuation Compression Is Like Walking into a Headwind

If you’ve ever tried to walk or jog in high winds, you know how challenging it can be.

When the wind is strong enough, you literally have to lean forward when walking against it — because if you don’t, the wind pushes you back and can even topple you over.

Big-picture cycles of valuation expansion or compression are like the direction of the wind. Sometimes they move in a favorable direction for investors — and sometimes they do the opposite.

At the time of this writing, the vast majority of high-profile technology and growth stocks have historically inflated valuations. And many of those companies, like Microsoft, are not just historically overvalued but extremely overvalued relative to normal valuations throughout history.

This is a real problem because when the macro cycle switches from valuation expansion to valuation compression, it doesn’t matter whether you are buying a good business. If the valuation multiple is in compression mode, the business can chug along and the share price can still go sideways or down, sometimes for years at a time.

The problem we’re describing here is even worse for tech and growth companies with negative earnings.

Airbnb is well positioned to thrive as a global business in the years ahead. It has a durable competitive advantage due to worldwide network effects — to truly compete with Airbnb, you would need millions of properties on multiple continents, a very hard thing to replicate — and travel trends are favorable to Airbnb relative to the traditional hotel industry.

Still, though, the company has negative earnings — it is still burning cash for the sake of growth — and trades at a price-to-sales ratio of 16.87, per Yahoo Finance.

From a historical perspective, a multiple of nearly 17 times sales is beyond extreme, especially for a company with a $100 billion valuation.

It is so extreme, in fact, that if the ABNB share price fell by half — to a multiple of roughly eight times sales — it would still be considered expensive!

In favorable periods of valuation expansion, the multiple can go almost anywhere as investors take the attitude of “Who cares what the multiple is — it’s a great company and conditions are favorable.”

But that casual disregard for valuation is a two-edged sword, because the same logic turns brutal in periods of valuation compression.

If a fast-growing company can have literally any multiple in good times — because investors don’t care — that same multiple can be slashed by 50% in tougher times and still look pricey.

If the company is an excellent business and well run by smart management (as Airbnb seems to be) then some, but not all, of the valuation compression in a tough period can be offset by actual revenue and profit gains in the underlying business.

And yet, if the nosebleed valuation shrinks at a faster rate than revenues and profits grow, the favorable earnings results might only get investors a 20% decline in the overall share price versus a 50% one.

This is why bear markets can be rough, by the way: In bear market conditions, even companies that are doing well and growing their profits can see share prices flatline or decline for years on end, because the valuation multiple is traveling in a negative direction faster than the business is moving in a positive direction.

The Tech and Growth Decade Is Over

Okay, you might ask, but why expect valuations in technology and growth stocks to go into compression mode for years on end?

Clearly, tech and growth stocks have been doing well for a long time — a solid decade or so, notwithstanding the rough waters of 2021 — so what would make such a difference now as to expect the valuation gear to be thrown into reverse?

To answer that question, it’s first important to remember that favorable conditions for technology and growth stocks are cyclical.

Three of the primary drivers that favor tech and growth stocks — and encourage valuation expansion over a period of many years — are the presence of low inflation, low interest rates, and easy credit.

Those conditions existed through most of the 2010s: Inflation was low, interest rates were low, and credit was readily available.

Now we are headed into almost the exact opposite conditions.

This cycle will last a very long time — possibly the rest of the decade. Analysts who still insist on recommending tech and growth names, meanwhile, will be burning up investors’ money.

So is there anything you can do? Is there a way to still profit from what is coming?

Yes. Look to value stocks, commodities, and energy and precious metals. These will be areas of prosperity in the years ahead. The cycle is deeply favorable for them now.


The Bond Market Is Using a Bullhorn

We are headed into a period of rising inflation and rising interest rates. Such conditions are terrible for technology and growth stocks — and excellent for traditional value stocks.

You’ve likely heard that U.S. inflation is at 40-year highs, and that Russia is turning into a pariah state due to its actions in Ukraine, which is contributing to oil prices above $100 per barrel (with oil possibly on its way to $150-$200 per barrel).

What you may not know is that global bond markets are having their worst start to a year since 1949, because bond markets fall as interest rates rise.

Global bond markets are in free-fall because interest rates are finally rising in a meaningful way.

And interest rates are likely to keep rising, over a period of multiple years, because inflation levels are now painful for the West and the major drivers of inflation — like persistent shortfalls in the supply of energy, metals, and grains — are not going away.

Value stocks and commodities tend to do well in conditions that are the polar opposite to the conditions favoring technology and growth stocks.

Those are the conditions we are headed for now — and the bond market is practically shouting this message by telegraphing a sea change in overall conditions toward rising interest rates and rising inflation pressures.

For example, check out this multi-decade channel breakout in the U.S. Treasury 10-year yield: 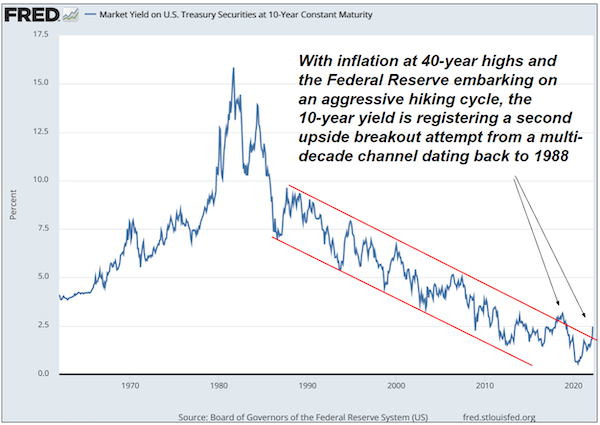 With inflation at 40-year highs and the Federal Reserve locked into a hiking cycle — it will be forced to hike aggressively no matter what, even if a bear market or recession is the result — the U.S. Treasury 10-year yield has likely seen its all-time bottom, and is now attempting a second breakout from a multi-decade bearish channel.

Then, too, the Nasdaq Composite and the Nasdaq 100 index both triggered official bear market status (a 20% or greater decline from the highs) in recent weeks.

The Nasdaq going officially bearish was no fluke. It was further indication of the major transition from the tech-and-growth-favorable conditions of the 2010s — low interest rates, low inflation, and easy credit — to a harsher environment of rising inflation, rising interest rates, and tightening monetary policy, which benefits value stocks and commodity and energy plays.

Beyond the U.S. Treasury 10-year yield, further evidence of the sea change is found in bond markets globally, which have experienced levels of early-year turmoil in 2022 not seen since the implementation of the Marshall Plan (a massive American aid effort to restore postwar Europe) in the late 1940s.

In fact, according to Bank of America strategists — and we agree with this assessment — the “third great bond bear market” is likely now underway.

That is a long time for interest rates to be rising — and for technology and growth stocks to be out in the cold. Do not “buy the dip” in such names, and do not listen to macro-blind analysts who advise you to buy.

Instead, look to energy, to industrial metals, to heavy industry and agriculture and precious metals; from a big-picture macro-cycle perspective, the upside in such areas is only just beginning.