On March 15, 2020, the Federal Reserve unleashed quantitative easing not seen since the credit crisis a decade earlier.

With the S&P 500 down 20.57% from its all-time highs less than two months before, the market took investors for one last ride on its way to finding a bottom.

Yet one indicator topped out on the Fed announcement, a full week before the market bottomed.

Known as the “fear gauge” of the markets, the VIX usually has to peak before a bottom forms in the market.

So far, that hasn’t happened.

Typically, markets bottom when selling volume climaxes and there aren’t any more sellers to be found (or at least enough to overcome the buyers) and the VIX tops out.

We don’t see that right now.

Instead, we see divergences between the two, pointing to a likelihood of more downward pressure ahead.

Here’s how I see this playing out, what to look for in a true bottom, and most importantly, what to do with this information.

The VIX and the stock market trade in opposite directions most of the time.

In fact, the 60-month correlation between the UVXY and SPY ETF (proxies for the VIX and S&P 500 movements, respectively) is -0.78.

This means that the VIX and S&P 500 have a strong negative relationship.

That’s why it’s unusual to see the two move in the same direction, especially in volatile markets.

Take a look at the daily chart below that shows the VIX on the top half and the S&P 500 on the bottom half. 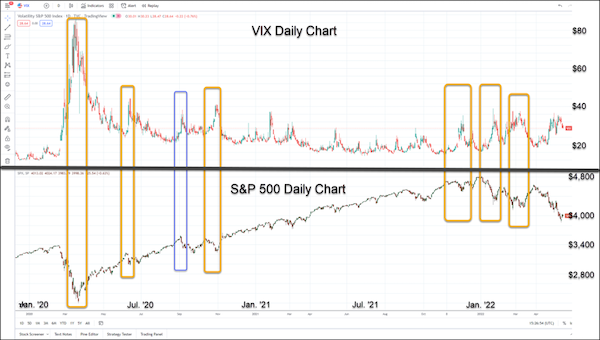 Source: TradingView
The orange boxes indicate when the VIX made a high that coincided with a low in the market.

To give a complete picture, the blue box indicates one of the times that that didn’t happen.

What this tells us is that typically, markets find a low when the VIX makes what’s called a “blow-off top,” where it runs up quickly and makes a peak before heading lower. 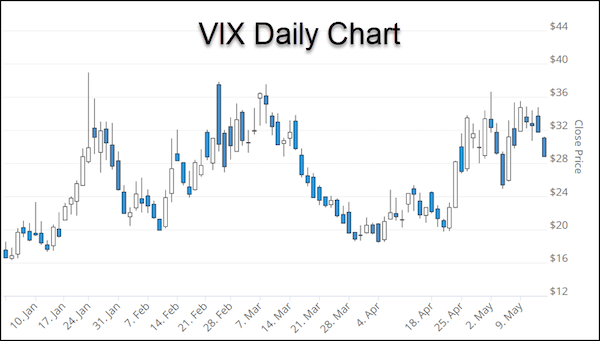 Source: TradeSmith Finance
Not only has the VIX not broken the highs from January or February of this year, but it hasn’t really peaked either.

Instead, it has floated around the highs without ever breaking them.

For a market bottom, we want to see fear driven into the market with the VIX spiking to a new high.

Otherwise, this tells me traders and investors aren’t bearish enough to form a true market bottom.

The VIX of the VIX

Another reason I say this is because of a similar scenario in the VVIX.

The VVIX is the VIX of the VIX. Essentially, it measures options demand on the VIX.

Typically, when options demand is higher, it indicates markets are nearing a top.

What’s different is the VVIX likes to trade in a pretty well-defined range, even more so than the VIX. 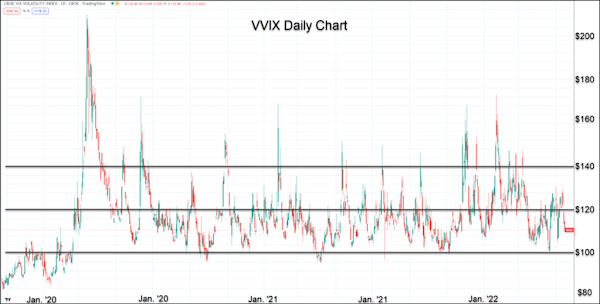 Source: TradingView
Generally, the VVIX will spike above $140 when the market is in the process of finding a low.

We saw that several times this year in January and February.

And like the VIX, when things get really dicey, as they did in March 2020, the VVIX can reach obscenely high levels.

On the flip side, when the VVIX is at or below $100, it usually coincides with a bullish market without much volatility.

Looking at this chart, I want you to note how the VVIX didn’t eclipse $140.

Like the chart of the VIX, this tells me we haven’t seen true fear in the markets, the kind of fear needed to create a bottom.


What We Can Do with This Information

First and foremost, what I laid out here is based on historical data and is what I see as likely, not guaranteed.

Markets can and do change. Just because something worked in the past doesn’t mean it will again.

Plus, black swan events can always throw things out of whack.

That said, I want to use any market rallies to start taking some profits on trades, especially those with broader market exposure like big tech.

Additionally, I can use the opportunity to sell calls against my long positions to create covered calls.

How do I know when all this changes?

For starters, I use the VIX and VVIX information listed above to identify potential market bottoms.

I’d want to see an Early Entry Signal at a minimum and preferably a solid Green Entry Signal.

That’s when I can flip from a “sell the rip” to a “buy the dip” mentality.

In the meantime, regularly update a watchlist of stocks so that when the moment arrives, you can strike with laser-like precision. What other indicators or setups have you found that reliably signal that the market has bottomed?

While I can’t respond to everyone individually, I promise to read each of your messages.

We’re Not in the Millionaire-Making Meme-Stock Days, But It’s Not All Doom and Gloom