“Never… was so much owed by so many to so few.” — Winston Churchill

Churchill spoke those famous words near the end of the Battle of Britain. He was referring to the heroic efforts of relatively “few” Royal Air Force pilots who defended England from Nazi invasion early in World War II.

For the investing world, although in an obviously different context, those words ring true for what’s about to happen in the stock market.

Because the market’s fate is in the hands — or more accurately, in the spreadsheets — of a few Wall Street analysts who have high expectations for corporate profit results.

Even though most investors today believe we are already in recession, or soon will be, Wall Street hasn’t cut its earnings estimates very much for 2022.

Well, the moment of truth comes in the next few weeks.

That’s when hundreds of companies in the S&P 500 Index will “fess up” about their sales and profit results for the quarter that just ended in June. Even more important, they will gaze into their cloudy crystal balls and offer up guidance for the second half of the year.

I can’t overemphasize that there has perhaps never been so much at stake for the direction of the stock market than what corporate America has to say in the next few weeks.

The good news is that due to the steep drop in stock prices this year, the valuation of the S&P 500 Index is looking, well, reasonable again, if not yet cheap. But it’s certainly a big improvement over the last six months. 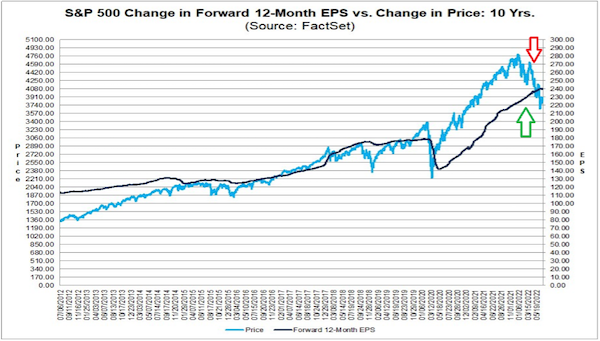 You can see above that the fall in stock prices (light blue line) happened this year while earnings estimates (dark blue line) continued to rise.

As of July 1, that means the S&P 500 was trading at a far more reasonable forward price-to-earnings (P/E) ratio of just 15.8x expected profits for the next 12 months. That’s down sharply from a P/E ratio that was north of 21x just six months ago.

That’s what is supposed to happen in a bear market. Stocks transition from expensive to cheaper… that is, as long as earnings hold up.

In fact, over the past 10 years, reported S&P 500 earnings have exceeded Wall Street estimates by 5.5% on average. Profits missed forecasts just once over the past decade — understandably, in the first quarter of 2020 during the COVID-19 shutdown.

So, let’s do some quick math, but no difficult algebra equations.

Here’s the most important information from that — if 9.6% (or something close) is the actual earnings growth rate for the S&P 500 once all is said and done, I expect that to be viewed as a very positive surprise that could send stocks higher. Investors are very worried about inflation right now and the impact it could have on corporate profits. And with “headline” inflation above 9% year-over-year (as of Wednesday), there is reason to be worried. Rising labor costs are particularly troubling for corporate America.

That’s because rising costs put profit margins under pressure. This can lead companies to miss profit estimates, which could be a source of lower profit forecasts from corporate management for the second half of the year.

And the last thing the stock market needs right now is more bad news. Lower profit forecasts could prove to be a negative surprise that sends stocks even lower.

This means Wall Street analysts will take a sharp knife to S&P 500 profit estimates for the rest of this year, which means the E in the P/E ratio drops, and most likely, so will the P as in stock prices. 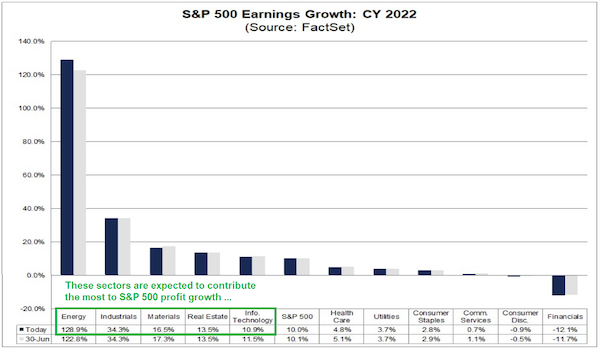 Five sectors of the S&P are expected to report double-digit growth, which would be led by energy, industrials, and materials. Energy is, in fact, the only sector where earnings estimates are still on the rise.

A double-digit growth rate for S&P profits this year would be very bullish for stocks IF these estimates hold true. The worry is that estimates may be too high — and we shall soon find out.

There is reason to believe that inflation pressures could peak in the months ahead and begin to ease, as I pointed out last week. And if that turns out to be the case, then corporate profits should hold up just fine.

But if higher inflation persists, profit margins will most likely be pressured lower along with Wall Street earnings estimates.

This is the trillion-dollar question facing investors right now, and there is a lot riding on the answer. But no matter what happens, the TradeSmith team and I are in your corner and here to show you how to not only protect your money but make more all along the way.