But these talking heads are living in a different reality.

Don’t fall into the trap of thinking that these stocks look cheap and fit the bill as value stocks.

Investors still face real headwinds that are unlikely to recede in the coming months.

So rather than rely on talking heads to make investment decisions, today we’re going to help you focus on the fundamentals — reliable indicators that will help you find the companies with the strength to withstand the current adverse conditions.

One of the things we’re looking for is stocks that pay a dividend of about 3%. With a recession looming, earning a dividend can help you put much-needed extra cash in your pocket.

We’re also looking for stocks with a healthy trading volume, low volatility, and an upward trajectory. These are all tried-and-true indicators.

With the help of our proprietary Screener tool, we’ve identified three investments that meet these criteria to a T.

These are picks you likely wouldn’t have found on your own — but that’s the beauty of using data to drive your decisions.

It’s not about emotion. It’s about the cold, hard facts that are going to make you money.

1. The Tech Giant That Lost Its Way

International Business Machines Corp. (IBM) has been an afterthought as an investment in the tech sector over the last several years. It’s the story of a tech giant that lost its way.

Just look at how the IBM stock price has performed over the last five years compared to that of Microsoft Corp. (MSFT) and Apple Inc. (AAPL). 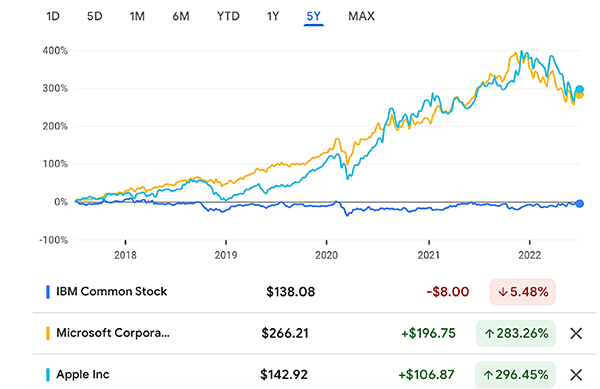 But few are paying enough attention to the company’s turnaround story: IBM has stopped trying to be all things to all people and is instead focusing its business in key areas.

IBM spun off its managed IT infrastructure services into a new publicly traded company, Kyndryl Holdings Inc. (KD), and has shifted its focus to being a top-tier service provider for hybrid cloud computing platforms. A hybrid cloud platform gives companies the option of storing their information on a public cloud, on on-premises infrastructure, and on private clouds for more sensitive information, like financial records.

This setup offers its customers flexibility for communication and collaboration while also offering more security because not all of a company’s information is stored in one location.

Turning its attention to this area of the market was a smart move for IBM. The global workforce is in the middle of a “Great Reshuffling.” After the pandemic, working from home became the new normal. About half of America’s full-time workforce reports having a job that can be done remotely, according to a recent Gallup poll. And folks aren’t ready to give that up — of those respondents, 54% of employees currently working from home would leave their job if they were asked to go back into the office. That means demand for hybrid cloud solutions like what IBM offers is only going to rise.

Twenty billion dollars is no small sum, especially considering that the hybrid cloud market brought in $56 billion in revenue in 2020. With the market expected to reach $145 billion in revenue by 2026, IBM’s sizable stake positions it for future success.

In addition to those increasing sales, IBM offers a hefty dividend yield of 4.8%.

For over 125 years, J.M. Smucker Co. (SJM) has been a staple for the American consumer.

While the company is best known for its delicious jams and jellies, it also manufactures several coffee brands as well as a robust line of pet foods, including 9Lives, Kibbles ’n Bits, Meow Mix, and Milk-Bone.

Coffee still accounts for the majority of Smucker’s annual sales, but its entrance into pet foods in 2015 (through the acquisition of Big Heart Pet Brands) has been a significant boost to the company’s bottom line. We’re talking another $3 billion in net sales – from $5.7 billion in 2015 to $7.8 billion in 2016 — and that number has remained consistent around the $8 billion mark ever since.

Like IBM, SJM is one of those steady-Eddie stocks that isn’t going to give you triple-digit percentage gains in a year, but it also won’t keep you up at night.

Historical data shows Americans tend to cut back on discretionary spending during a recession — things like cars or furniture — but food spending remains relatively unchanged.

SJM has benefited from this trend: From a technical standpoint, the monthly chart below for the stock exhibits a nice steady uptrend outside of one blow-off top in 2017.

And to top it all off, this steady stock earns you a 3% dividend.

Atlanta-based Southern Co. (SO) is one of the largest utilities in the U.S., with capacity of 46,000 megawatts, 200,000 miles of transmission and distribution lines, and more than 80,000 miles of natural gas pipeline.

If you live in Alabama, Georgia, or Mississippi, chances are you’ve heard of this utility behemoth.

While recessions reduce energy demand slightly, stocks in this sector tend to hold up well due to consistent power needs and the dividends they pay out, which are supported by heavy cash generated from operations.

Take a look at the chart below, which looks at the price (including dividends) of Southern Co. from 1990 until the present.

Most folks don’t operate on a 32-year investment horizon.

But this monthly chart does a great job of showing the effects of compound interest over time.

Consider if you had invested $10,000 back then — your original investment would be worth more than $1 million today.

Now, these are just three of the dozens of opportunities found through our TradeSmith Finance screener.

This incredible tool allows you to comb through stocks using not only basic search parameters such as P/E ratios and volume but also TradeSmith’s proprietary strategies and stock health indicators.

To learn more about the key market signals that you should be focusing on right now, check out this video from our Senior Analyst Mike Burnick.