I want to tell you about my friend J.S.

This guy invested and traded in the markets for more than a decade, and as impressive as his market and business acumen might be, my friend will tell you that he can be his own worst enemy.

One of our recent discussions centered around a $3,000 loss he incurred in 72 hours.

He had a trade he wasn’t monitoring as closely as he should have been, the trade started to get away from him, and the losses grew.

At the same time, he was in a completely unrelated trade that wasn’t working out, but he did establish a mental stop-loss for this position. Rather than cut the position when it hit his stop, he made one of the most common trading mistakes you can make and “doubled down.”

When losses get too large, it’s natural to put more money into a trade or investment with the hope that the losses will be recovered.

One bad decision led to another, compounding the problem until it hit an extreme.

Remarkably, the simplest way to solve this chaotic slide starts by admitting to our mistakes.

Every investor and trader I know — myself included — has made a mistake at some point.

Even Warren Buffett, widely considered one of the greatest investors to ever live, has made mistakes.

The good news is that the mistakes we make are actually beneficial in teaching us valuable lessons.

Through mistakes, you can more easily identify what not to do, which puts you on a faster path to finding out what you should be doing.

But if you don’t own up to your mistakes, it can cost you.

He would have still lost money in the trade, but if he recognized and admitted his trades weren’t going to work out instead of “doubling down” on them, he would have saved himself some money.

That’s why setting up a trade log or journal is invaluable.

It provides you with an unbiased look at your actions and the results.

I also find it useful to regularly check in with myself during a trade or investment to make sure that I am following a plan.

In addition, I try to cut down on mistakes by using technology.


Use Tools to Cut Down on Mistakes

Technology is our greatest weapon in the fight against mistakes.

Rather than leave it up to human error, we move the decisions and executions to an unbiased entity.

I pointed out to my friend the following trade that came out of our system on American Airlines Group Inc. (AAL), one of the stocks he traded for a loss. 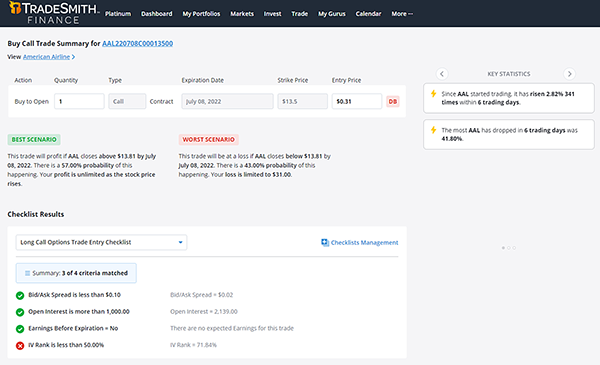 He can use this information to calculate his total risk AND the probability of profiting from the trade.

Rather than letting emotions or constant punditry pounding from financial networks sway our decisions, we can turn to platforms like TradeSmith Finance to help guide our decision-making process.

I like to point to the Bearseye signal our platform delivered right before market declines accelerated in 2020.

I made plenty of mistakes over the years myself, but each new day offers a chance to work on improving.

Accept that they happened.

Make plans to reduce them.