What investors give to the stock market, they can quickly take away.

Such are the extremes in investor money flows into — and more recently, out of — active and passive ETFs and funds that track the market indexes.

In 2021, for the first time in history, net inflows from investors into global ETFs were more than $1 trillion. The majority of that cash flowed into ETFs that track U.S. stocks.

In fact, the big three index ETF sponsors — Vanguard, BlackRock, and State Street — now control more than 75% of U.S. ETF assets. U.S. ETFs alone hold $7.2 trillion in assets at the end of last year. Add in mutual funds to ETFs, and the industry accounts for a combined $27 trillion in assets, a staggering sum.

Much of this money tracks popular U.S. stock and sector indexes. This includes the SPDR S&P 500 ETF Trust (SPY), which tracks the large-cap index of the same name, and the Invesco QQQ Trust ETF (QQQ), which tracks the tech-heavy Nasdaq 100 Index.


SPY, the oldest ETF in the industry, has well over $400 billion in total assets. And QQQ now has more than $200 billion in assets under management. But it has been a very rough start to 2022 for these ETFs.

Rising angst over surging inflation and the possibility of much higher interest rates have combined to put downward pressure on the stock indexes early this year. SPY has dropped 9.6% in value in just the first 14 trading days of 2022. And QQQ is down more than 13% so far this year.

The predictable result of the recent market weakness has been big mutual fund and ETF redemptions by skittish investors pulling their cash right back out again. 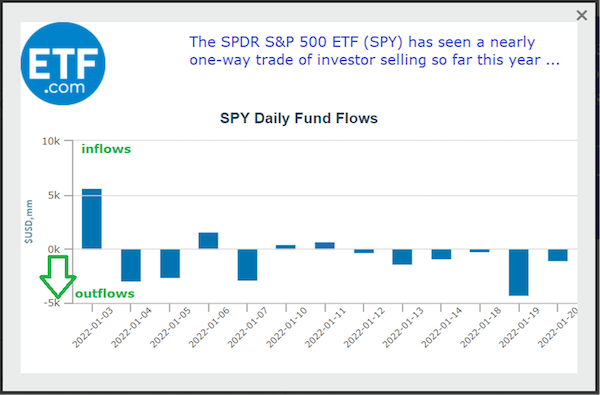 And if this dynamic gains enough momentum, it can lead to a doom loop of falling stocks triggering more redemptions leading to even lower stock prices. This is most likely going on right now, which is why stock prices have been declining constantly.

The SPY ETF, for instance, has posted just four up days so far this year. It’s fallen in value on 10 trading days so far.

Another telltale sign of massive ETF redemptions taking place right now is the fact that stocks have been especially vulnerable to selling off at the end of the day. That’s when mutual fund and ETF managers typically sell stocks to meet investor redemptions.

And this doom loop can be even more hazardous for ETFs with a narrower focus, such as sector ETFs that focus only on tracking technology or consumer stocks. In fact, both the SPDR S&P Software & Services ETF (XSW) and the SPDR Consumer Discretionary ETF (XLY) have enjoyed just two up days in the last two weeks!

The dark side of index investing in ETFs and mutual funds is that more and more cash pours in when times are good. And this forces the ETF to buy more and more of the most popular stocks at higher and higher prices.

This is the exact opposite of the old investment wisdom of buy low and sell high.

And it also leads to a potentially unhealthy concentration in just a handful of the most popular and best-performing stocks. Just 10 stocks out of the 500 that make up the SPY ETF carry nearly one-third of the value for the ETF. And only three stocks (Apple, Microsoft, and Amazon) account for 16.2% of the ETF.

Concentration risk in the QQQ ETF is even greater, with the top 10 stocks making up 52.4% of the ETF. And just five of the 102 stocks included in QQQ (Apple, Microsoft, Amazon, Meta Platforms, and Tesla) make up a whopping 37.8% of the ETF!

The more narrowly focused the ETF is, the worse the concentration problem can be.

Just ask folks that own the ARK Innovation ETF (ARKK) to see just how ugly a doom loop ETF redemptions can be.

This is a cautionary tale for ETF investors everywhere.

It’s an understatement to say 2021 hasn’t been good to ARKK investors so far. The ETF is already down 26.5% so far this year. And according to TheStreet.com, ARKK has suffered nearly $1 billion in outflows (~$882 million) over the past month alone! 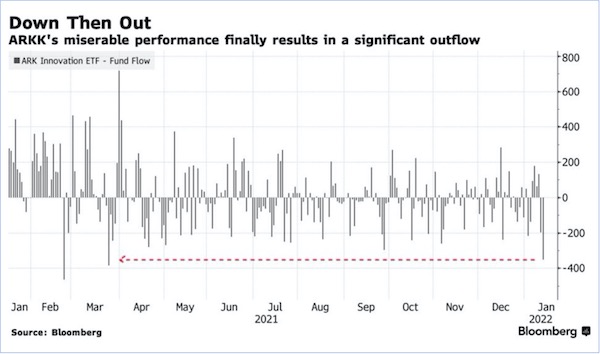 ARKK wasn’t always this unpopular with investors. In fact, up until recently, it was the darling of technology-focused investors.

Launched in 2015, ARKK dedicated itself to investing in “disruptive” technology innovator stocks. The fund finished the following year, 2016, with a two-year total return of +1.7% and just $9.1 million in assets. But then ARKK CEO and Chief Investment Officer Cathie Wood got a hot hand.

Of course, that stellar performance attracted the bulk of ARKK’s assets, pushing it to reach $6.8 billion in average assets under management in 2020. Just in time for the ETF to stumble big time.

ARKK peaked at an amazing $28 billion in assets by February 2021, but it has gone mostly downhill ever since.

The ETF finished last year with a loss of -23.6% and many unhappy shareholders, most of whom came in at or near the top and didn’t participate in much of the upside. But they received the full brunt of the downside in ARKK since the ETF peaked at nearly $160 in early 2021. Today, ARKK is trading at less than $69, down 56.6% from the peak.

Adding insult to injury, most investors in ARKK are now underwater, according to analysis by Morningstar.com.

The reported total return for a fund or ETF is often very different from what the average investor earns. The total return differs from what’s called the dollar-weighted return, or internal rate of return. This is due to the timing of cash inflows and outflows for ETF investors over time.

Because investors often buy an ETF for different reasons (too often, recent performance) and at different times (often near the peak after big gains), investors’ actual results can and often do look very different from the returns posted in an ETF fact sheet or prospectus.

The reason for this big disparity is that the majority of investor assets flowed into ARKK at precisely the wrong time.

After most of 2020’s huge 156.6% gain was already booked, investors poured $3 billion of fresh cash into the ETF in December 2020 alone. In fact, more than half of all the cash inflows for all of 2020 came into ARKK in the fourth quarter.

Talk about bad timing. ARKK had already gained 76.9% through September 2020. And while the ETF finished with a strong 35% gain in the fourth quarter when all that money was flowing in, it has been almost all downhill since then.

Morningstar analyst Amy Arnott, CFA, covers the cautionary tale of ARKK in more detail in a recent article here. And it is well worth a read, especially with the markets under selling pressure like right now.

First, know what you own and understand how diversified a fund or ETF is or isn’t. Index ETF investing can be a great, low-cost way to participate in the stock market. But not all index funds are that well diversified.

Remember, the top 10 stocks in the QQQ ETF account for more than half of its assets. So with QQQ, you’re really investing heavily in those 10 stocks. The SPY ETF has similar concentration risk, but to a lesser degree than QQQ.

Second, sector-specific ETFs, like ARKK, are even more top-heavy in just a few names making up a big part of the fund. Just three stocks (Tesla, Zoom Video, and Teladoc Health) make up 22% of the ARKK ETF, which holds a total of 152 stocks. And the top 10 stocks account for more than 55% of the ETF.

Third, never ever chase performance. History has shown time and again that the hot mutual funds or ETFs for any single year rarely repeat as top performers the next year. Many don’t even make it into the list of best-performing ETFs for many years after.

And even more dangerous, when you buy a hot ETF after stellar performance, you are basically buying high. Then too many investors are liable to sell the ETF low in frustration after it stumbles. That’s a quick ticket to the poorhouse.

Always remember, the more concentrated a fund or ETF is, the more likely it is to suffer from a doom loop of investor redemptions when performance goes bad. And trust me, you don’t want to get caught up in a selling stampede like that. Just ask any ARKK investor.