Wall Street pros refer to these as “special-situation” investments.

We view them as catalysts for some of the biggest moneymaking opportunities you’ll find.

In stocks, in bonds, in closed-end funds.

In Wall Street Journal headlines. On CNBC. Tucked deep inside that inscrutable corporate earnings statement. In an activist investor’s edgy letter to a recalcitrant CEO.

Some of these opportunities are right there in plain sight. Others take a bit of Sherlock Holmesian detective work to uncover.

That’s where TradeSmith comes in.


We’ll do the legwork for you: In this TradeSmith Daily feature – Special-Situation Central – we’ll sift through the market morass of possible situational investing plays, identify those with the most promise, and bring you the one that matters most. We’ll run these special situations through our proprietary analytics and show you how to navigate them. We’ll spotlight the ones to buy – and help you strategize how to buy them. And we’ll occasionally zero in on one to avoid, highlighting the risks and explaining why you should steer clear.

We’ll tap into our corral of investing experts – including Senior Editor Mike Burnick, myself, and others – to give you our unique take on the special-situation play we’ve brought you.

We’ll do all of that here and more. And we’ll do it for free – just one more way for us to create even more value for our followers and fans here at TradeSmith.

In this debut issue of Special-Situation Central, we’re bringing you a global media and entertainment innovator whose stock is in our Green Zone – and also hits a bunch of the other hot buttons on the TradeSmith analytics “Buy” list.

What’s more, there’s an additional kicker here – one that may make this a special-situation “coup de grâce.”

This company may be a takeover target.

This is a company whose content gets piped into a billion households each week. A number like that will make it a juicy target for companies like Netflix Inc. (NFLX), Amazon.com Inc. (AMZN), and Walt Disney Co. (DIS), which are vying to stay relevant in a global video-streaming market that’s projected to soar from $473.39 billion today to $1.69 trillion by 2029.

The opportunity to buy a content producer like the company we’re about to share is rare, and you can get in ahead of one of the well-heeled suitors I just mentioned.

So, let’s get ready to rumble…

To Be the Man, You’ve Got to Beat the Man

When Vince McMahon purchased his father’s wrestling company in 1982, Forbes said that he “transformed the World Wrestling Federation from a regional operation into a global phenomenon.”

He didn’t create pay-per-view sports events, but WWE Hall of Fame wrestler Kane said that “you can make an argument that he was the guy that perfected it.”

In 1985, the first WrestleMania took place in New York City’s Madison Square Garden, and in 1986, “WrestleMania 2” was broadcast as a pay-per-view event. The event was held simultaneously in New York, Chicago, and Los Angeles, and Roddy Piper was pitted against Mr. T in a boxing match as one of the main events. Even by wrestling standards, it was excessive, and the company decided to abandon the three-venue format.

By tweaking what worked and what didn’t with WrestleMania 2, McMahon hit his stride in 1987 with WrestleMania III. At the Pontiac Silverdome in Michigan, Aretha Franklin sang a rendition of “America the Beautiful,” Hulk Hogan body-slammed the 520-pound Andre the Giant in the main event, and the WWE generated $10 million from pay-per-view sales.

Today, WrestleMania is an economic force all its own. After WrestleMania 38 was held this past April in Arlington, Texas, Dallas Mayor Eric Johnson and Arlington Mayor Jim Ross said that the event earned the cities $206.5 million; $25.4 million alone was spent on hotels and accommodations within the region.

The WrestleMania concept helped McMahon build a unified professional wrestling brand that is known around the world; its programs can be viewed in more than 180 countries in 30 languages, and, as we mentioned before, on one billion television sets per week.

Building that brand with an incredible cast of personalities is part of the reason why World Wrestling Entertainment Inc. (WWE) is worth $5.3 billion.


As a fun side note, I got to know one of those personalities, Diamond Dallas Page.

A mutual friend introduced us because he thought we had a lot in common, so we had lunch together and realized we shared a lot of the same beliefs and principles about health and fitness.

You can see us together doing his signature gesture, the “Diamond Cutter.”

Now back to investing…

As much as he did for the company, McMahon has retired amid investigations into allegations of misconduct. There are plenty of news outlets that cover the specifics of those investigations; TradeSmith is focused on what this means for investors.

With McMahon being a driving force behind the company for so many years, the future of the company looks uncertain. Even before McMahon retired, when President Nick Khan was asked earlier in the year if the company would ever sell itself, he said that “we’re open for business.”

McMahon’s daughter, Stephanie, and Khan will run the company as co-CEOs.

While there’s no guarantee that a sale will happen, what makes this such a unique situation is that our system says WWE is a stock to own on its own merits. The kicker is that it could be an acquisition target, and because there is no other company like this, it’s a once-in-a-lifetime opportunity for another company to own it.

Netflix or Amazon or Disney could offer a premium from the current stock price that is too good for WWE to turn down. 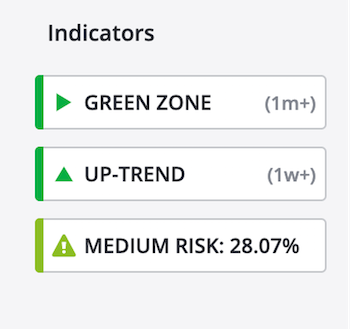 The company is in our Green Zone, the stock is in an uptrend, and it has a medium-risk score of 28.07%.

WWE still rewards its shareholders with a small dividend payout, which currently has a yield of 0.68%. In addition, it also has a moat because of its signature content and its ability to generate revenue from live wrestling events.

Before COVID-19, WWE generated $125 million in revenue from 310 events. In 2021, the company generated $58 million from 101 events. With fewer restrictions on public gatherings, the company can start putting on more shows… and generate more money.

WWE is a treasure trove of content that potential buyers such as Amazon, Disney, or Netflix could use to draw in new members.

TradeSmith Investing Recap: WWE is a potential acquisition target for companies like Netflix, Amazon, and Disney after the retirement of former CEO Vince McMahon. It pays a dividend with a yield of 0.68%, has a moat thanks to its content, is in our Green Zone, and has a medium-risk score.

Before you go, let me know what you think of this new feature. Would you like to see Special-Situation Central in TradeSmith Daily on a continual basis?

Send me your thoughts here.