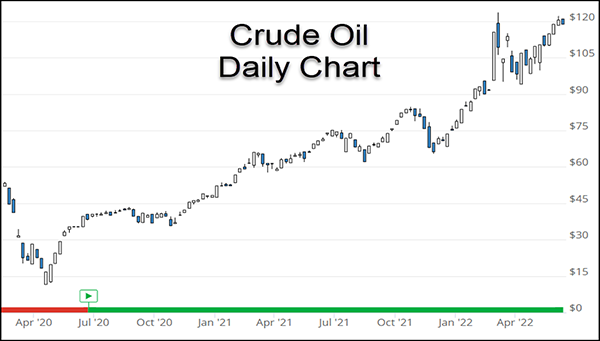 Commodities aren’t meant to get so much more expensive over such short periods of time.

As a reference point, back in the early 1980s, the Federal Reserve, led at the time by Chair Paul Volcker, jacked up interest rates by more than 15% until it broke the price of crude oil.

That slowdown spreads out to the broader economy, ultimately leading to less travel and gas consumption.

Given the Fed’s comments earlier this week, I fully expect it to stick with higher rates until oil prices and other inflationary pressures ease, and there still could be even higher oil prices in the near term.

However, the party can’t last forever, and being under-hedged when a market quickly shifts can lead to losses in the blink of an eye, so I want to give a quick synopsis of what’s going on in the oil market and what to consider before making any investments.

With summer around the corner and fewer pandemic-era travel restrictions in place, people may still be willing to pay a pretty penny at the pump to continue with their vacation plans.

But there comes a point where prices are so high that demand starts to get destroyed, and people decide to stay home so that they don’t have to pay for gas.

Think about the recession in 2008, when gas prices were around $4 per gallon.

Just look at this headline:

Across the country, the average gallon of gas now costs $5.

Again, I want to be clear that oil prices could continue to climb, and I also want to make it clear that I’m just talking about oil and not the entire energy sector.

For example, natural gas fundamentals are significantly stronger given how large Russia’s market share was.

Plus, natural gas demand is more seasonal than crude oil.

That’s why I wouldn’t just go out and bet against all oil and gas stocks, if you felt so inclined because you’re betting on prices to eventually fall.


The global supply chain has changed so dramatically that we cannot expect nor rely on streamlined deliveries.

I fully expect countries to hold higher stock levels as a buffer against supply disruptions.

With so many factors that could affect prices, I would be cautious with oil and gas stocks over the next few months.

I will be keeping an eye on things as oil prices consolidate during that time.

However, there are currently a couple of opportunities in the Green Zone that offer solid dividends and a nice trend, including Energy Transfer (ET) and Enbridge (ENB), both of which also qualified for the Best of the Billionaires and Low Risk Runners Ideas Lab strategies.

These make great long-term holdings, especially as overall energy demand is expected to climb over the next several decades.

3 Valuable Tips for Trading and Investing around Holidays

What Makes a Moat: How to Spot the Strongest Stocks on the Market

Hidden in Plain Sight: Three Dangers Investors and Traders Must Avoid at All Costs