Even with all of that, there’s still a worse-performing index.

That dubious distinction goes to the tech-heavy Nasdaq 100 Index; it tumbled 13.3% last month alone and is down 21.2% year to date. That’s firmly in bear market territory. There are plenty of things investors are worried about right now that are weighing heavily on stocks. Chief among them: accelerating inflation (now at 40-year highs) and the Federal Reserve’s mission to tighten interest rates in an attempt to get inflation under control.

Also, worries about slowing growth in Europe, China, and America abound. The U.S. economy unexpectedly contracted in the first quarter, with GDP falling 1.4% at the start of 2022.

There’s an old saying on Wall Street that “stocks climb a wall of worry.” And it seems there are plenty of bricks in that wall to worry about right now.

But that is always the case after stocks tumble for four straight months, as they have this year. The other side of the coin is that investor sentiment has reached extreme bearish levels, which is a contrarian bullish sign for stocks (more on that in just a bit).

This negative sentiment is everywhere you look today. The CBOE Volatility Index (VIX) spiked above 36 this week. This “fear gauge” has more than doubled from its January low. The equity options put/call ratio is skewed heavily toward bearish call option bets right now.

Plus, retail stock investors are running for the hills. A recent survey from the American Association of Individual Investors (AAII) showed that less than 16% of everyday investors are bullish right now. That’s even worse sentiment than at the COVID-19 stock market low in 2020.


Negative sentiment is so pervasive that it’s all the financial press seems to talk about right now.

Case in point, a recent Bloomberg article points out that “the NYSE Fang+ index, home to the big internet platform groups that were treated as the best shelter from the pandemic, has sold off so sharply that it has now lost 20% just since the beginning of April.”

Oh, how the mighty FAANGs (Facebook, Apple, Amazon, Netflix, and Google) have fallen.

The end must be near, as the Bloomberg article implies: “There has been plenty of volatility over the last two years. There always is. But this particular selloff looks more significant than those that preceded it.”

What led the market into this sea of bearish sentiment? Aside from the inflation, interest rate, and growth worries listed above, some of America’s favorite stocks are disappointing investors.

Video-streaming giant Netflix Inc. (NFLX) got the ball rolling with disappointing subscriber losses in its most recent quarterly report. Then the results from Alphabet Inc. (GOOGL) were seen by Wall Street as just OK. That was followed by a big miss at Amazon.com Inc. (AMZN).

Balancing those grim reports, however, is the fact that Apple Inc. (AAPL), Meta Platforms Inc. (FB), and Microsoft Corp. (MSFT) all surprised on the upside with their own results. But no one wants to accentuate the positives in this bearish market climate.

Bloomberg goes on to warn that the FAANG stocks have lost their former premium valuation compared to the rest of the stock market. The forward price-to-earnings ratio (P/E) for the FAANGs contracted sharply to just 22 times estimated earnings, compared with a P/E of 18 for the S&P 500 Index overall.

That is significant shrinkage in the edge these high-growth stocks have enjoyed over the rest of the market. In mid-2020, the FAANGs commanded a P/E ratio of more than 50 times expected earnings, compared with an S&P 500 P/E of just 27 times profits.

But is it really such a bad thing that some of America’s fastest-growing stocks are much more reasonably priced today?

After all, you are supposed to buy low and sell high, right?

The Nasdaq 100 Index – land of fast growth and home of the FAANGs – has certainly borne the brunt of the selling in stocks this year. That’s because fears of higher interest rates cause investors to discount future growth at a higher rate. And because these stocks are among the fastest-growing companies on the planet, they take the biggest haircut to valuation. 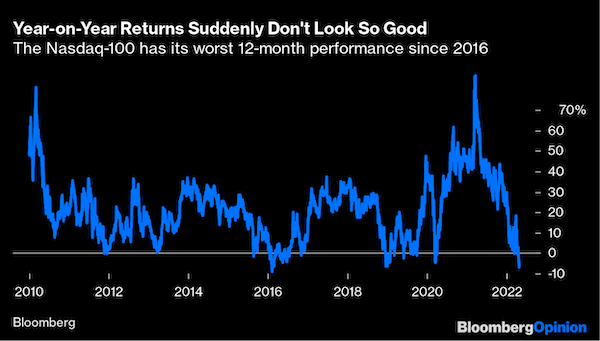 Bloomberg continues its cautionary tale by noting that all the gains for the Nasdaq 100 over the past year have vanished, as you can see in the chart above.

The tech-heavy index has lost money for investors over the past 12 months, which is a rare occurrence. In fact, it’s the worst 12-month drawdown for the index since early 2016, according to Bloomberg.

But the point is, the big drawdown is now in the rearview mirror. It’s what happens next for the Nasdaq that’s more important.

You can also see in the chart shared earlier a few other times when the Nasdaq’s annual return dipped into the red. It happened in 2011 (briefly), in late 2019, and during the COVID-19 crash in early 2020.

The key question to ask is, what did the Nasdaq 100 Index do next after those drawdowns?

The four previous sharp drawdowns in the Nasdaq 100 were followed by average gains of 51.7% just 12 months later.

Don’t get me wrong. I’m not saying that the Nasdaq and FAANG stocks can’t fall further in price from here.

It’s certainly possible. Netflix, for example, fell into the Health Indicator Red Zone back in January. And that was spot on, as the shares have dropped even more since then.

What I am saying is that some of America’s favorite, fastest-growing, most dominant stocks are on sale right now for the first time in a long while.

Valuations of the FAANG stocks, if not exactly cheap, have at least returned to reasonable levels again. And when you compare their more attractive valuations with their superior growth prospects, these quality companies offer you much better buying opportunities.

The bottom line is that after other steep drawdowns in recent years, leading Nasdaq stocks have gone on to post outstanding gains averaging more than 50% over the next year.

Perhaps that history lesson is about to repeat.