Stock and bond markets got a big boost earlier this week when San Francisco Fed President Mary Daly signaled that the Fed should consider slowing down its breakneck pace of interest rate hikes.

In a speech at the University of California Berkeley, Daly said, “The time is now to start planning for stepping down.”

That’s a clear reference that the Fed should consider slowing the pace of rate increases, which have been coming in 0.75% increments for the past several Fed meetings.

And it’s significant because it is the first time in the current rate hike cycle that ANY Fed official has publicly “blinked” about the need to raise rates. And it’s about time!

Since the Fed began hiking rates this year – long after inflation began accelerating early in 2021 – it has tried to make up for its slow start.

In just six months, the federal funds rate has gone from zero to 3%. As you can see on the chart above, that is a faster AND a steeper pace of rate hikes than at any time in modern history.


Of course, inflation is higher now than at any time in the last 40 years, so the Fed feels that its actions, although badly delayed, are justified. But the truth is, higher interest rates take time to work through the economy. And it takes longer still for inflation, a lagging indicator, to noticeably decline as a result.

But there are signs that the Fed’s rate hikes are already working to slow the economy, increase financial stress in markets, and even bring down inflation — IF you look at the right indicators.

Hat tip to professional economist turned blogger Scott Grannis for the illuminating charts above and below. The one above clearly shows that the six-month annualized rate of change in the Producer Price Index (PPI) of inflation is already declining significantly.

Producer prices are input costs that businesses pay for everything from raw materials to shipping costs to payrolls. And it is typically a very accurate barometer for the direction of consumer price inflation.

The growth rate for PPI peaked at just over 25% and has since fallen significantly to a rate of just over 5% today.

Declining producer prices haven’t shown up just yet in the Consumer Price Index (CPI) data. But easing cost pressures will soon filter down into the CPI numbers, solving the Fed’s inflation problem for it.


Another signal that inflation should soon be on the retreat is the declining growth rate in the M2 money supply, shown in the chart below. 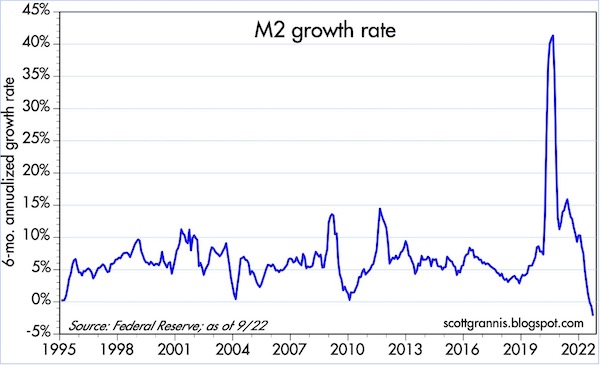 M2 money supply is a broad measure of the money circulating in the U.S. economy. It typically fluctuates up and down along with the business cycle of expansion and contraction.

But notice the unprecedented spike higher in the growth rate during the COVID-19 pandemic. M2 growth exceeded 40% at one point in 2020, as the government shelled out trillions of dollars in stimulus and direct payments to American workers and businesses that were suddenly shut down.

That flood of money set us up for the inflation we’re drowning in right now. But the rapid inflow of dollar bills has since dried up — which means inflation should too.

You can clearly see that as the impact of the pandemic faded, so did the need for stimulus. The money supply growth plunged more recently, with M2 growth now at a negative 2.2% annual rate in the last six months.

Given all this real-time evidence that inflation is fading already, I applaud Mary Daly for sounding the wake-up call for the Federal Reserve to take a “victory lap” on inflation and slow down the pace of rate hikes.

Let’s just hope she isn’t the only voice of reason within the Fed.