Editor’s Note: A version of this article first appeared in Inside TradeSmith on April 14, 2022.
This may be the most important financial chart in the world today. 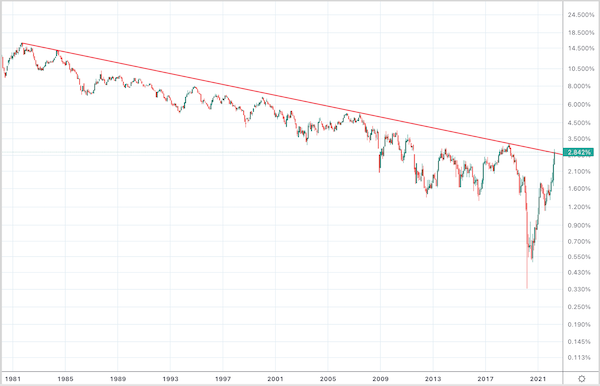 It shows the interest rate (or “yield”) on the benchmark 10-year U.S. Treasury note over the past 40-plus years. However, the long-term charts of every other Treasury security from two-year notes to 30-year bonds look almost identical.

As you can see, yields have been in a powerful downtrend – defined by a series of lower highs and lower lows – since the early 1980s.

Each time yields have touched – or sometimes just approached – this multidecade downtrend resistance (represented by the red line), they’ve peaked and begun to move lower. And each time this has happened, some kind of trouble has followed relatively soon after.

In some cases, the economy has fallen into a recession. In others, we’ve experienced a bear market or financial crisis. And in a few, we’ve seen both.

In other words, these resistance lines appear to indicate the point where interest rates become “too high” for the economy or markets to support. And as you can see, these points have been occurring at lower and lower levels over time.

That isn’t particularly surprising if you think about what’s happened to the U.S. and global economies since the 1980s.


The predominant theme of this era has been debt. Governments, corporations, and consumers have all taken on more and more debt over time. And the higher debt levels go, the greater the impact of a given increase in interest rates.

As a simple example, suppose you borrowed $1,000 at an annual interest rate of 5%. This debt would require you to pay $50 in interest each year until the principle was repaid in full.

If your rate suddenly rose to 10% or even 20%, the cost to service this debt would rise to $100 to $200 per year. You wouldn’t be happy about it, but it probably wouldn’t have much of an impact on your overall financial health.

However, if you borrowed $1,000,000 at 0.5%, it would probably be a different story. In this case, a similar percentage move in your interest rate to just 1% or 2% could potentially bankrupt you.

This is arguably what has happened on a global scale over the past 40 years. And unfortunately, interest rates are now bumping into these critical long-term resistance levels right now.

The path that rates take from here could have significant consequences for the economy and the markets for the next several years.

If the long-term downtrend in rates remains intact, we should see yields across the entire Treasury curve peak and begin to move lower in the weeks and months ahead.

On the bright side, this scenario would imply that inflation – which is currently at 40-year highs – is likely to peak and begin moving lower as well. And it would likely be positive for most stocks in the near to intermediate term.

However, this path would almost certainly lead to a recession in the next year or so too. And given the historically high valuations in equity markets, this could trigger a severe bear market in stocks before the Federal Reserve begins to ease again.

This scenario is essentially what we’ve seen every five to 10 years over the past four decades. But there is one crucial difference between today’s market environment and others during this period: inflation.

The latest government data released last week showed that consumer prices rose at an annualized rate of 8.5% in March.

As I just mentioned, we haven’t seen inflation that high in the U.S. since the long-term downtrend in rates began in 1981. But even that shocking statistic doesn’t tell the whole story.

The government has adjusted the way it calculates inflation over the years. If you were to calculate inflation the same way the government calculated it in the early 1980s, today’s rate would be well over 15%.

That would be the highest U.S. inflation rate on record. And while inflation could decelerate a bit in the near term, it currently appears extremely unlikely to fall back to anywhere near the relatively low levels of the last 40 years.

As a result, I believe it’s possible yields could break out of these long-term downtrends and continue higher in response.

This path could also lead to a recession and a serious bear market in stocks like the first path I just mentioned. However, this one comes with an additional risk due to the relatively poor fiscal health of the U.S.


As you can see below, the U.S. currently has a dangerously high debt-to-GDP (gross domestic product) ratio of 125%.

The government is also currently running the largest budget deficits outside of World War II – both in nominal terms and as a percentage of GDP.

This combination – alongside a considerable decline in investment demand for U.S. Treasury bonds in the past several years – suggests that even a modest increase in interest rates could quickly become a severe problem for the U.S. Treasury market.

In this scenario, I believe the Federal Reserve will need to pivot and restart quantitative easing (QE) – which only officially ended last month – to cap interest rates and support the market.

Notably, the Fed may have to do this even if it stokes inflation further. And depending on how quickly rates rise, it could potentially act even before we experience any significant weakness in the economy or the stock market.

(For the record, I doubt the Fed will actually call it “QE.” It’ll likely give it some new nondescript and jargony name, but the result will be the same.)

Essentially, I believe either path in interest rates will ultimately force the Fed to resume easing in an attempt to save the debt-based financial system (again). The only question is how quickly it will need to do so.

In the first scenario, the Fed likely acts later – up to a year or more down the road – and only after significant trouble hits the economy or stocks.

In the second, it could potentially act as soon as the next several months. And again, it could do so before we experience any significant weakness in either the economy or stocks.

Regardless of which scenario plays out, I expect further easing will create a massive rally in risk assets like we saw between 2020 and 2021. However, in the second scenario, it’s likely that hard assets and inflation-friendly investments will continue to outperform as they have in the past several months.

Energy Costs Could Be 17% Higher This Winter. Here’s One Investment to Make Before That Happens.

How I Made $2 Million in the Stock Market