In 1994, conspiracy theorist G. Edward Griffin penned a 608-page exposé of the U.S. Federal Reserve, how it was created in secret by the ruling elite, and how its “behind-closed-doors” machinations game the global financial system.

The book, “The Creature from Jekyll Island,” sounds more like a horror flick than the best-selling financial tome that it is. But it draws its name from the state-owned isle just off the coast of Georgia, where, in 1910, six men met and created the blueprint for the U.S. central banking system — the “creature” that is the target of Griffin’s ire.

Much of what the author alleges about the Fed has been debunked. But these days, when it comes to feeling scornful about the central bank, Griffin has plenty of company.

The Fed has a dual mandate to maximize employment while keeping marketplace prices relatively stable.

And if you’ve been to the grocery store lately, visited your local car dealership, or tried to buy a house, you might not feel like America’s central bankers are doing such a great job.

The beast you and I know as inflation has emerged from its four-decade slumber. And so far, it’s a monster that the “Creature from Jekyll Island” can’t seem to vanquish.

Fed policymakers have a long-term inflation-rate target of 2%. But we’re well above that right now.

In late January, the consumer index that measures changes in what we pay for goods and services spiked to 7.5%, its highest level since February 1982.

For a bit of context, that’s more than four times the annual rate of 1.8% we had back in 2019, right before COVID-19 brought global commerce to a grinding halt.

Primed with cheap money from the Fed and stimulus cash, the American economy has rocketed back, igniting demand and triggering inflation.

A little inflation is a byproduct of a healthy economy. But when prices soar, our wallets feel the squeeze, our paychecks don’t stretch as far, and we start to worry that our savings and other investments will be ground down.

To help blunt that fallout, I’m bringing you a stock play that will kick the inflation monster right in the teeth. It’s a company that’s thriving despite heightened volatility and inflation. I’ll even provide some additional “color,” because Wall Street heavy hitters are starting to get excited about this particular stock.

At its core, inflation is a reduction in purchasing power of the dollar. But how is this measured?

The Bureau of Labor Statistics produces the Consumer Price Index of Urban Consumers, or CPI-U, which looks at a basket of goods that most consumers need and buy. If we’re really trying to understand the impact inflation is having at a particular moment, this is an important number to watch because this “urban” group accounts for 93% of the U.S. population.

The survey looks at what Americans are paying in four major categories:

These categories are weighted by how much is typically spent. Generally, “services” gets designated the highest in “relative importance,” which is one of the reasons that a spike in housing rental fees (up 12% over last year) helped push inflation to historic levels in January.

Another culprit was the way strong demand for goods combined with pandemic-triggered supply-chain shortages. This chokepoint — not being able to get highly desired stuff onto store shelves or car lots — meant that too much money was chasing too few of the goods all of us wanted.

That’s a recipe for soaring prices. But what’s being done about it, and who’s responsible?

Redemption For “The Creature”?

To manage inflation, the Fed has two major weapons:

When the Fed buys these assets, it injects cash into the financial system and the economy, freeing up money that the banks can then loan to consumers who want to make big-ticket purchases like cars, houses, commercial property, even small businesses.

The Fed can also raise (or lower) interest rates — and is expected to do the former next month.

The Move to Make Now

While shelling out more at the grocery store and the gas pump, we need to also consider what inflation is doing to our savings.

And the fact is, there’s one type of investment that’s a “savings safeguard” — one that reduces the impact of market volatility while also blunting the eroding effect of inflation.

And not just any dividend stocks. We want to find companies with a track record of consistent dividend increases.

In fact, during periods of high inflation, history shows that dividend-paying companies that increased their payouts the most substantially outperformed the broad market.

Dividend payouts generally occur quarterly, as an amount per share.

Here’s how to look at this. When the dividend payout is announced, multiply that amount by the number of shares you have before the “ex-dividend” date.

Any shares bought on or after April 1, in this case, will not be included in that distribution.

In the past 92 years, 40% of overall stock market returns have been attributed to dividends. They’re that important.

And during volatile markets, like the ones we’re navigating now, regularly scheduled dividend payments help reduce the volatility in a stock’s total return.

Dividends can help push stock market returns higher when prices fall — in some cases even negating almost the entire decline, as we saw during the 2000s. And when inflation rages — like the double-digit scourge of the 1970s, dividends accounted for 71% of the S&P 500’s total return.

This period of high volatility and high inflation make now the perfect time to add dividend-paying stocks to your holdings.

This brings me to a stock that I believe is set to clobber the S&P 500, giving you better than double the return of that bellwether index.


This Fossil Fuel Giant Is No Dinosaur

On Jan. 26, Chevron declared a quarterly dividend of $1.42 per share. The payout was bumped up 8 cents per share, or 6%, which puts Chevron on track to deliver a dividend increase for 35 straight years.

Fourth-quarter earnings came in at $5.1 billion, while full-year profits totaled $15.6 billion. Although it did miss earnings expectations by 17.42%, this is still an attractive stock.

First and foremost, Chevron’s cash flow last year tipped the scales at $29.2 billion — nearly triple what the company reported the year before.

Jim Cramer of CNBC’s “Mad Money” put Chevron at the top of his list for this year, saying he’d sold some of his Walmart stock to take a bigger position in CVX.

“Chevron is generating more cash today than they did at any point in company history,” he said.

And the dividend is safe — despite the missed earnings — since “even [with oil] at $60 a barrel… Chevron believes [it] can generate $25 billion of excess cash over five years.”

Under the lens of the TradeSmith tools, we find even more to get excited about.

CVX is in the Health Indicator Green Zone, having entered on March 4, 2021. Since the beginning of this year, the stock price has gained as much as 16.39%, and that’s in less than two months. 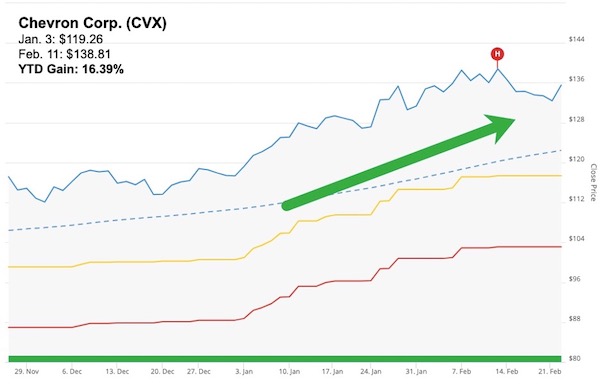 CVX qualifies for three of the Ideas Lab strategies:

And CVX is in the portfolios of at least three billionaire investors we track, including Ray Dalio and Warren Buffett.

When you add it all up, you’re talking about a stock worthy of attention. However, before pulling the trigger, do your own due diligence.

I want you to have a better understanding of inflation and how the Fed could act to address it. And I want you to see that even in periods of high inflation, depressing stock prices, and whipsaw volatility, you can still find stocks with strong upside potential.

Tell me what you think. How much of your portfolio is dedicated to dividend stocks? How else are you navigating inflation?