There are lies, damned lies, and statistics. — Mark Twain
Last week you probably heard the news: The U.S. economy is “unofficially” in recession… according to the D.C. statisticians, that is.

Since then, I’ve listened to a steady drumbeat of doom about how the economy and stock market are now finished. But not so fast.

Here’s the real story. This is more like the case of the recession that wasn’t there, as you can see in the chart below. 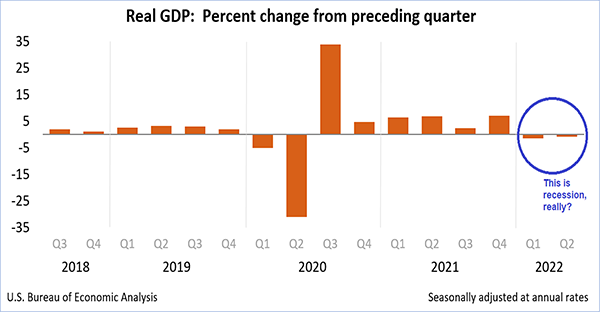 Does that look like a frightening recession to you? You can hardly notice the mild dip in first- and second-quarter gross domestic product (GDP). It’s barely a blip on the radar. It’s a rounding error.

That’s especially true compared to the steep declines in Q1 and Q2 2020, during the COVID-19 crunch, which you can’t miss in the middle of this chart.

Now THAT was a recession. GDP dropped 5% in the first quarter of 2020, then plunged 33.4% the very next quarter. We’ve never seen anything like it before. Thankfully, it ended just as quickly as it started, with the U.S. economy swiftly rebounding 41.4% in Q3 2020.

That’s nothing… nada… zippo… zilch. But according to the economic “experts,” two straight quarters of negative GDP growth equals recession.

Here’s the truth: Look past the headline numbers reported by the nightly news. Dig a little deeper and you’ll see that the economy improved in Q2 from Q1 once you adjust the data for inflation.

And that’s a must.


Inflation is running at 40-year highs right now, so almost all the economic data is getting distorted by the sudden rise of inflation.

Current-dollar GDP actually increased by $465 billion last quarter, up 7.8%. That’s compared to an increase of just 6.6% in Q1. In other words, adjusted for inflation, growth is accelerating, not slumping.

The truth is, almost the entire headline “drop” in GDP last quarter was due to “inventory adjustments,” a pullback in housing investment due to higher rates, and short-term differences in imports versus exports.

It’s more smoke and mirrors from the government — the Bureau of Economic Analysis (BEA), to be exact.

It’s more like the Bureau of BS, if you ask me.

I’m not losing sleep over this so-called slump in growth, and you shouldn’t either.

What to Really Know About GDP Reports

First, the GDP report is notorious for being revised multiple times after the fact based on “new data.” That’s the government’s way of applying a positive spin to the numbers. Last week’s number was only the first estimate for Q2.

The final number, which we don’t get to see until months from now, could and probably will be much different, and likely higher than negative 0.9%.

Second, even if the final numbers still point to two straight quarters of negative economic growth, that doesn’t guarantee it’s actually a recession.

This is a group of eight supposedly nonpartisan economists and academics whose job it is to decide — usually well after the fact — exactly when recessions begin and end. According to Bloomberg, “the committee meets in secret and doesn’t announce its gatherings in advance or even in retrospect.”

I’m not making this up.

It’s not “officially” a recession unless the committee issues a press release declaring, “Recession on!”

How the NBER BCDC (Washington loves its acronyms) actually goes about its task is, well, secret. But apparently the committee reviews a range of monthly economic data to decide if we are or are not in a recession.

And only they, the committee members themselves, know exactly how the tea leaves are read and interpreted.

Honestly, would you trust your hard-earned money to what these random people working in the shadows have to say?


By the time they get around to declaring that we’re in a recession, it may well be over already.

The fact is, IF we’re currently in a recession, we still have a robust economy.

The labor market is tight as a drum right now, with far more job openings than qualified workers to fill them. Even the Federal Reserve says so. That’s a big reason why it’s raising rates so aggressively. But just look at the data.

In a “real” recession, folks would be losing jobs by now in the tens if not hundreds of thousands. That’s not the case.

Plus, consumers are flush with cash and are spending robustly. Retail sales hit $1.7 trillion in the first quarter of 2022, up 10.9% year-over-year. During a “real” recession, folks worried about jobs would be hoarding cash, not spending like mad at double-digit rates.

Don’t get me wrong; the U.S. economy could be facing much weaker growth by next year. That’s especially true if inflation remains sticky and the Fed keeps raising rates higher than now expected. But that will be a mid-2023 issue for investors to face, not mid-2022.

Bottom line: Don’t listen to the boo birds in the financial press trying to scare the daylights out of you by saying stagflation, a recession, or even a depression is just around the corner.

Keep your eyes on stock and bond prices instead.

They will show you the way.