So why is it we only ever hear about gold on the news? Shouldn’t there be just as much opportunity in silver, let alone other precious metals like platinum?

Absolutely… but probably not in the way you think.

You see, even though they’re both precious metals, silver is WAY more abundant than gold. 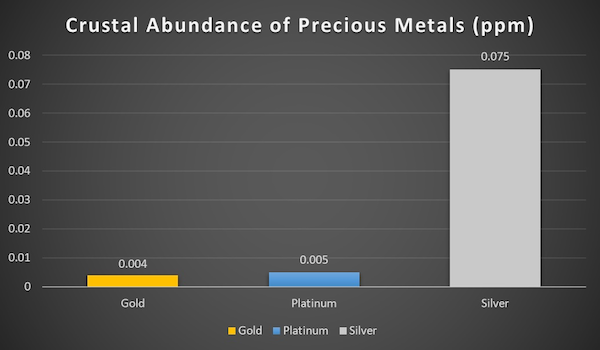 Source: Silverbullion.com
According to the U.S. Geological Survey, about 244,000 metric tons of gold have been discovered in all of history.

Wait, so silver is more abundant, yet it’s gained more in the last two years than gold? How can that be?

I want to dig into that question, as well as how inflation affects gold and silver, and look at a neat way to trade the historical relationship between them.

Most of us go about our daily lives never thinking about what goes into the different products we use. Which is why you probably didn’t notice how many times you interacted with silver this week alone. Here are a few examples:


Source: https://www.visualcapitalist.com/silver-through-the-ages-the-uses-of-silver-over-time/
I could keep going, but you get the point. Silver is a big part of our lives. In fact, over half the demand for silver comes from industrial and solar cell usage. Less than 25% goes toward jewelry. 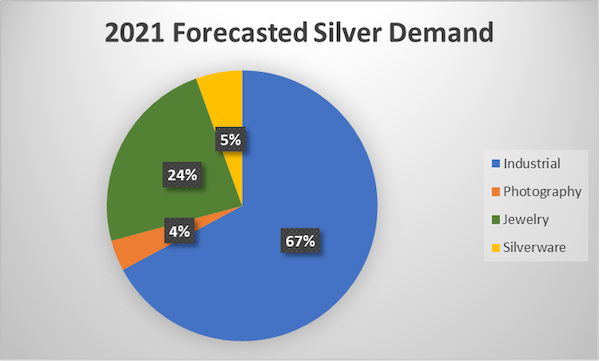 Source: The Silver Institute
This explains why silver saw such huge gains off the pandemic lows.

You see, silver trades as a combination of precious metal and stock. It’s much rarer than other commodity metals like copper and aluminum. Yet the amount we produce annually is around 24,000 metric tons. Plus, we get another 5,665 metric tons from recycling each year. That’s about 1.7% of the total silver mined to date.

Its heavy usage in manufacturing means that when economies slow down, demand for silver drops. And when that happens, the price of silver gets crushed.

We only mine around 3,000 metric tons of gold each year, or 1.23% of the total gold mined to date. That might not seem much smaller than 1.7%, but over time, it means that the supply of silver is much more variable than the supply of gold.

Plus, half of gold usage goes toward jewelry.

Source: Statista
Simply put, over a long period of time, gold acts as a better store of value than silver simply because the amount of gold doesn’t change by all that much.

It’s a big reason why some economists advocate for a return to the gold standard. Yet the rarity of gold is also why Nixon took the U.S. off the gold standard, precisely because he feared the U.S. didn’t have enough gold to pay other countries that were trying to cash in.

(You can read more about the history of the gold standard in my recent newsletter that covered stagflation.)

Now, because gold acts as a better store of value due to its rarity, inflation is more likely to have an impact on the price of gold than silver. That isn’t to say that inflation won’t impact silver. Just that gold is a “purer” way to hedge against inflation.

While gold and silver may act differently over the long haul, during periods of several weeks or months, they often trade in tandem.

So we can use divergences between them as a way to create mean-reversion trades.

In a mean-reversion trade, you look for a price or metric that has moved to an extreme, then make a trade on the assumption that the price or metric will head back toward its average.

I talk about this extensively when I discuss options and implied volatility.

The idea is quite simple.

We find periods of relatively quiet movement in gold and silver. Then we map out the upper and lower boundaries for the trading range of the gold/silver ratio. From there, we wait for the ratio to reach one of these boundaries and take a trade in the opposite direction.

Here’s what it would look like on a chart.

Source: Tradingview
This chart shows the ratio of the price of gold to silver on a daily basis over the last year and a half.

I’ve drawn two orange trendlines at $80 and $76 to form the upper and lower boundaries of the trading range for the ratio.

Over the last eight months, the ratio between gold and silver has tended to stay between these two trendlines. While it might spend a few weeks on either side, it’s managed to move back toward the mean each time.

As a trader, I would want to buy gold and sell silver at the lower trendline and do the opposite at the upper trendline. You can do this a few different ways:

I like using options in this case because every so often, the ratio between the two can “reset,” as it did in March 2020 or from February 2021 to August 2021. Because remember, over longer periods of time, the ratio of gold and silver will diverge. But on shorter time frames, they tend to trade in tandem.

Options work well here because you can define exactly how much you can lose up front. Ideally, you can pick up a few wins before gold and silver hit one of those “reset” periods.

That’s why risk management here is crucial. And don’t be afraid to wait for the ratio to move beyond those trendlines before you initiate a trade.

Now, since the Fed is expected to raise rates to fight inflation, what do you think will happen to the price of gold and silver? Remember, there’s a whole lot of demand for industrial production right now.