From Speaker of the House Nancy Pelosi’s visit to Taiwan to the passing of a new piece of legislation, one thing is clear: The United States never wants to run out of semiconductors.

The United States CHIPS and Science Act has passed both the Senate and the House, and once signed into law, it will provide $52 billion to increase the domestic production of semiconductors.

In addition, while spending less than 24 hours in Taiwan last week, Speaker Pelosi met with Mark Liu, the chairman of Taiwan Semiconductor Manufacturing Co. Ltd. (TSM). Although Taiwan Semiconductor is an overseas company, American businesses are heavily reliant on it, with 64% of TSM’s total sales in 2021 coming from the U.S., and Apple Inc. (AAPL) alone accounting for one-quarter of TSM’s sales in 2021.

Taking a bet that the U.S. government would enact a bill with incentives to support domestic semiconductor production, Liu’s company already started construction last summer on a $12 billion factory in Arizona.

Having a tech background, I appreciate how a semiconductor works, but it’s a complicated topic, and I want to focus on why all of this is important from an investing perspective.

All you really need to know is that semiconductors are used in everything from video game systems to cars to washing machines. And when there aren’t enough semiconductors, fewer products can be produced, customers end up waiting for items to be restocked, and companies lose out on sales.

Semiconductors are such a vital component of the electronics that we purchase that the industry is expected to grow in value from $573.44 billion in 2022 to $1.38 trillion by 2029, and there will be a lot of money made by picking the right companies to invest in.

Maybe you’ve seen a few companies touted on the “best semiconductor stocks to buy” lists. These five are normally included:

Our system says to stay away from each and every one of them because they are in our Red Zone.

However, there is one overlooked company that our system is saying is a “buy.” It just set a record in revenue, and its revenue outlook for the current quarter topped analyst expectations.


Flipping the Moneymaking Switch ON

ON Semiconductor Corp. (ON), often referred to as onsemi, is a chip supplier that fuels emerging technologies like industrial workplace automation, energy infrastructure, 5G and cloud connectivity, and autonomous and electric vehicles (EVs).

It has a strong leadership team, with Hassane El-Khoury being appointed to CEO in December 2020. You always want to look for CEOs with track records of success, and El-Khoury was previously the CEO of Cypress Semiconductor Corp., which sold itself for $10 billion. Thad Trent (current CFO of onsemi) worked with El-Khoury at Cypress Semiconductor Corp. as the CFO, and during his five-year tenure, Cypress’ revenue increased from $723 million to $2.5 billion.

The company’s presentation is refreshingly straightforward, and it’s great to see the acknowledgement that it is working for its shareholders. 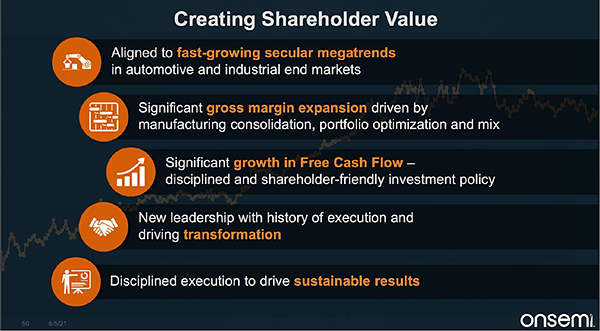 Source: Onsemi Investor Presentation August 2021
With autonomous vehicles and EVs being popular topics in the investing world, that’s the segment onsemi serves that I am going to focus on today.

The company designs image processors and vision sensors that are used in something called advanced driver-assist systems (ADAS), and the technology really is amazing.

In the presentation slide below, onsemi shows how its sensor identifies long-distance objects 100 times better than the human eye, whether it’s a clear day or a dark night. 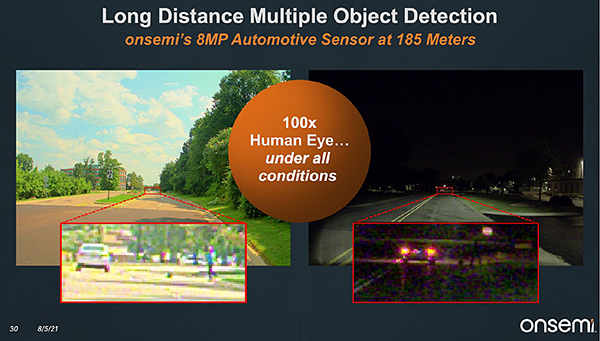 Source: Onsemi Investor Presentation August 2021
Over the past year, while semiconductor stocks as a whole have struggled, ON has provided double-digit returns. 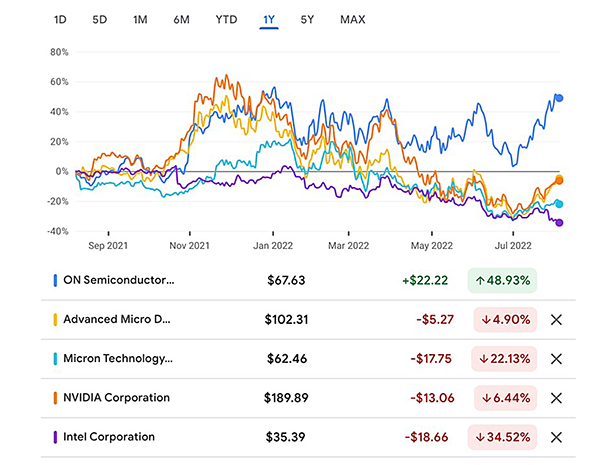 Source: Google Finance
This performance shows the company has been able to not only weather volatile markets but even make its shareholders profits, which is good to know if things get even choppier.


In more recent news, ON just recorded its first-ever $2 billion revenue quarter, which was a 25% increase from the same time last year, and demand is outpacing supply for its automotive and industrial segments.

Looking ahead, the company expects to generate between $2.07 billion and $2.17 billion in the current quarter; analysts expected it would generate $2.02 billion.

ON is considered a high-risk investment with a VQ score of 43.62%, but it is flashing the “buy” signal, by being in our Green Zone.

And if you believe there will be a large need for semiconductors to power more automation in the workplace and more electric and autonomous vehicles on the roads, our system is saying ON is the way to invest.