Inflation is “killing us,” according to billionaire hedge fund guru Ray Dalio. And I couldn’t agree more.

The latest government data shows consumer inflation (via the Consumer Price Index, or CPI) raging at a 7.9% annual clip.

Even worse, producer prices – the costs businesses must pay to produce goods and services – are soaring 10% year-over-year.

This has obviously translated into greater volatility for stocks, bonds, currencies, you name it. And inflation is likely to get worse before it gets significantly better.

That’s why the Federal Reserve is sounding the alarm and planning to significantly tighten interest rates in the months ahead to try and tame inflation.

I wish the Fed the best of luck, because the leading indicators of inflation I’m watching show no end in sight to higher prices.


First, the Fed claims it can concentrate on tightening monetary policy to stabilize prices because its other mandate, full employment, is doing just fine, thank you.

The U.S. economy created 678,000 new jobs last month alone, with the unemployment rate dropping to just 3.8%. In fact, the American labor market is very tight right now as we experience the worst labor shortages in decades.

And that’s not going to change anytime soon, which will surely feed back into even more inflationary pressure. 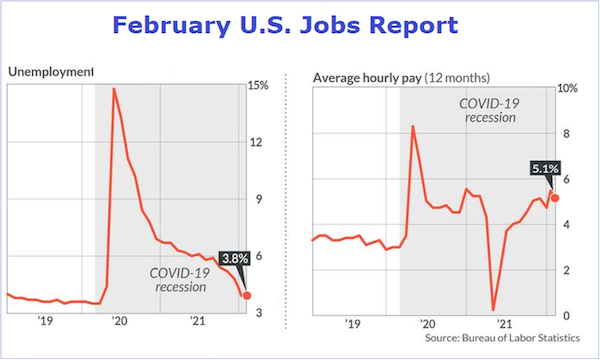 Average hourly earnings are up 5.1% year-over-year, the highest growth rate in several decades, and more than double the wage inflation rate of the year before.

The trouble is, rising employment costs tend to be a sticky leading indicator of inflation.

That’s because when labor markets are tight, as they are right now, it’s easy for companies to give raises to retain workers or attract new hires. But it’s extremely difficult to take back those wage gains later.

Second, there is another leading indicator of sticky inflation that’s bound to keep upward pressure on prices: housing.

And housing costs could easily prove to be a big game changer, pushing inflation higher for much longer than you think.

Let’s start with evidence from the Federal Reserve itself.

In a paper published just last month, analysts at the Federal Reserve Bank of San Francisco point out that leading indicators of rising rents in the U.S. could push up future inflation.

In fact, they point out that “two leading indicators — current asking rents and current house prices — can help forecast the path of overall inflation for the next two years.”

Taken together, home prices and rents have a big influence because they make up 32% of the basket of goods in the CPI calculation. In other words, nearly one-third of consumer inflation is housing-related.

And these measures are just starting to go through the roof.


A home rental index compiled by Zillow shows rents in America up 15.9% over the past 23 months. Meanwhile, Zillow’s U.S. house price index soared 28.4% over the same period. 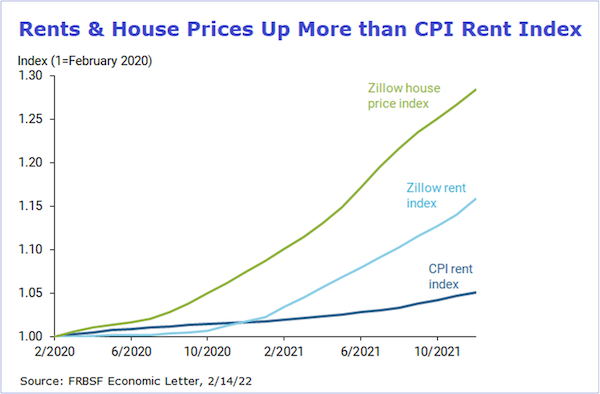 This means that these sharply higher rents and home prices are only now starting to push up consumer prices.

So, with inflation rates likely to get even worse (that is, higher) before getting better, what’s an investor to do?

No doubt many folks are tempted to sit it out on the sidelines in cash, considering rising inflation and market volatility. But that would be a huge mistake. In fact, cash is the last thing you want to hold on to right now.

As Ray Dalio said in a recent interview: “People think that the safest investment is to hold money in cash. It’s the worst investment.” That’s because you are constantly losing purchasing power to inflation. Your money loses value to the tune of 3% to 5% per year.

And while we are on the subject of housing, many people mistakenly believe real estate is always a great hedge against inflation. Not so fast.

It’s true that real estate is less vulnerable to high inflation than assets like bonds and cash. It’s also correct that rents go up during inflationary times, and so do house prices, at least in nominal terms.

But when adjusted for inflation, home prices can easily lose value in terms of real purchasing power. It all depends on how high inflation is.

If inflation is lower than 4%, on average your home will appreciate. But if inflation is higher than 4% – and it’s almost twice that right now – then your house loses value in real terms when adjusted for inflation.

The bottom line is, real estate isn’t much of a hedge against inflation with consumer prices up nearly 8% year-over-year.

So, what is a good hedge against inflation? Believe it or not, stocks. And in my article next week, I’ll give you the hard evidence, including which types of stocks beat inflation historically.