Just about every talking head on CNBC these days is invoking the “r” word… as in “recession.”

The spectrum of opinions seems to range from “we’re already in recession now but just don’t know it yet” to “I don’t see how we can avoid recession with higher interest rates, war in Europe, stocks crashing, China, etc.”

I will readily admit the odds of recession are on the rise. That said, if we really are in recession already, or soon will be, it’s not showing up in the real-time data and indicators I follow closely.

It’s crucial to keep a watchful eye on these indicators. Because they just might tell you which way stocks are likely to move next.

1. The Index of Leading Economic Indicators Hasn’t Sounded the Alarm

I covered the index of leading economic indicators in a previous story. To recap, this indicator has consistently peaked prior to every recession since the 1960s. The lead time from a peak in the leading indicators to the start of recession is more than one year on average. And the shortest early warning signals arrived at least nine months prior to an economic contraction.

So if a recession was already here, or just around the corner, then it should be showing up by now in the leading indicators, but it’s not. In fact, the index is up nearly 1% over the past six months. Keep an eye out for the next data release in mid-June.

Corporate sales and profit results for the first-quarter 2022 reporting season have been absolutely stellar. Seventy-seven percent of S&P 500 companies beat earnings estimates. But I personally like to look more closely at top-line sales.

There is too much room to play financial shenanigans with reported earnings. But that’s not the case with my two favorite fundamental metrics: sales and cash flow. And first-quarter S&P 500 revenue results were even better than the profit tally. 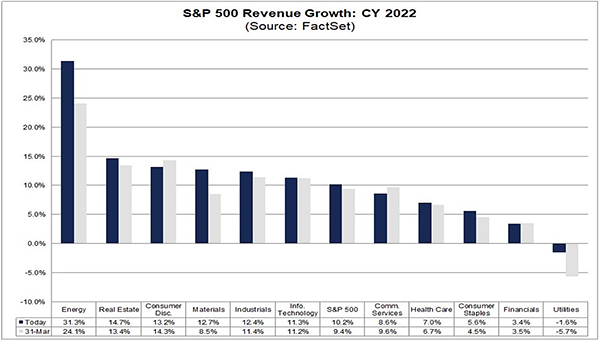 S&P 500 companies beat Wall Street sales estimates by 2.7% last quarter, which is well above the 10-year average of only 1.1%. And in spite of all the headwinds (higher interest rates, war in Europe, stocks crashing, China, etc.), companies are still raising the bar on sales expectations for this year.

You can see this in the chart above, in each sector where the blue bar is higher than the grey bar.

At the end of March, expectations for the S&P 500’s sales growth stood at 9.4% for 2022 as a whole. Today, that number is up to 10.2% and rising. Only two S&P sectors have lower sales estimates today than at the end of March.

That’s nine out of 11 sectors, or 82% of the S&P 500, seeing continued strong sales momentum this year. Communication Services and Consumer Discretionary are the only two sectors with a noticeable decline in sales estimates, while the financials sector is flat.

Corporate profit growth, and more importantly sales growth, is another key leading indicator of trouble ahead for stocks and the economy. With all the hand-wringing going on in the financial press right now, you would think S&P 500 revenues were plunging, but they’re not. The fact is, estimates are still on the rise.

You should keep a watchful eye on this real-time indicator too. If corporate sales growth does start to roll over, that’s a red flag. But that is simply not the case right now.

As I said, these indicators have a major bearing on which way stocks go from here. That’s because stock market declines associated with economic recession are typically much worse (and longer-lasting) than market declines without a recession.

The S&P 500 fell nearly 20% from its high in January to its recent low. And investors are asking, was that the low, or just a temporary low destined to be broken on the downside?

Coming full circle, the answer is: It depends on whether the U.S. falls into recession or not.


3. If We Avoid Recession, the Worst Could Be behind Us 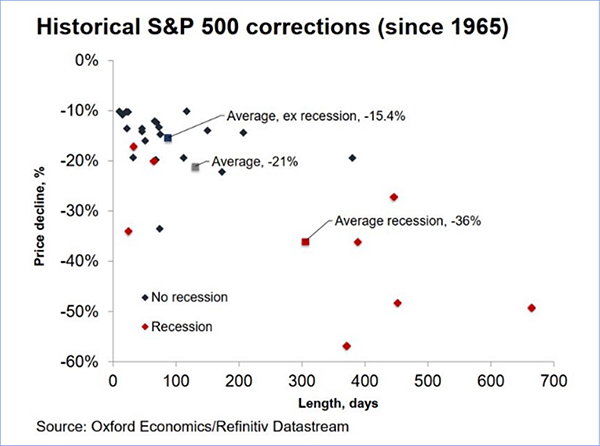 As you can see, there’s a big difference.

Now I realize that a 15% decline is still painful, no two ways about it. But it’s a lot better than the alternative, which is a stock market that falls more than twice as much in a recession.

Remember, the S&P 500 has already dropped almost 20% year-to-date. And many individual stocks have fallen much more than that. If we do manage to avoid recession, then the worst of this market decline may already be over or at least close to being over.

All I’m saying is, even with the steady drumbeat of doom and gloom we hear every day, you should at least be open-minded to that possibility. But that doesn’t mean it’s time to load up on stocks just yet. You should absolutely remain cautious just in case.

After all, our TradeSmith indicators have flagged Bearseye signals in multiple market indexes, including the S&P 500. In fact, the only major American index not in the Red Zone right now is the Dow Jones Industrial Average (and it’s close). This means you should have already raised plenty of cash as stocks in your portfolio hit the Red Zone as well.

It may still be too soon to put lots of cash back to work, but you could do some selective buying in healthy, Green Zone stocks that are trading above their Smart Moving Averages.

And keep more dry powder handy. Because if we do manage to avoid recession, then the worst of the sell-off might be in the rearview mirror.

If that’s the case, we should know soon enough, because our TradeSmith market timing indicators will reflect that better outlook, showing you the way to new potential buying opportunities.

In fact, I just shared a potential opportunity with all TradeSmith members right here.