After more than 40 years in the workforce, millions of Americans are facing an ugly truth: the retirement they’re planning may never arrive.

In the U.S., one in five workers is aged 55 and over. According to a survey by the research firm RAND, that group is projected to swell to one-in-four, or 41 million, by 2024.

And it’s not a wealthy group. Baby boomers — folks born between 1946 and 1964 — have an average of only $152,000 saved for their “golden years,” according to a recent survey conducted by the TransAmerica Center for Retirement Studies.

And if you look under the hood, there’s an even sadder tale unfolding.

There are thousands of workers who retired and then had to go back to work.

Want proof? Look at this: Americans ages 65 and older are the fastest-growing slice of the U.S. labor force segment. And 40% of those workers collected their proverbial gold watch, cut the cake in the breakroom, and spent time on the golf course — only to “unretire” by returning to the workplace.

Many of those “golden agers” have to come back to work because they can’t afford to retire.

Call it the “Great Unretirement Crisis.” 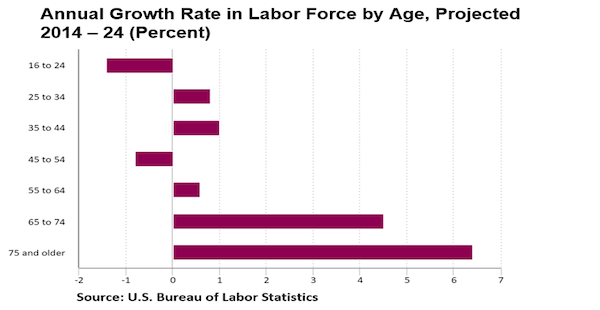 Worse yet, the baby-boom generation is largely delaying retirement. In the recent phenomenon dubbed the “Great Resignation,” as many as 33 million Americans have quit their jobs since spring 2021.

Of those quitters, Harvard Business Review found the highest concentration in ages between 30 and 45, while resignation rates fell for those between the ages of 60 and 70.

According to the Pew Research Center, the number of baby boomers staying in jobs past their retirement age is at the highest annual rate in 50 years.

So, while millennials are bailing on employers, older folks are neither resigning nor retiring.

I believe this discovery reveals a fatal flaw in the widely accepted “Retirement Rule” that puts the retirement dream at risk like never before.

Today, I’ll start by defining the rule and why it was established. Then we’ll examine the four wealth-leeching threats that have rendered that rule unusable.

But I also want you to take heart: There is a solution, and I’ll also show you the one solution that can put you back on the retirement path.

The Retirement Rule, also known as the 4% rule, was based on the 1994 work of William Bengen, an investment-management specialist who wanted to answer two questions:

In short, Bengen wanted to find out how you could retire, enjoy those senior years, and avoid outliving your money.

By studying rolling 30-year stretches from 1926 to 1963, Bengen made what he believed to be the critical discovery: If you want your nest egg to last for at least 30 years, the optimal initial withdrawal rate — regardless of market conditions — was 4%.

Every year going forward, you withdraw the same amount as the year prior, only increased slightly to account for inflation. For example, if inflation is at 3%, you’d withdraw $40,000 plus an additional $1,200 to cover inflation.

The following year you’d begin with $41,200, then add in an amount equal to the new inflation rate. This system ensured your standard of living remained constant.

In Bengen’s own words, a “first-year withdrawal of 4%, followed by inflation-adjusted withdrawals in subsequent years, should be safe.”

The 4% rule is not without critics. But before we explore the challenges, let’s look at the assumptions.

In truth, Bengen was more aggressive. In his report “Determining Withdrawal Rates Using Historical Data,” the retirement expert wrote that it was “appropriate to advise the client to accept a stock allocation as close to 75% as possible and in no cases less than 50%.”

So, a 50/50 split would have been the minimum, as far as stocks are concerned. Bengen favored a higher stocks-to-bonds ratio.

The 4% rule also assumes an average inflation rate of about 3%, warning that an “event” — the one-two punch of a downturn in stocks and an inflationary surge — could upset the allocation arrangement.

Bengen’s retirement rule appears reasonable until you look at what I refer to as the key “retirement threats.”

Retirement Threat No. 1: Life in a Zero-Yield World

The 4% rule is a product of the mid-’90s economy and is probably outdated. You just saw that it presumes a mixed bag of investments — a balance of stocks and bonds.

Back in the 1990s, however, bonds yielded three and four times what they yield today. And that means that a portfolio weighted more heavily toward bonds may not provide enough growth to cover you for 30 years or more.

And bond yields aren’t the only concern. The U.S. Federal Reserve is widely expected to raise interest rates this year — perhaps three or four times. And since bond prices move opposite interest rates, a hawkish central bank could slash the value of the bonds in a retirement portfolio.

Retirement Threat No. 2: When You Reach that Wrong Number

As you read this, stocks are trading at some of their highest valuations ever, inflation is at its highest point in four decades, and bond yields remain near historic lows. It’s a completely different environment from the one that investors faced when the 4% rule was devised in 1994.

Understanding that, and using a Monte Carlo simulator, investment researcher Morningstar said a more realistic withdrawal rate would be 3.3%.

A Monte Carlo simulation predicts the probability of different outcomes when random variables are present. It helps explain the impact of risk and uncertainty in prediction and forecasting models — like Bengen’s Retirement Rule.

That’s not all: Morningstar favors a flexible withdrawal rate, adjusting amounts so that you take a pay cut after a bear market — but get rewarded with a pay raise after sustained growth.

Let’s face it; what goes up must come down. But if that poor performance comes early in retirement, the damage is much greater, making it harder to preserve money over the long haul than if the correction came later.

This is referred to as “sequence-of-return risk” — and stems from taking withdrawals to cover living expenses after a downturn. It amounts to selling low, or liquidating your assets at fire-sale prices just to make your required income withdrawals.

As the pendulum swings back, a negative impact to savings means you may not have enough actual cash to take full advantage of a rebound. This places you at risk of outliving your money — running out in advance of the 30-year goal.

Therefore the 4% rule — developed to preserve your nest egg — falls short, especially if you get stung by a bad market early on.

And it’s compounded by other threats, including:

That brings us to the final threat of the four. I saved it for last. But it’s actually the biggest.

It’s the No. 1 threat to retirement as conceived by the current rule. And it’s why I believe so many baby boomers are being forced to delay retirement — or return to work after they have.

Retirement Threat No. 4: The Flawed Assumption

The biggest defect in the 4% rule is that it assumes you’ve saved $1 million for retirement. Remember that TransAmerica study — the one that said baby boomers have an average savings of $152,000?

Other researchers made the same troubling discovery.

It’s unconscionable, but nearly one in four Americans have zero savings, according to a study by PricewaterhouseCoopers (PwC).

A three-year survey by the Fed came to an even more alarming finding: The average balance in U.S. retirement accounts was a paltry $65,000.

That’s a long way from the $1 million baseline, which is a flawed number itself.

Remember, this rule was developed way back in 1994, which drives home the fallacy of the Retirement Rule. A million dollars may not be enough, because in 1994, one dollar had the equivalent purchasing power of $1.90 today.

That means today’s money is worth nearly half what it was in 1994. By extension, that indicates a need for nearly twice the amount in your portfolio.

It’s a massive challenge saving $1 million, but today you need to put away $1.9 million to be in the true spirit of Bengen’s original 4% rule.

That’ll last a year, maybe two — but what comes after that?

An aging workforce and the pitiful state of retirement savings adds up to one sobering result — the American Retirement Dream is fading away.


That Promised Solution — Mark Your Calendar

Now, I promised you a solution.

And I keep my promises.

There is hope — even if you don’t have a million dollars stashed away.

Coming up on March 15, at the online Demand Cash Flow Now Summit, you will learn about a retirement income generation strategy that requires only one-tenth of the savings cache that the 4% rule presumes you need.

And the Summit is free.

In fact, we’ll introduce you to a methodical strategy that leverages a specific type of popular stock in a manner that will let you finance your golden years with as much as 90% less than traditional strategies recommend.

Now, I’d like you to tell me what you think. Is the 4% rule broken? Do you believe these threats to retirement are real, and if so, how are you confronting them?