Welcome back to TradeSmith Snippets for another great way to kick off the week.

In this latest edition, my team will update you on one of the most significant moments in cryptocurrency history, the troubled state of investing in movie theater stocks, and what to make of a retail giant keeping its CEO for another three years.

Snippet No. 1: Get Ready for The Merge

Ethereum (ETH), the second-largest cryptocurrency on the market after Bitcoin (BTC), is just days away from one of the biggest moments in crypto’s short history: The Merge.

Set to launch sometime between Sept. 13 and Sept. 15, The Merge is a massive upgrade that will slash Ethereum’s energy consumption by 99.95% and create a significantly more sustainable network virtually overnight.

Right now, Ethereum relies on a power-intensive proof-of-work (PoW) system – the same kind that Bitcoin uses – to mine new ETH and secure the blockchain.

The problem is that mining ETH requires computing power – a lot of it. The annual carbon footprint from mining Ethereum is on par with that of the entire country of Switzerland.

But that changes with The Merge. Ethereum will ditch the sky-high electric bills and switch to a much more efficient proof-of-stake (PoS) system that relies on validators who lock up their tokens as collateral to secure the network.

With so much riding on The Merge, you can bet our very own in-house crypto expert Joe Shew has been tracking this thing like a hawk. And we’re going to share some advice straight from Joe about Ethereum later this week.

In the meantime, for those who are “crypto curious” but not quite ready to buy crypto directly, check out our report on Coinbase Global Inc. (COIN).

Coinbase is the most commonly used exchange by Americans to buy and sell cryptocurrencies, according to a survey from The Ascent, with 56% of respondents saying they had used Coinbase in 2022.

No other exchange came close. Only 27% of respondents said they had used Binance, the next biggest competitor.

Coinbase has become the go-to “on-ramp” for crypto investors because it’s based in the U.S., offers a user-friendly experience complete with educational resources, and has a relatively large list of coins available to buy.

COIN is currently in our Green Zone, and you can find out more about the opportunity here.


Snippet No. 2: Trouble at the Movies

The world’s second-largest cinema chain operator is filing for bankruptcy protection in the United States.

Filing for Chapter 11 allows Cineworld to keep operating while it tries to restructure its debt.

The company hopes to emerge out of Chapter 11 protection by the first quarter of 2023, but it doesn’t promise that will happen.

Movie ticket sales have been in a downward decline for more than a decade, and the pandemic sent movie theater troubles into overdrive.

Source: TheNumbers.com
Cineworld made an aggressive move to purchase Regal in 2017, taking on debt to fund part of the $3.6 billion acquisition. It then had to borrow even more money as the pandemic spread, and people either couldn’t or didn’t want to go to the movies.

The problems of declining ticket sales and aggressive – and sometimes confusing – business moves are not unique to Cineworld.

There’s another movie theater stock you may be familiar with that just launched preferred shares under the symbol APE.

But instead of getting roped into meme stocks, we’re encouraging all of our readers to stand up and be real investors.


Snippet No. 3: Not Ready to Retire Just Yet

Target Corp. (TGT) had a mandatory retirement age of 65… But not anymore.

Target CEO Brian Cornell is 63, just two years away from Target’s mandatory retirement age of 65. But last week, TGT changed the policy, and Cornell will now stay at the helm for three more years.

As a former executive at both Walmart Inc. (WMT) and PepsiCo Inc. (PEP), Cornell already had an impressive pedigree in retail before taking over as Target’s CEO in 2014. And he’s since been credited with helping revitalize Target after its massive data breach issue.

So for current TGT shareholders, Cornell staying put should be welcome news that at least provides the company with stability during a tumultuous time.

The company’s latest earnings report revealed quarterly profits had dropped 90% from the same period in 2021, and Target warned that it was going to have steep markdowns to get rid of unwanted inventory.

Target claims it is positioned for a rebound, but we aren’t taking that at face value.

Because according to our Health Indicators, now is not the time to be betting on a rally.

TGT is in the Red Zone, the stock price is in a downtrend, and it’s a medium-risk investment with a Volatility Quotient of 23.76%. 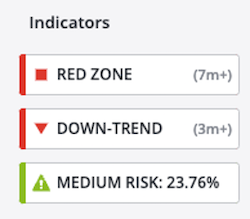 Instead, a brighter spot in the retail sector is BJ’s Wholesale Club Holdings Inc. (BJ).

In its last earnings report, BJ’s reported a revenue beat of $5.1 billion compared to expectations of $4.7 billion. It also increased its same-store sales by 7.6% year-over-year (YoY).

“Our business model is designed to work well in the current consumer environment where value is king and we believe we are well-positioned for growth by doing what we do best — delivering great value to our members,” CEO Bob Eddy said.

Although fuel costs have somewhat lowered, food costs are still high. And there’s plenty of anecdotal evidence we’ve all experienced with grocery store shelves being empty.

With a membership at BJ’s Wholesale Club, not only can members buy food in bulk at discounted prices, but some locations also have gas stations, propane filing, and optical departments, offering a one-stop shop for everything you need.

We’ll keep you in the loop on new opportunities coming later this week.