With the constant bombardment of news, investors are getting decision fatigue, not knowing what to do with what they are hearing.

With TradeSmith Snippets, we’re here to tell you what really matters. We run these ideas through our proprietary trading tools to give you actionable information, spotlighting places to make money and warning about the potholes that can wipe out that money.

All while doing it in a format that maximizes your time.

We received such a tremendous response when we launched TradeSmith Snippets last week that I wanted to make sure that this was a regular feature you could look forward to in TradeSmith Daily. I’ll let our team take it away from here.

On July 21, Snap Inc. released earnings, and while it managed to increase revenue by 13% year-over-year to $1.11 billion and even boost Daily Active Users (DAUs) by 18%, SNAP is in the doghouse.

The company announced that demand is slowing for its online platform due to more competition from TikTok and the challenging economic environment.

The day after the earnings report was released, the stock plummeted nearly 40% and crash-landed just under $10.

But what has been most curious from the earnings report was the plan for SNAP to offer a 2-for-1 stock split if the share price eventually reaches $40.

Generally, a company splits a stock that’s perceived as expensive to garner more interest, and data from the Chicago Board Options Exchange (CBOE) shows that depending on the company, stock splits can drive additional participation from retail investors.

But with SNAP, the requirement to meet the $40-per-share benchmark seems odd, considering that the stock price would have to quadruple from its current level to meet that goal.

This appears to be a gimmick enabling the co-founders to eventually sell their non-voting stock and to redirect attention from their flagging revenue and earnings miss.

SNAP exhibits sky-high risk and is currently in our Red Zone (think of this as a stop light). 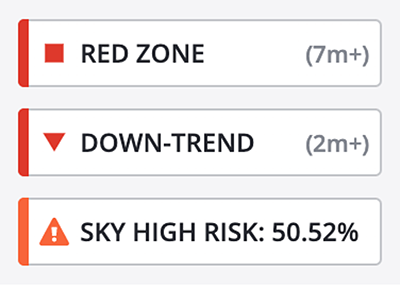 Staying in the realm of stock splits, an alternative to SNAP to put on your radar is CTO Realty Growth Inc. (CTO).

This retail-oriented REIT manages commercial as well as single- and multi-tenant income-producing properties, and it executed a 3-for-1 stock split on July 1.

It has a massive dividend yield of 6.9%, is sitting firmly in our Green Zone (a healthy state), and has a medium-risk Volatility Quotient (VQ) of 27.97%.

As you can see in the image below, it’s faired a lot better than SNAP over the last 12 months, and our system still classifies it as a “buy.”

Snippet No. 2: Coinbase Versus the SEC

The Securities and Exchange Commission (SEC) is taking aim at a former Coinbase Global Inc. (COIN) product manager and two other individuals over insider trading.

The SEC alleges that a former Coinbase manager tipped off his brother and his friend about cryptocurrencies that would be listed on the Coinbase exchange.

Because Coinbase is a well-recognized platform, any time it lists a new cryptocurrency, that cryptocurrency receives increased attention, which can initially lead to higher prices.

Having inside information about the new coin listings netted the individuals profits of more than $1.1 million.

What will happen in this case depends on the argument of whether cryptocurrencies — or at least some of them – should be classified as securities.

Coinbase argued in the ongoing suit that it does not list any securities.

A recent congressional hearing on the “Future of Digital Asset Regulation” wrestled with the concept of whether certain cryptocurrencies were really securities, and as such, would fall under the purview of the SEC.

There was no satisfying conclusion to the hearing. However, there is a standard, called the “Howey Test,” that’s used to determine whether a financial opportunity meets the requirements of an investment contract, and is therefore a security.

The problem is that the Howey Test was developed in 1946 (as a legal defense in a lawsuit) and couldn’t possibly foresee the current digital financial landscape.

As the battle rages on for how to classify cryptocurrencies, that hasn’t stopped TradeSmith Senior Crypto Analyst Joe Shew and his team from guiding our members on what to do and how to make money.

Joe’s Head Analyst, Sam MacDonald, made a prediction about Quant (QNT), which works with financial institutions to help them exchange information and assets more securely through blockchain technology.

On July 27, Sam shared technical analysis that showed the QNT price could climb 63% higher with a mid-term time frame. By the end of the following day, the price had already climbed 12%.

With new COVID-19 variants forming and the monkeypox spreading around the world, it’s clear that we are going to need continued work on vaccines and treatments… and when companies make medical breakthroughs, their stock prices will get short-term boosts.

However, as always, we want to take the emotion out of investing.

Let everyone else run out and buy SIGA and INO on one piece of news.

We’ll use our trading algorithms to put them through the ringer.

SIGA is in the Green Zone and has been in an uptrend for over a month, well before the announcement. It does present a high-risk VQ of 40.65%, but clearly, it’s heading in the right direction.

Source: Google Finance
Conversely, INO has been in the Red Zone for seven months, in a flat sideways trend, and presents a sky-high risk with a VQ of 81.82% (yikes).

That concludes this week’s edition of TradeSmith Snippets. But we’d love to hear what you think.

Snippet No. 2: Coinbase Versus the SEC

The TradeSmith team would love to hear what you have to say.