In this week’s edition, our team will cover:

I’ll let them take it away from here.


Snippet No. 1: The Gig Could Be Up for Uber and Lyft

A new proposal from the U.S. Labor Department would classify gig workers — like delivery drivers — as employees instead of independent contractors.

If current independent contractors become employees, companies like Uber and Lyft will be required to pay a minimum wage, cover a portion of Social Security taxes, contribute to unemployment insurance, and provide overtime pay.

It’s been projected that employee-related expenses could cost $508 million for Uber and $290 million for Lyft.

The stock price for both Uber and Lyft, already on a downward trajectory, was not helped by the Labor Department’s proposal on Oct. 11.

This proposal and the uncertainty it has created around how gig workers will be classified toss in another reason to stay away from both companies.

And in case you missed it, Senior Analyst Mike Burnick also shared a list of companies that should be nowhere near your portfolio heading into 2023.

There are some new projections on how much revenue Netflix can generate from its ad-supported membership tier.

Ad-supported memberships are expected to generate $4.6 billion by 2026.

Mike Burnick has previously said that Netflix will be the “buy of the century,” and with the stock price down more than 60% so far this year, it may seem like a good time to start scooping up shares.

But he wants to see two things happen first.

The first is an improvement to Netflix’s subscriber count.

The ad-supported tier, which will start in the United States for $6.99 per month on Nov. 3, could help bring back former subscribers and attract new ones, but it is going to take some time to see if the cheaper membership tier does in fact increase subscriber count.

The second thing Mike is waiting for is a buy signal from our tools.

Currently, our Health Indicator has Netflix in the Red Zone, and the RSI (Relative Strength Index) is at 50.87 as of this writing.

Being in the Red Zone, NFLX is considered in an “unhealthy” state, and with its RSI of 50.87 (an RSI below 30 is considered a buy signal), we have a clear indication to stay away for the time being.

With that being said, if you want to be ready to pounce on the stock when it enters our Green Zone or triggers an Early Entry Signal, you can add it to a watchlist so that you are ready to make a move when the time is right.

PayPal says that it erroneously published information stating it would punish users for spreading misinformation with a $2,500 fine.

The reaction to the news from PayPal users appeared to be swift, as Google searches for the phrase “delete PayPal” were up 1,392% after PayPal’s announcement and apology.

PayPal has been in our Red Zone for almost a year, and this PR nightmare doesn’t help anything.

But the spike in Google searches and social media mentions surrounding this debacle is a valuable investing clue.

And we know a guy who has the expertise to make sense of all this and is already thinking about where disenchanted PayPal users may flock to.

Our friend Landon Swan is the co-founder of LikeFolio, which he created with his brother to analyze social data to understand consumer behavior before it becomes news on Wall Street.

In a recent interview on the TD Ameritrade Network, Landon shared more insight into why PayPal shares have been battered this year, the significance of its recent PR issues, and the companies and investable opportunities he’s watching that could be the winners from PayPal’s fallout.

You can watch Landon’s interview by clicking the image below. 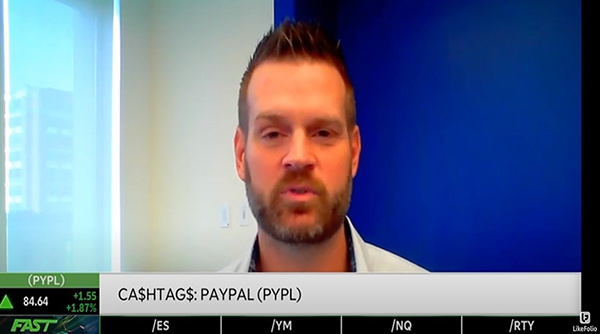