Welcome to the newest issue of TradeSmith Snippets.

The drama surrounding Elon Musk buying Twitter Inc. (TWTR) is coming to a conclusion, and investors who bought TWTR shares on the belief Musk would follow through on his end of the deal could be in line for a payday.

But whether the risk was worth the reward is another story — one that we’ll cover for you in just a moment.

Our second snippet focuses on an upcoming biotech IPO…

So far, 2022 has offered the fewest IPOs since 2016. But there’s a company that’s about to go public with breakthrough DNA technology, which it believes has the potential to repair 90% of known disease-causing mutations.

We’ll show you what the most recent data reveals about investing in IPOs so you can be ready.

Finally, we’ll see if the Federal Reserve’s fight against inflation is working before the latest data for September gets reported on Oct. 13.

Of course, we’re not just reporting the news here. We’re also sharing opportunities you can invest in today and the stocks to avoid — all with a focus on separating the noise from what’s most important.


Snippet No. 1: The Oct. 28 Countdown for Elon Musk and Twitter

Elon Musk made an offer to buy Twitter at $54.20 per share, tried to get out of the deal, and is now saying he will follow through with his original offer. 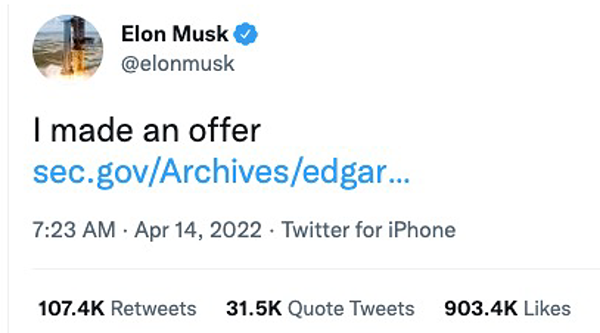 Source: Twitter
Since then, things have gotten messy: Musk said on May 17 that the deal was on hold because of his concerns over fake accounts on Twitter. That was before he tried to terminate the deal on July 8 over claims that Twitter did not provide enough information about the prevalence of spam and fake accounts. A few days later, Twitter sued Musk. Then, earlier this month, Musk agreed to buy Twitter at his original offer price of $54.20 per share.

Twitter’s lawsuit has been halted until Oct. 28.

If the deal doesn’t close, a trial will be scheduled for November.

TWTR would fall into the arbitrage investing category. The stock opened at $48.37 on the day (April 14) Musk announced he wanted to buy Twitter for $54.20 per share, which would be a 12% premium if the deal went through.

But when it comes to arbitrage investing, there is no guarantee that a deal will close, and Musk’s sensationalism has brought up concerns over his seriousness about making an acquisition happen.

Exhibit A: Musk trying to back out of the deal on July 8.

Although a deal finally appears imminent, depending on your risk tolerance, this could easily fall into an “opportunity” to avoid.

You would be “stuck” with shares of Twitter if the deal didn’t go through. And there may not be interested parties who would pay anywhere close to what Musk was willing to pay for the company.

From its Q2 earnings report, Twitter’s revenue is down year-over-year (YoY). And with operating expenses ($1.52 billion) now exceeding gross profits ($1.18 billion), the company reported an operating loss of $344 million.

For more evidence that the premium may not have been worth the risk, TWTR has been in our Red Zone since Nov. 18, 2021, making it a stock to avoid for almost a full year now.

While Twitter may be gobbling up the most attention, other arbitrage investing opportunities are out there.

Let us know if you would like to see our team cover more on arbitrage investing by sending an email here.

Prime Medicine, a gene-editing treatment company, has filed for an IPO to sell its stock on The Nasdaq Global Market under the symbol PRME.

Prime Medicine is focused on advancing a type of medical technology called “prime editing.” Prime editing is meant to be more precise than CRISPR-based technologies, so much so that Prime believes it can eventually cure, halt, or prevent genetic diseases.

Its breakthrough tech works by finding segments of faulty DNA that prevent our bodies from operating properly and replacing them with a correct copy of DNA.

Prime has yet to conduct a clinical trial, but it is starting work on a chronic blood disorder called sickle cell disease.

Prime has 18 programs in the pipeline.

Historically, Bank of America found that a company’s stock price climbs 14% in the six months after its IPO.

For 2021, that trend was reversed, with the average company’s stock price dropping 14% after an IPO as investors worried about rising interest rates, inflation, and a looming recession.

With those fears continuing into 2022, companies have decided that this is not the best time to go public.

There’s no crystal ball to tell us how the Prime Medicine stock price would perform. But if 2021 is any indication, we could see a negative performance in its first six months out of the gate.

For the longer term, Prime is a stock worth adding to your watchlist.

The global prime editing and CRISPR market value is expected to increase by nine times from 2020 to 2030. And Prime Medicine believes that prime editing technology could — in theory — repair 90% of known disease-causing mutations across many different organisms, organs, and cell types.

For those who believe gene editing investments will bring about long-term gains, there’s Prime partner Beam Therapeutics Inc. (BEAM), which has rights to certain programs developed by Prime. Our Health Indicator places BEAM firmly in the Green Zone.

It is still a very risky stock to buy, with a Volatility Quotient of 74.56%, and everyone has their own appetite for risk and personal financial situation to consider. But we wanted to make sure BEAM is on your radar.

If you would like to see a full report covering BEAM and hear more about gene-editing stocks, share your thoughts here.

On Oct. 13, inflation data for September 2022 will be released in the latest CPI (Consumer Price Index) report.

CPI is the most well-known indicator of inflation. Forecasts for September are 8.1%, a slight decline from the 8.3% reported for August.

People continue to pay high prices for meat, poultry, fish, eggs, fruits and vegetables, airline fares, electricity, and rent. And consumers are having to make hard decisions about paying for things that are essential over things that are nice to have.

At the end of May, TradeSmith Senior Analyst Mike Burnick said he was convinced that inflation was here to stay, and emphasized the importance of owning high-quality companies that pay out dividends with yields between 2% and 7%.

Mike says that dividend payouts often rise with inflation and that stocks that consistently boost their dividends during inflationary times most often outperform the market.

For his Dividend on Demand subscribers, Mike screens for the companies in our Green Zone with dividend yields between 2% and 7%, checks that the stocks are in an uptrend or side-trend, and then filters out companies that have low or nonexistent free cash flow.

When Mike recently ran his screener, he found 26 blue-chip stocks, with three standouts:

Amgen is a biotech company whose highest-selling product is the arthritis drug, Enbrel. As of this writing, it pays a dividend yield of 3.39%.

Conagra Brands is the packaged food company behind many brands that could be in your house as we speak: Slim Jim, Orville Redenbacher’s, Birds Eye, Reddi-Wip, Marie Callender’s, and more. Its dividend payout has a yield of 4.02%.

Known for its soup, Campbell also has brands like V8, Prego, Goldfish, Pepperidge Farm, Synder’s of Hanover, and a few more staples people constantly reach for in the grocery aisle. Campbell’s dividend payout has a yield of 3.17%.

If you’d like to hear more from Mike about inflation-resistant stocks like these, let us know here.

Have a great start to your Tuesday, and we will see you tomorrow.