The Federal Reserve raised its benchmark rate by 0.5% last Wednesday, and while that might not seem like much, it’s the most important development for the stock market this month.

But there’s something else that also needs to be on your radar, as the U.S. Treasury market is now at a critical juncture.

Many traders and investors use the 10-year U.S. Treasury yield as a key barometer for the health of the Treasury market.

And it just crossed the 3% rate threshold for the first time since 2019. 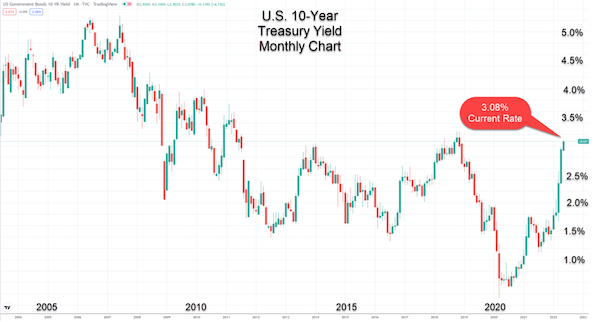 Source: TradingView
Why does this matter? And more importantly, how can we use this knowledge to inform our investing decisions?


Inflation and the Fed

To comprehend the importance of the 3% threshold, we need to step back and understand the key drivers of inflation.

Supply shortages and heavy demand continue to push prices higher, and the graph below shows how this happens. 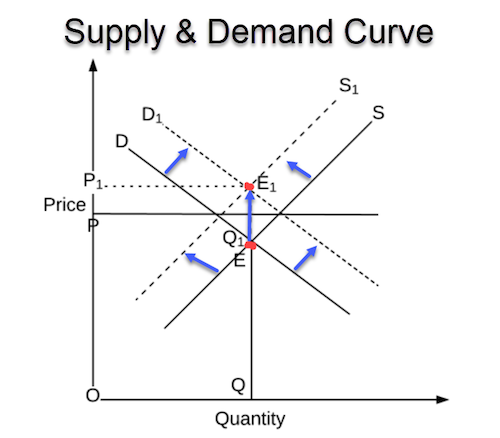 An increase in demand shifts the demand curve (D) to the right (D1), while a decrease in supply (S) shifts the supply curve to the left (S1). This moves the equilibrium (E) to a new spot (E1).

That new equilibrium is at a higher price.

Unfortunately, we have not found that spot yet, which is why prices continue to rise.

Now, what economics textbooks don’t teach you is how psychology works.

When inflation gets really bad and goes on for long enough, it starts to run away, creating a cascade failure that leads to an economic collapse. The supply and demand curve above keeps shifting, pushing the equilibrium price higher and higher at faster rates.

Is that likely to happen, even without the Fed’s intervention? No. But it can, and the effects are catastrophic.

So how does the Fed actually change the situation?

As you probably know, people pay for goods and services with cash or debt.

The Fed can’t do anything about cash. However, it can make debt more expensive.

By raising interest rates, it pushes up the rates for everything else in the economy, from mortgages to credit cards.

No joke, the average 30-year fixed-rate mortgage is now at 6.75%, compared to just above 4% in February. 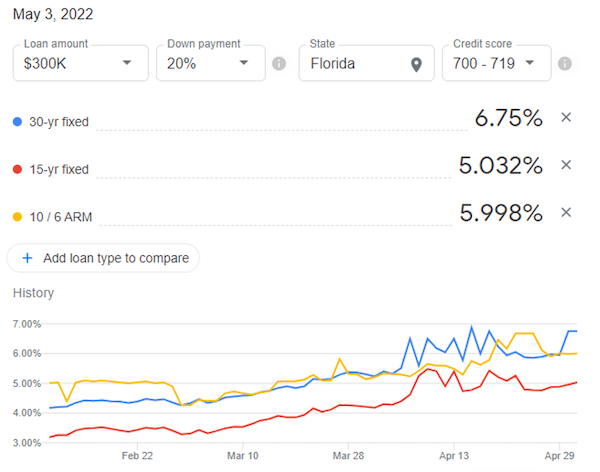 Source: Google
Now imagine that same scenario playing out on different types of debt across the economy, and you can start to see that higher interest rates are kind of like a price increase, just one controlled by the central bank.

On the flip side, savers who put their money in bank deposits such as Certificates of Deposit (CDs), savings accounts, and the like can earn higher interest.

That’s why stocks often decrease in value as rates rise. When you can earn more from safer investments like the U.S. Treasury debt, stocks need to entice you with more value to take on the risk. The best way to do that is to make the share price cheaper.

All this is great, but what does it have to do with the 3% threshold?

For the last couple of months, U.S. Treasury prices have been in a free fall.

Normally, they trade in a range, acting as a hedge against stocks. That’s why you typically see bond prices rise and stock prices fall, or vice versa.

First, as I noted earlier, as Treasury debt pays more and more, stock prices have to offer more value.

Second, as rates rise, so does the cost to service debt. With many companies taking out massive loans during the pandemic, they’ll either need to pay off the debt or accept higher interest payments. In either case, there isn’t as much cash left over for share buybacks or dividends.

The 3% threshold isn’t a magic percentage per se, but it has acted as resistance in the past. 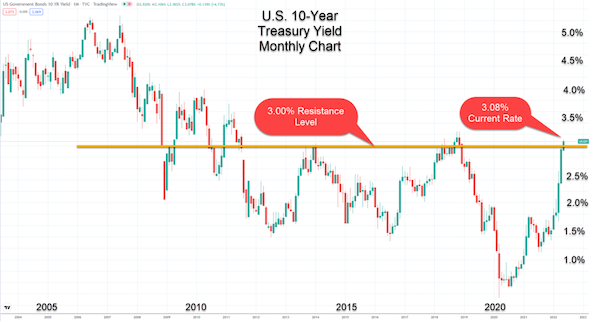 Source: TradingView
The orange trendline marks where 3% is on a monthly chart of the 10-year U.S. Treasury yield.

Is it possible for it to go higher from here? Absolutely. In fact, I suspect it will.

But in the short term, it’s likely to struggle to simply bust through.

And that creates an interesting opportunity.

One of the worst performers in the past few months has been the iShares TIPS Bond ETF (TIP). 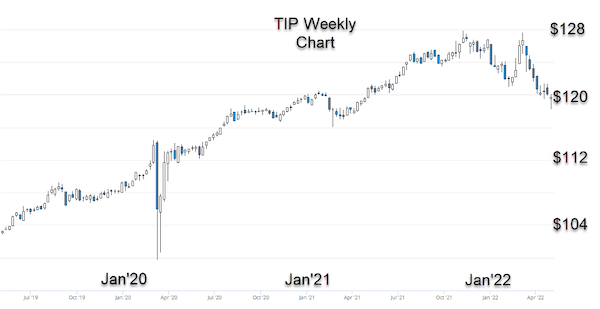 Source: TradeSmith Finance
TIP is different from other bond ETFs because it invests in Treasury Inflation-Protected Securities (TIPS). These bonds are indexed to inflation so that the par value (principal) of the bond increases with inflation and decreases with deflation as measured by the CPI.

TIPS mature at various times, with the TIP ETF holding a basket with different maturities and an average weight of roughly seven and a half to eight years.

The dividend yield isn’t much, only coming in at 1.33%. However, these payments do rise with inflation.

Now, you might be asking, why would the TIP ETF drop if inflation is high?

As the Fed raises interest rates, the prospects for inflation decrease.

TIP tends to rise and fall with the overall price of bonds, the 10-year usually being a good approximation.

Now, if we expect that the 10-year yield has reached a temporary peak, that naturally means that the price of the 10-year bond could increase. Accordingly, the price of TIP would find support and potentially see a bounce.

However, the overall trend here is bearish, and our Health Indicator puts the ETF’s health in the Red Zone.

So, a way you could play a possible bounce or at least a halt in the decline of TIP is to use a put credit spread.

This trade would allow you to turn a profit as long as the price of TIP stays at or above the strike prices by expiration.

Plus, if stocks really begin to plunge, odds are that the Treasury market, including TIP, will see a rebound.

This is just one of many ideas for investing and trading in this rate-hike environment.

What other strategies do you see working in the coming months? Which would you like to hear more about?