So, is this the end of the road for rising commodity prices? Is the bull market in resource stocks over?

Not by a long shot.


I believe a multi-year supercycle is starting to form.

But before I share why, let me give a little background on how we got here.

Commodity prices suffered during the start of the pandemic, with oil facing the steepest declines because of restrictions on transportation.

But go back even further and you’ll see that commodity-producing industries have suffered a record lack of capital investment, with $341 billion invested in the oil and gas sector in 2021 compared to $700 billion in 2014.

That’s because commodity production is dirty work; it’s viewed as unsustainable and harmful to the environment.

And today’s new generation of ESG-minded (Environmental, Social, Governance) investors are shying away from the sector in droves.

After all, no self-respecting ESG fund manager wants to explain to investors, or to their board of directors, why they’re overweight in energy. Having Exxon Mobil Corp. (XOM) and Freeport-McMoRan Inc. (FCX) among your top 10 holdings can be a serious career risk as a money manager these days.

This means commodity-producing stocks have been out of favor in a big way.

As a result, these companies can’t easily access new investment, which means they have to cut back significantly on investing in new production. Scarcity of new investment is visible in every commodity market, from aluminum smelting to zinc mining. And it’s been especially troubling in the oil and gas sector.

In fact, the ESG-centric European Union (EU) is now finding this out the hard way. Winter is coming and Europe has dwindling natural gas reserves after Russia, its largest supplier, shut off the taps.

Don’t get me wrong — I have nothing against ESG investing, per se.

But a big issue is that the ESG crowd wants so desperately to believe renewable energy can replace fossil fuels at the snap of a finger.

The trouble is that the world is not yet at a point where adoption of electric vehicles or solar is feasible on a large enough scale to completely replace fossil fuels.

While it’s a worthy mission to try to tap into more renewable energy sources, the unrealistic expectations of how fast renewable energy could be more widely used has caused a significant underinvestment in commodity supply. Capital expenditure in oil and gas and global mining fell by around 40% between 2011 and 2021. And today’s rising geopolitical tensions aren’t helping matters.

Just look at Russia’s use of energy as a weapon against the EU, or at China’s increasingly menacing behavior as it scrambles to secure more resources for itself. 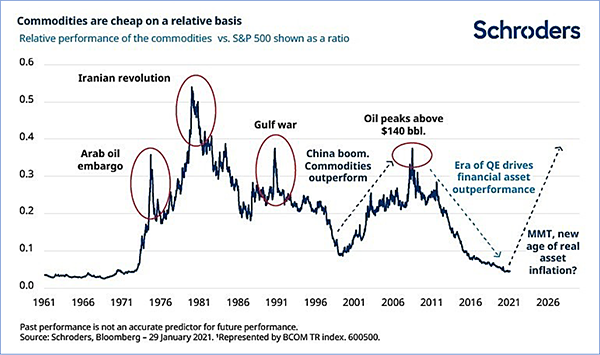 This has all the earmarks of creating an energy supply shock of historic proportions. Also, as you can see above, commodities are historically cheap today compared to equities, according to analysts at Schroders.

The ebb and flow in performance between stocks and commodities is highly cyclical and has been going on for many decades. Commodity supercycles are typically triggered by supply shocks, like the Arab oil embargoes in the 1970s, as well as by conflicts, like the Gulf War in the early 1990s or the war on terror in the 2000s.

Those periods led to huge and sustained price gains for commodities across the board, especially energy. Not coincidentally, major turning points in performance tend to often take place when stocks are expensive and commodities cheap, or vice versa.

And it’s pretty plain to see exactly where we are in the cycle now.


After years of easy money printing by the Federal Reserve and other central banks, stocks have performed very well relative to commodities over the past 15 to 20 years. By 2021, stocks were expensive and commodities cheap.

But now conditions have changed… and the cycle is turning.

Led by the Fed, central banks worldwide are now raising interest rates, which is tightening financial conditions. At the same time, we’ve had many years of underinvestment in mining and energy production, as stated above.

Add it all up and it is a very bullish combination for commodities compared with stocks in the years ahead.

That’s why the recent pullback in the price of commodities, and in the stocks that produce them, is likely to be a wonderful longer-run buying opportunity.

The next time you hear from me in TradeSmith Daily, I’ll share a few of my favorite commodity plays.

Special-Situation Central: Play the Arbitrage Game on This Stock to Spark a 25% Profit Opportunity

In Case You Missed It: The TradeSmith Daily Week in Review