When the hit television show “The Office” ended, Andy Bernard, a character who was always dressed to impress and wouldn’t let anyone forget he went to Cornell University, was quite poignant when reflecting on his time working at the fictional Dunder Mifflin Paper Company. 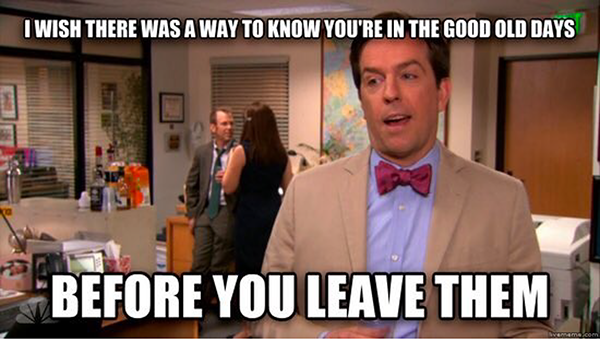 Source: Twitter
Looking at the markets for most of 2022, many folks wish they knew that the time following the COVID-19 market crash would be considered the good old days.

Everyone was flush with cash, thanks to the Federal Reserve’s runaway money printing and the stimulus checks from Washington, D.C.

Locked down at home with little else to do, millions of new day traders put their stimulus checks straight into the stock market.

Meme-stock investors were born, and many got rich quick.

Lots of those newly minted, get-rich-quick day traders now long for the return of those glory days… well, minus the pandemic part, of course.

Analysts at SentimenTrader.com recently pointed out that all that easy money earned by pandemic-era retail investors has vanished.

Specifically, small stock options traders earned more than $1 billion in quick profits in 2020. But they are now in the hole to the tune of more than $500 million in losses since then.

But for anyone yearning for better days and feeling leery about this recent rebound attempt, I’m still seeing some light at the end of the tunnel. 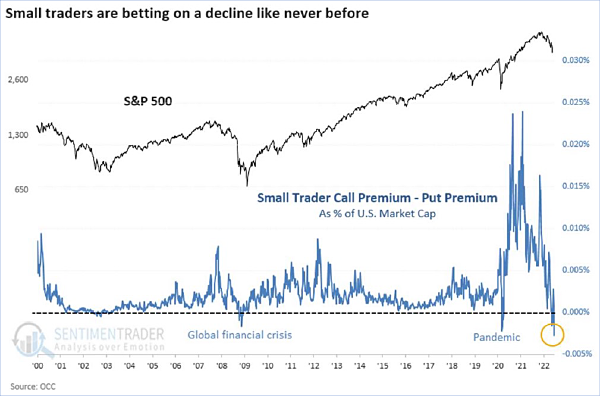 The chart above displays call premiums minus put premiums for small retail option buyers going back more than 20 years. As you can see in the chart above, small options traders are more bearish right now than ever before. And that’s bullish!

Two things stand out to me:

That’s another great contrary indicator that stocks are extremely oversold and overdue for at least a bounce. 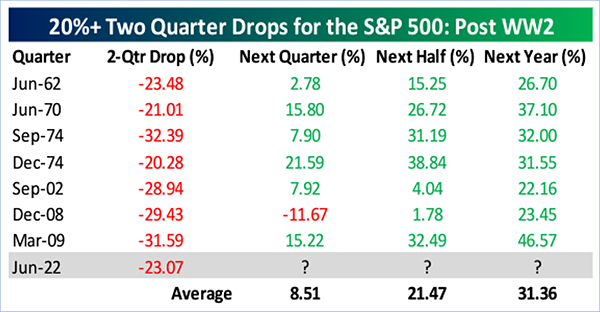 Well, you can see in the table what happened next.

After these other extreme sell-off signals, stocks surged higher by an average of 31.36% over the next year.

Now let’s put this all together.

All of this tells me that stocks are far more likely to move higher over the next year than lower. Heck, there are favorable odds that stocks will be higher by the end of 2022, which is just six months from now.

Add it all up and it makes a very strong case that the bottom is already in, or at least very close. Note from the table above that the S&P dropped 29.43% in the fourth quarter of 2008 during the financial crisis. Stocks then slid another 11.67% in the first quarter of 2009.

There could certainly be some more downside, but the reward-to-risk ratio is sky-high: a potential 31% reward versus an 11% risk.